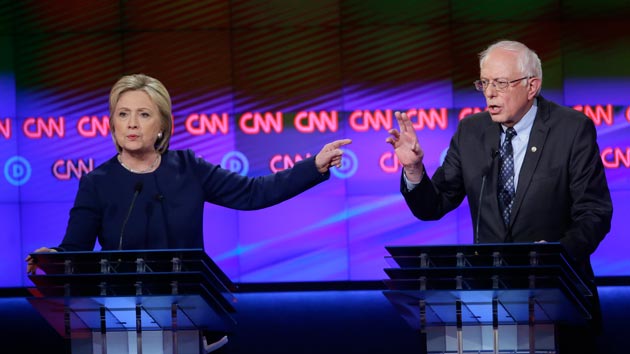 During Sunday night’s Democratic debate, hosted by CNN at the University of Michigan in Flint, Hillary Clinton and Bernie Sanders answered several questions posed by residents of the city that is still reeling after lead-tainted water flowed through its pipes for 18 months. With just a few days to go until the primaries on Tuesday in Michigan, where 147 delegates will be at stake, these audience members and moderators Anderson Cooper and Don Lemon pushed Sen. Sanders and former Secretary of State Clinton to answer tough questions about poverty, religion, dismal schools, and whether the pair’s fairly recent interest in Flint is just a political tactic. Later in the debate, the candidates also tussled on guns, race, Hillary’s Wall Street speeches, fracking, and more. Notably, they spent hardly any time discussing their combative Republican rivals.

Here were the must-see moments:

1) Bernie and Hillary rip into the handling of the Flint crisis. Both called for Republican Gov. Rick Snyder’s resignation—for the first time, in Clinton’s case. Clinton went on to blast the state government for its response to the crisis. “It is raining lead in Flint, and the state is derelict in not coming forward with the money that is required,” she said. As the crowd applauded, Sanders criticized the city’s sky-high water bills—calling for a retroactive refund of the bills that residents paid for lead-tainted water.

2) A Flint mom asks what the candidates will do about lead contamination. LeeAnne Walters, a mother of four from Flint who was partly responsible for exposing the crisis, asked the candidates if they would make a “personal promise” that they would require all lead service lines removed within their first 100 days in office. Sanders promised to make sure every water system was tested, while Clinton went further, saying she would commit to “remove lead from everywhere” within five years.

3) Bern-splaining: “Excuse me, I’m talking.” Sanders used a question about keeping manufacturing jobs on US soil to return to his familiar line of attack against Clinton: her support of various international trade agreements that led to the outsourcing of jobs. He mentioned the North American Free Trade Agreement (NAFTA)—recalling his days of picketing against the agreement in the ’90s—and the Trans-Pacific Partnership (TPP), noting, “American workers should not be forced to compete with people in Vietnam today who make a minimum wage of 65 cents an hour.”

Clinton interjected that Sanders voted against the auto bailout in 2009, which saved millions of auto industry jobs, including many in Michigan. Sanders cut her off and said, “Excuse me, I’m talking.”

“If you’re going to talk, tell the whole story,” Clinton shot back. It was a rare moment of heat in a debate that never turned nasty.

4) Sanders asks Clinton to release her Wall Street speeches and announces that he’s releasing his own. Sanders avoided discussing the auto bailout by noting that Clinton has a super-PAC raising millions of dollars for her campaign, while Sanders does not, and that Wall Street generously paid her for speeches. Once more, Sanders called for Clinton to release the transcripts of those speeches. “I kind of think if you get paid a couple hundred thousand dollars for a speech, it must be a great speech,” Sanders said.

Clinton responded by saying she’d release her transcripts if all the other candidates, including the Republicans, did the same with their own Wall Street speeches. Host Anderson Cooper asked Sanders if this answer was sufficient for him. Sanders shot back, “Well, I’m your Democratic opponent, I release it, here it is,” Sanders said, pretending to toss his own transcripts into the air. “There ain’t nothing! I don’t give speeches to Wall Street for hundreds of thousands of dollars.”

5) Sanders says the Democrats aren’t always right. Clinton supports the Export-Import Bank’s assistance to small businesses, but Sanders voiced his opposition to the bank, a federal agency that lends money to businesses that export their goods globally. CNN’s Anderson Cooper asked Sanders to explain why, pointing out that every other member of the Democratic caucus supports the Export-Import Bank. “You’re agreeing with Senator Ted Cruz on this,” said Cooper. “Well, I don’t want to break the bad news,” Sanders responded. “Democrats are not always right.”

6) CNN anchor Don Lemon asks about “racial blind spots.” “In a speech about policing, the FBI director borrowed a phrase from the Broadway musical Avenue Q, saying, ‘Everybody is a little racist,'” said Lemon. “On a personal front, what racial blind spots do you have?” Both candidates pledged to address institutional racism but acknowledged they couldn’t fully understand what it’s like to be a person of color in America. “I can’t pretend to have the experience that you have had and others have had,” said Clinton. “But I will do everything that I possibly can to not only do the best to understand and to empathize, but to tear down the barriers of systemic racism.”

7) Hillary slams Bernie about guns. Clinton and Sanders clashed about the liability of gun manufacturers for deadly shooting situations after Anderson Cooper mentioned a lawsuit filed by the parents of children killed in the 2013 mass shooting at Sandy Hook Elementary School. In 2005, Sanders voted for a bill that gives legal immunity to gun manufacturers, and he tried to explain his position. An incensed Clinton cut in: “That is like the NRA position. No.” She insisted on finishing her point as Cooper tried to move the debate forward. “I want people in this audience to think about what it must feel like to send off your first grader—little backpack, maybe, on his or her back—and then the next thing you hear is that somebody has come to that school using an automatic weapon, an AR-15, and murdered those children.”

One of the most powerful moments @HillaryClinton has had in a #DemDebate so far. pic.twitter.com/nBnswzLsKy

8) Bernie and Hillary talk fracking. In response to a University of Michigan student’s question about each candidates’ support of fracking, Clinton presented a laundry list of conditions that companies would have to meet in order to frack safely, before concluding that “by the time we get through all of my conditions, I do not think there will be many places in America where fracking will continue to take place.” Sanders countered, “My answer is much shorter: No, I do not support fracking.”

9) Bernie mentions mental health…of the Republican candidates. The Democratic candidates did not address the implosion of the Republican Party or Donald Trump. The closest they got was during exchange when Clinton said, “Compare the substance of this debate with what you saw on the Republican stage last week.” Sanders added, “When you watch these Republicans debate, you know why we need to invest in mental health.” The conversation quickly moved on, without additional details on improving the mental health system.

10) Bernie talks frankly about Judaism, and Hillary talks about prayer. Sanders is Jewish, but he has not spent much time discussing his religion on the campaign trail. When he was asked about keeping his Judaism “in the background,” Sanders spoke frankly about what it was like growing up with the knowledge that his father’s family was wiped out by the Holocaust. “I know about what crazy and radical and extremist politics mean,” he said. “I am very proud of being Jewish and that is an essential part of who I am as a human being.” Clinton, who has spoken more extensively about her religious faith, was asked about prayer. She said she prays regularly for those going through difficult times and for those in positions of authority. “I am a praying person,” she said. “And if I haven’t been during the time I was in the White House, I would have become one. Because it’s very hard to imagine living under that kind of pressure without being able to fall back on prayer and on my faith.”