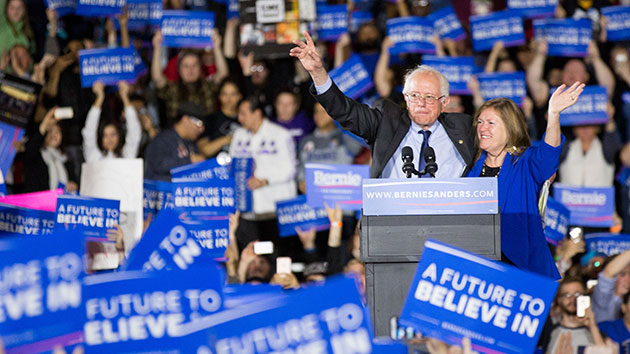 UPDATE 2, March 27, 7:32 a.m. EST: Bernie Sanders notched another big win, crushing Hillary Clinton in Hawaii’s caucuses to go three for three on Saturday. With 88 percent of precincts reporting, Sanders had more than 70 percent of the vote.

UPDATE 1, March 26, 6:28 p.m. EST: Sanders won Saturday’s Democratic presidential caucuses in Washington. With 31 percent of precincts reporting, the Associated Press and other news agencies projected that Sanders would be the winner. Sanders had 76 percent of the vote to Clinton’s 24 percent. Washington is the largest prize of the day, with 101 delegates, and delegates will be awarded proportionally. (Many of the Republican contests allot delegates on a winner-take-all basis.)

In a rally on Saturday in Madison, Wisconsin, where Sanders is campaigning ahead of the April 5 primary, the candidate reveled in the back-to-back wins. “I think it’s hard for anybody to deny that our campaign has the momentum,” he said.

Bernie Sanders: “I think it is hard for anybody to deny that our campaign has the momentum” https://t.co/DkPyle0Wrv https://t.co/2fVmMkEYOD

Bernie Sanders won the Democratic presidential caucuses in Alaska on Saturday. With 38 percent of precincts reporting, the Associated Press and NBC  called the race for Sanders at 2:30 p.m. PST. Sanders had 78 percent of the vote and Clinton had 21 percent.

Results will come in later today for the Democratic caucuses in Washington state and Hawaii. Sanders is expected to win big in Saturday’s Washington caucuses, where 101 delegates are up for grabs.

Clinton started the day with a substantial lead in pledged delegates: 1,223 for Clinton to 920 for Sanders. That doesn’t include the unpledged “superdelegates,” among whom Clinton also holds an overwhelming lead.

We’ll update this story when more results are available.