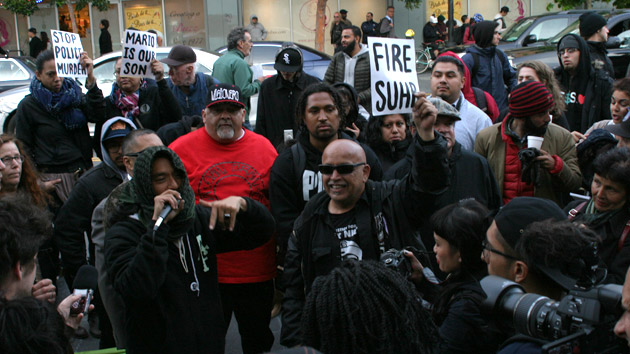 At the corner of 17th and Valencia Streets in San Francisco late Tuesday afternoon, a group of about 20 protesters remained camped outside the Mission Police Station, fueled by coconut water, vitamin supplements, and cars honking in solidarity. Several were in the sixth day of a hunger strike. Their goal: The ouster of San Francisco Police Chief Greg Suhr and his boss, Mayor Ed Lee, over a string of police violence and alleged misconduct.

A stash of rations sat near the entrance of the station, where last week five people began the protest: Maria Cristina Gutierrez, Ilyich Sato, Sellassie Blackwell, Ike Pinkston and Edwin Lindo. The demonstrators also set up three tents on a nearby corner. Gutierrez, a short, soft-spoken woman who runs a neighborhood preschool, has also at times escaped the cold evenings in her van parked across the street.

The group had pondered the decision to stop eating for several months, the organizers told me. What compelled them to go forward with the plan was the latest police shooting in San Francisco: In early April, a homeless man, Luis Gongora, allegedly brandished a knife at officers, who responded with fatal gunfire.

Ilyich Sato, who performs locally as a rapper, sat in a blue camping chair, musing about the mothers of two other recent victims of police shootings. “It’s the inspiration of the families,” he said. “Alex Nieto’s mother. Gwendolyn Woods—Mario Woods’ mother. I think of them every day I’m out here.”

Clad in a striped beanie and brown jacket, Edwin Lindo, an education consultant and community advocate who is currently running for the city supervisor seat covering the Mission district, said he hasn’t eaten since April 20. “My body is fragile,” he said. “My mind and spirit is at a level I’ve never experienced in all my life.”

The group of demonstrators at Mission Police Station pointed to four recent cases:

Alejandro “Alex” Nieto: In March 2014, the 27-year-old was eating a burrito in Bernal Heights Park when officers confronted him after receiving reports of a man with a gun who acted erratically. Gascon said Nieto pointed a Taser gun at officers and refused to comply with their orders to show his hands. Multiple officers shot Nieto, killing him. Gascon declined to bring charges against the four officers involved. In a lawsuit brought by Nieto’s family, a federal civil jury found in favor of the officers.

Amilcar Perez-Lopez: In February 2015, the 20-year-old Guatemalan immigrant was shot and killed in a confrontation with two SFPD officers in the city’s Mission District. Police Chief Suhr told reporters at a press conference that Perez-Lopez had lunged at officers with a knife before he was shot. Witnesses later told the Guardian that police had tried to grab Perez-Lopez from behind, and that after he struggled free and ran, they shot him in the back. An autopsy concluded Perez-Lopez had indeed been shot six times from behind.

Mario Woods: In December 2015, multiple SFPD officers unleashed a hail of bullets on the 26-year-old Woods, who was a suspect in a stabbing case. Police had claimed Woods threatened officers with a large kitchen knife, but a video released by the Woods family’s attorney raised doubts about that account. The footage, released on the same day the family filed a federal civil rights lawsuit against the San Francisco police department, shows Woods pacing alongside a wall with his arms to his side before he was shot 20 times. Numerous shots struck him from behind, according to an autopsy report released in February. Police said Woods refused to comply with officers’ orders. At the time of his death, Woods had methamphetamine, marijuana, cough medicine, antidepressants, caffeine, and nicotine in his system, according to the autopsy report. The city’s attorney argued the cops had acted lawfully. The case is under investigation and prompted a federal probe of SFPD’s use-of-force policies.

Luis Gongora: On April 7, San Francisco police responded to a report of a man waving a large knife at a homeless encampment. Within 30 seconds of leaving their patrol vehicles, officers shouted, “Get on the ground!” and “put that down,” according to surveillance footage obtained by the San Francisco Chronicle. The officers then fired four beanbags and seven bullets at the 45-year-old Gongora. He was rushed to a nearby hospital, where he died. Officials told reporters at a news conference that Gongora had lunged at officers with a knife, though witnesses at the scene disputed that, according to the Chronicle.

Earlier on Tuesday, Mayor Lee told reporters at a press conference that he respected the demonstrators’ right to protest, and that he stood by his police chief. Suhr said he had no plans to resign.

By Tuesday evening, the group on hunger strike was joined by a much larger crowd: Roughly 200 people packed on the street outside the Mission Police Station, trying to get into the monthly community meeting inside in which residents can raise issues with Captain Daniel Parea, who oversees the station.

As Parea began to speak, Lindo stood up and called for the meeting to be held outside, to accommodate the crowd. Parea refused, and people inside started chanting, “Fire Greg Suhr!” Parea declared the meeting canceled and walked out.

Outside, the crowd circled several of the core demonstrators. Gutierrez offered some quiet pleas for justice. Selassie led chants of the names of Nieto, Woods, and others who were killed. Lindo said that if he were to be elected supervisor, any police misconduct that results in a settlement by the city would come out of the police department’s retirement fund. (Most such settlements ultimately fall on taxpayers.) “When they are not held accountable, you do things with impunity,” Lindo said.

Now the block was cordoned off by police. A crowd of demonstrators spilled into the middle of the intersection at 17th and Valencia. Patrol cars and groups of officers stood at the ready nearby, although the situation remained peaceful.

“The police are going to be here regardless,” Sato said. “It’s systemic police problems that have to stop, and we have to do what we can to prevent it.”