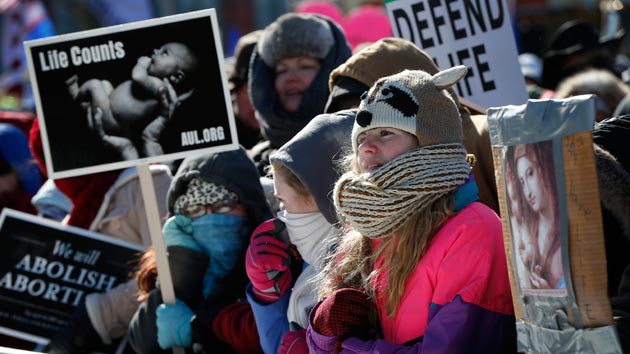 Update (5/19/2016): The Oklahoma Legislature passed SB 1522 on Thursday 33-12, with no floor debate. The bill now goes to the desk of state Gov. Mary Fallin. It is unclear if she will sign the bill, though in the past she has supported anti-abortion legislation.

In the most draconian statewide anti-abortion measure yet, the Oklahoma state House of Representatives approved a state Senate bill last week that could make nearly all abortions in the state illegal and jail doctors who provide the procedure.

The measure, SB 1522, would make it a felony to perform an abortion, with no exceptions for a woman’s health. The minimum punishment for those who do so would be one year in prison. If it is discovered that they have provided an abortion, doctors would be stripped of their state medical licenses. The only exception to these rules would be abortions to save the life of the mother, and the bill makes clear that the threat of suicide by a woman seeking an abortion doesn’t fulfill the “life” requirement. This version of the bill must now get final Senate approval before heading to Gov. Mary Fallin. It’s unclear if she will sign it, though historically she has supported anti-abortion legislation.*

The bill also propagates a medically inaccurate definition of abortion. For example, according to SB 1522 the routine removal of fetal matter after a miscarriage is considered abortion. So is the surgical removal of an ectopic pregnancy, in which the implantation of the fertilized egg is outside the uterus, usually in a fallopian tube, which means such pregnancies are never viable. Leaving the embryo in place could lead to the rupturing of the tube and serious injury to the mother.

“This is a ban on abortion, plain and simple,” said Dawn Laguens, executive vice president of Planned Parenthood Federation of America, in an emailed statement. “Punishing doctors for performing a legal, medical procedure is an assault on women. As a health care provider, we have seen the very real and very disastrous impact these bills have on women’s lives. Women are forced to drive hundreds of miles, and across state lines. Americans overwhelmingly disapprove of this extreme agenda, and Oklahomans will not stand for this.”

During several hours of floor debate on the bill last week, other lawmakers asked bill co-sponsor Rep. David Brumbaugh to explain how the state would handle a costly legal battle over this bill, since its near total ban on abortion goes against Roe v. Wade—the landmark Supreme Court case that legalized abortion—and would very likely lead to court challenges. Brumbaugh responded, “Do we make laws because they’re moral and right, or do we make them based on what an unelected judicial occupant might question or want to overturn?”

Correction: An earlier version of this article did not mention the bill’s return to the Senate.