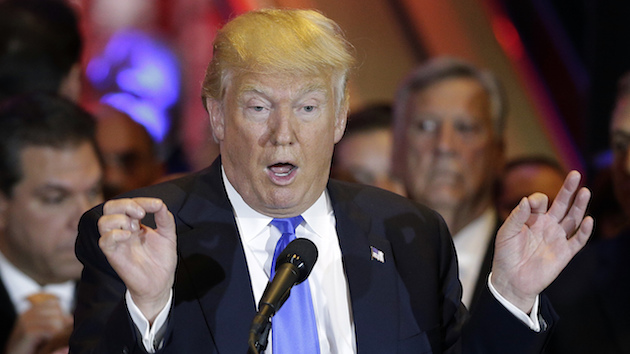 Is the Donald Trump who supports torture and wants the United States to “bomb the shit out of ISIS” a thing of the past? The Republican front-runner certainly wants us to think so.

Trump gave a sedate but completely incoherent speech on foreign policy in Washington, DC, on Wednesday, hoping to burnish his image as the GOP’s self-declared “presumptive nominee” and to put his inflammatory foreign policy statements behind him. As he did during his last major foreign policy speech before the American Israel Public Affairs Committee, Trump read from a teleprompter and seemingly tried to give off a calm, statesmanlike appearance.

At the start of the speech, Trump promised he would lay out a foreign policy “that replaces randomness with purpose, ideology with strategy, and chaos with peace.” But there is simply no point in trying to pick out a Trump Doctrine or any sort of policy vision from Wednesday’s speech. The address was a baffling combination of establishment GOP foreign policy talking points, attacks pulled from Trump’s rallies and media appearances, red-meat jabs at President Barack Obama and Hillary Clinton, and even an “America First” slogan once used by 1940s Nazi sympathizers to try and keep the United States out of World War II.

So, instead of trying to pick through the mess, here’s a list, in no way comprehensive, of the many times Trump contradicted himself while laying out his alleged foreign policy:

The foreign policy establishment has already reacted with almost universal horror to Trump’s rise. A group of more than 75 Republican foreign policy experts blasted Trump in an open letter last month, saying he was “fundamentally dishonest” and “utterly unfitted” to be president. CIA Director John Brennan said he would refuse any orders to resume waterboarding or other acts of torture, which Trump has said he would bring back. Marine Gen. Joe Dunford, the chairman of the Joint Chiefs, attacked torture as “inconsistent with the values of our nation” in response to Trump’s comments. The Huffington Post this week described panic among current and former military officers at the prospect of a Trump presidency. Wednesday’s speech likely won’t do anything to change minds.