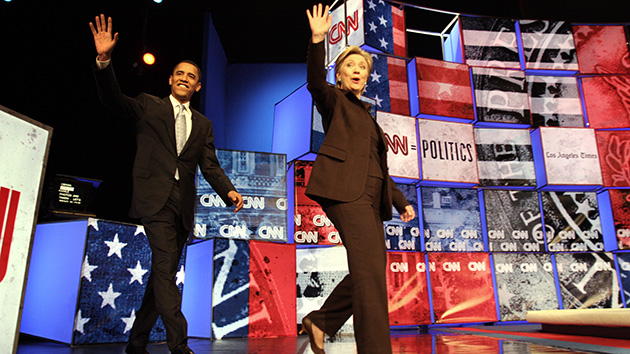 Hillary Clinton’s lead in delegates over rival Bernie Sanders is now almost insurmountable as they move toward the conclusion of the Democratic presidential primary contest. But Clinton has not called on him to drop out of the race, for one simple reason: the example her own campaign set in 2008.

Eight years ago this month, Clinton was trailing hopelessly behind then-Sen. Barack Obama for the Democratic presidential nomination. On May 1, 2008, Clinton loaned her bankrupt campaign $1 million (following at least $10 million in earlier loans). Before the end of that week, pundits were calling the contest for Obama, whose May 6 win in the North Carolina primary, by 14 points, had made his delegate lead essentially insurmountable. “We now know who the Democratic nominee will be,” Tim Russert said on MSNBC after the results came in. Less than a week later, Obama surpassed Clinton in the superdelegate count, signaling that the party establishment was shifting behind the presumptive nominee.

But Clinton was determined to fight until the last votes had been cast. She would go on to win contests in West Virginia, Kentucky, and South Dakota before the primary ended on June 3, even though there was no way for her to make up her deficit in the delegate count.

Along the way, the Clinton campaign put forward every conceivable argument to justify staying in the race. It used wins in states like Pennsylvania, Indiana, and Kentucky to claim that Obama was losing support among white working-class voters and that she would be the stronger general election candidate. On May 5, it began to argue about the delegate math, making the case that the number of delegates needed to clinch the nomination was actually 2,209, not 2,025, the figure that had been cited up until then—and that if neither campaign reached that new number, Clinton was prepared for a floor fight at the party’s convention. On May 23, Clinton justified her continued White House bid by noting that in 1968, Democratic presidential hopeful Robert Kennedy was assassinated in June, after winning the California primary. And lurking in the background in these final weeks was the rumor that Republican operatives had gotten hold of a tape of Michelle Obama disparaging “whitey.”

Eight years later, Clinton knows she cannot turn around and tell Sanders it’s time to leave the race, even though her current lead over Sanders, at about 300 delegates, is larger than the nearly 160-delegate lead Obama had over her after the North Carolina primary in 2008. The Sanders campaign had $17 million on hand as of the latest public filings at the end of March, giving it far more fighting power than the broke Clinton effort had at the same point in 2008.

So the Clinton team has been careful not to say Sanders should drop out. After her victory in New York, Clinton’s communications director, Jennifer Palmieri, told reporters that the campaign expected Clinton to be the nominee but that Sanders had a right to continue to fight. Instead of focusing on Clinton’s refusal to bow out in 2008, her campaign is talking up her unequivocal support of Obama after the primary was over—suggesting that that is the example Sanders should follow. In late May 2008, she said she and Obama “do see eye-to-eye when it comes to uniting our party to elect a Democratic president in the fall.” And when she announced her withdrawal from the race on June 7, she forcefully threw her support behind Obama and urged her fans to do the same.

“I think she set a gold standard for how people who don’t end up with the nomination, who lose in that effort, should come together and help the party,” Palmieri said on the night of the New York primary last month.

What Clinton isn’t mentioning is that before she tried to unify the party, she was questioning Obama’s appeal to white voters, hoping that a bombshell video would surface and help take down her rival, and entertaining a convention floor fight. Despite her team’s claims of magnanimity, at this point eight years ago, Clinton was five weeks and a few attacks shy of giving into the inevitable and uniting the party.