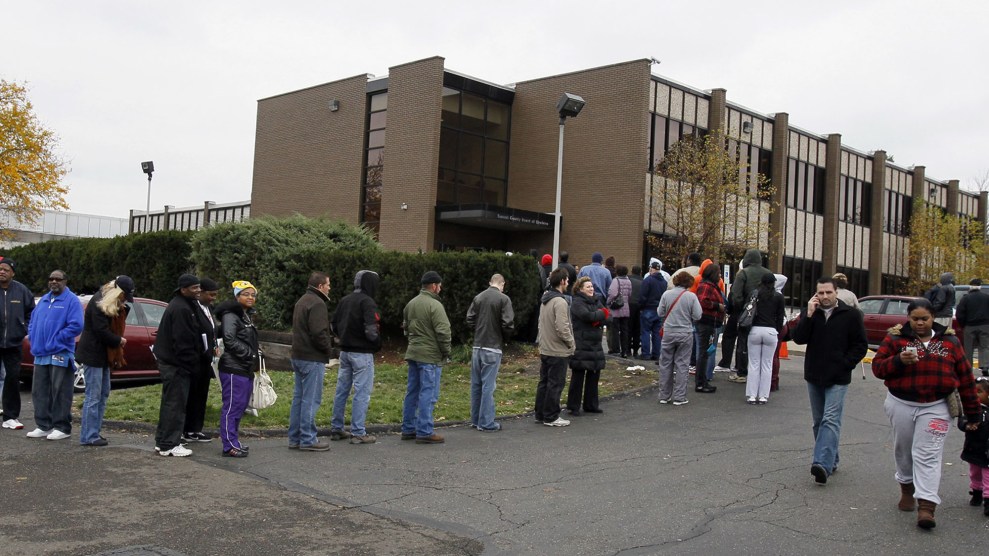 An Ohio judge ruled Tuesday that Republican efforts to curtail the state’s so-called “Golden Week”—a week that included the ability to register and vote at the same location—violated the Constitution and federal voting laws.

In the 120-page opinion, Judge Michael H. Watson, a Republican, ruled that the elimination of Golden Week in Ohio “imposes a modest, as well as a disproportionate, burden on African Americans’ right to vote.” If the ruling stands, Ohio voters will be able to vote 35 days before the general election in November, according to the Columbus Dispatch.

“We are thrilled with the results,” Marc Elias, the lead lawyer in the case (and also the Hillary Clinton campaign’s top lawyer), told Mother Jones on Tuesday. “The restoration of Golden Week is a win for Ohio voters and all [who] support voting rights. It’s a shame that Republican officials continue to fight against increased access to the polls, making lawsuits like this necessary.”

Tuesday’s ruling marks the second time a federal judge has struck down key portions of the 2014 law. State Republicans pushed and passed the bill in 2014 to reduce costs on election administrators and ease concerns that voter eligibility couldn’t be confirmed with registration and voting happening at the same time. The ACLU challenged the law in 2014, and a judge sided with the ACLU and ordered the local election officials to set uniform early voting hours, but Golden Week wasn’t reinstated.

In his ruling, Watson determined that the elimination of Golden Week violated the 14th Amendment, which guarantees equal rights under the law, and Section 2 of the Voting Rights Act, which prohibits voting practices or procedures that discriminate on the basis of race, color, or language.

“The court finds that [the law] results in less opportunity for African Americans to participate in the political process than other voters,” Watson wrote.

Watson rejected other claims in the suit. One objected to the law’s stipulation that there be only one early voting requirement per county; another stated that Republicans enacted the laws specifically to place a burden on African American voters.

The state says it plans to appeal Tuesday’s ruling.

Rick Hasen, an election law expert at the University of California-Irvine School of Law, wrote Tuesday that Watson’s Appeals Court ruling is likely to stand, given the US Supreme Court’s “potentially likely” 4-4 split, with the late Justice Antonin Scalia’s seat still unfilled.

Read the full order below: