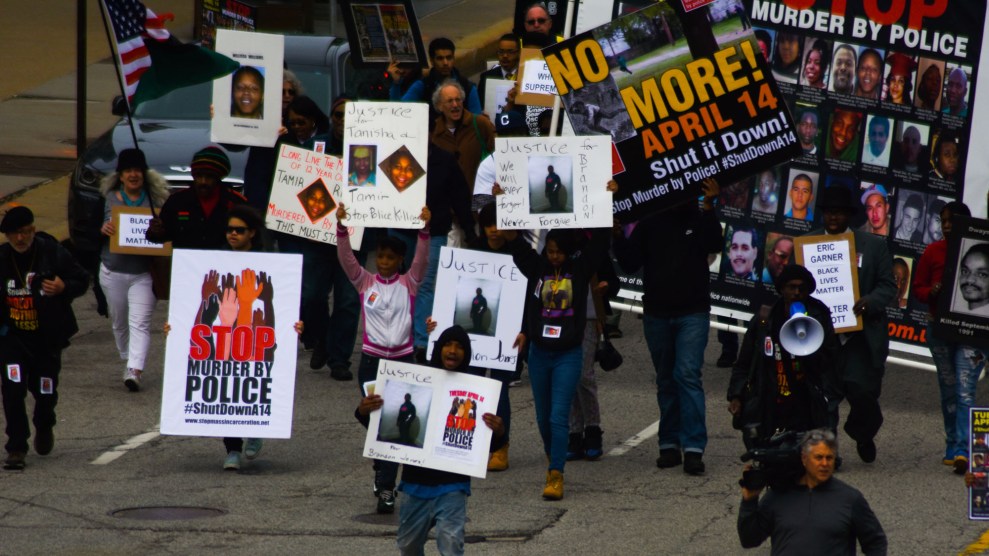 With the Republican National Convention fast approaching in Cleveland, tensions over security are mounting. Presumptive GOP nominee Donald Trump is expected to draw thousands of protesters and the scene outside the convention could turn volatile. At least two outside police departments have pulled out of the security effort, citing concerns that the city is ill-prepared. And the American Civil Liberties Union sued Cleveland over protest rules it views as draconian. (A settlement was reached last week.) Now, local and federal authorities have begun aggressively tracking activists—including members of the Black Lives Matter movement who have helped spotlight Cleveland’s brutal policing problems.

Last week, law enforcement agents began visiting the homes of known activists in Cleveland. Jocelyn Rosnick, an attorney with the Ohio chapter of the National Lawyers Guild, which is providing legal advice and holding civil rights trainings for activists ahead of the RNC, said her group had received about two dozen reports from activists who said they’d been visited by agents from the FBI, the Department of Homeland Security, and the Secret Service, or by Cleveland PD officers and Cuyahoga County sheriff’s deputies. Law enforcement agents, some of them said, also made phone calls to relatives, neighbors, and places of employment asking about the activists’ whereabouts. According to Rosnick, most of these reports have come from people involved with the local chapter of Black Lives Matter or the Occupy Wall Street movement.

The people receiving these visits and calls have found them intimidating. Local resident Dionne Hudson told Cleveland’s NewsChannel 5 that two law enforcement officials visited her home on June 21 looking for her 20-year-old daughter, who was among 71 people arrested at a protest following the acquittal of Cleveland PD officer Michael Brelo for a fatal shooting. Her daughter’s case was thrown out and she has not been involved in a protest since, Hudson said. “Where can we find her at? They asked things of that nature. What’s her phone number. It was like they were hunting her down,” Hudson said. “It’s intimidating.”

“It made me feel uneasy,” one activist said of the FBI visit, “like no one I knew was necessarily safe.”

A prominent Cleveland activist, contacted by Mother Jones via the National Lawyers Guild, said an agent with the FBI’s Cleveland field office left him a voicemail last Tuesday asking to speak with him. The activist, who asked to remain anonymous, said he had heard from others who received visits or phone calls from law enforcement. One said officers stopped him while he was jogging, and another said officers blocked his car with theirs as he attempted to pull out of his driveway. The activist, who has done organizing in Cleveland for nearly two decades, said he was not intimidated, but he worries about the impact on younger, less experienced activists.

“Clearly this is a harassment campaign,” he said. He pointed to the FBI’s history of targeting activists, including a local 2012 case in which five Occupy activists were arrested on terrorism charges after a federal agent infiltrated their group. The Cleveland PD, meanwhile has said it planned to use undercover officers in its security preparations. The activist said he thinks law enforcement is using the convention as a pretext to harass people who may end up on their radar for other reasons.

In a statement to the Cleveland Plain Dealer, a FBI spokeswoman said agents were conducting community outreach as a part of their security planning for the convention. “Law enforcement is reaching out to individuals known to the community who might have information that could help to ensure a safe and secure environment during the RNC,” the FBI spokeswoman said. Neither the FBI’s field office nor the Cleveland mayor’s office, which is handling media requests related to the RNC, responded to inquiries from Mother Jones.

Since 2014, Cleveland has seen a wave of protests in response to police shootings of black people. Activists affiliated with Black Lives Matter have also disrupted several political events since the beginning of the campaign season. One BLM leader said in an interview last July that the group would take “any opportunity we have to shut down the GOP convention.” But Rosnick noted that many of the people who had been contacted by law enforcement recently said they had no plans to protest at the convention.

Law enforcement also conducted these kinds of operations ahead of national political conventions in 2008 and 2012, Rosnick said, but “to me it seems like they have cast a wider net this time around.” She said members of an arts collective on the city’s west side—which hosted meetings related to protests of the Tamir Rice case—have also been paid visits. And Maggie Rice, an organizer with Food Not Bombs, told Mother Jones that at least four of her group’s members were visited by FBI agents and plainclothes Cleveland police last week. “It made me feel uneasy,” one of those members told Mother Jones, “like no one I knew was necessarily safe.”

Mother Jones also contacted four Trump supporters who applied for parade permits during the RNC. All replied that they had not been contacted by law enforcement.

Randy Cunningham, a 66-year-old veteran environmental activist who’s coordinating an anti-poverty march for the GOP convention, described how two Cleveland PD detectives visited his home on June 20: One carried a manila folder with his name on it that contained a picture of his driver’s license and other documents, Cunningham said. He said they asked him questions about his plans for the march, how many people were expected to attend, and if he knew of people who might be coming from out of town to cause mayhem.

Meanwhile, Mother Jones also contacted four supporters of Trump in the Cleveland area who submitted applications for parade permits during the RNC. All replied they had not been contacted by law enforcement. Bill Daher, who put in an application for a group called Bikers for Trump, said a police sergeant told him (in a conversation unrelated to his permit application) that because his group was “local” he would likely get a “preferential spot” for his demonstration. Ralph King, who put in an application for Citizens for Trump, wrote in a text message: “Since the pro-Trump supporters have not caused any of the recent violence and only the left-wing protesters have, maybe that is why they are being visited.”

Lee Rowland, an attorney with the ACLU, said there could be legitimate reasons for law enforcement to visit known activists ahead of a large event like the RNC. Collecting information is one, and sharing information with the community about logistics and protest rules is another. “The devil really is in the details of those conversations and how reasonable it would be for a person to feel that the visit was made for the purpose of chilling their rights,” she said. But “there’s no question that when a government agent shows up at your door and says, ‘Hi, we’re here because you protested before and we think you might protest again,’ I think there is a strong implication that that is a coercive visit.”

Rowland said the targeting of Black Lives Matter activists could amount to racial profiling. She expressed particular concern about a case like that of Dionne Hudson’s daughter—a single protest-related arrest of a teenager by local police that had spurred a visit from federal agents a year later. “That’s unbelievably troubling, where someone was engaged in protest activity and arrested but not convicted, which indicates that that was a person who might have been unconstitutionally prohibited from protesting the first time around. So the idea that the government would double down and come around to that person’s house and engage in any conversation that suggested that the person’s right to protest was not fully protected is an absolute affront to the First Amendment.”

Cunningam, the longtime environmental activist, said encounters with law enforcement come with the territory. “You’re going to run into the police or the FBI or some corporate security people or some unusual people showing up at your meetings,” Cunningham said. “It’s just one of the risks you take as an activist.”