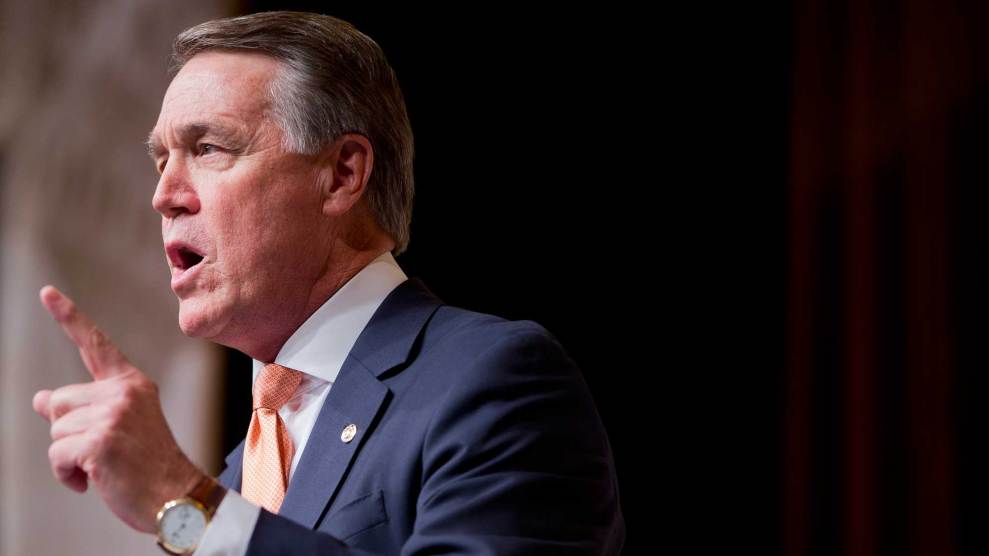 When Sen. David Perdue (R-Ga.) took the stage on Friday morning at Ralph Reed’s Faith and Freedom summit, the first-term senator complained that he had to follow a preacher. But he had a biblical reference ready to warm up the crowd. Yet his line was rather chilling.

Perdue, who was a wealthy businessman before he took office, urged the audience to pray for President Barack Obama—but he clearly did not mean to wish him well.

“We should pray like Psalm 109:8 says: ‘Let his days be few,'” Perdue said with a chuckle. The crowd giggled, but the psalm he cited wasn’t talking about the end of a presidential term and it doesn’t end there.

For some context, the psalm continues:

May his days be few; may another take his office!

May his children be fatherless and his wife a widow!

May his children wander about and beg, seeking food far from the ruins they inhabit!

May the creditor seize all that he has; may strangers plunder the fruits of his toil!

Let there be none to extend kindness to him, nor any to pity his fatherless children!

May his posterity be cut off; may his name be blotted out in the second generation!

May the iniquity of his fathers be remembered before the Lord, and let not the sin of his mother be blotted out!

Let them be before the Lord continually, that he may cut off the memory of them from the earth!

This was not an original thought that Perdue had. The verse has become a popular anti-Obama slogan in some right-wing circles. It has even been printed on bumper stickers. And it has been controversial. As a sitting senator, Perdue may be the highest ranking public official to direct this vengeful verse against Obama.

Update: Perdue’s office emailed Bloomberg and denied that he intended any harm to the president. Despite asking the audience to pray very specifically on the psalm verse he was quoting, Perdue claimed the media was taking it out of context.

David Perdue spokeswoman Caroline Vanvick responds in an email: “He in no way wishes harm towards our president” pic.twitter.com/PPj5jtZv0n