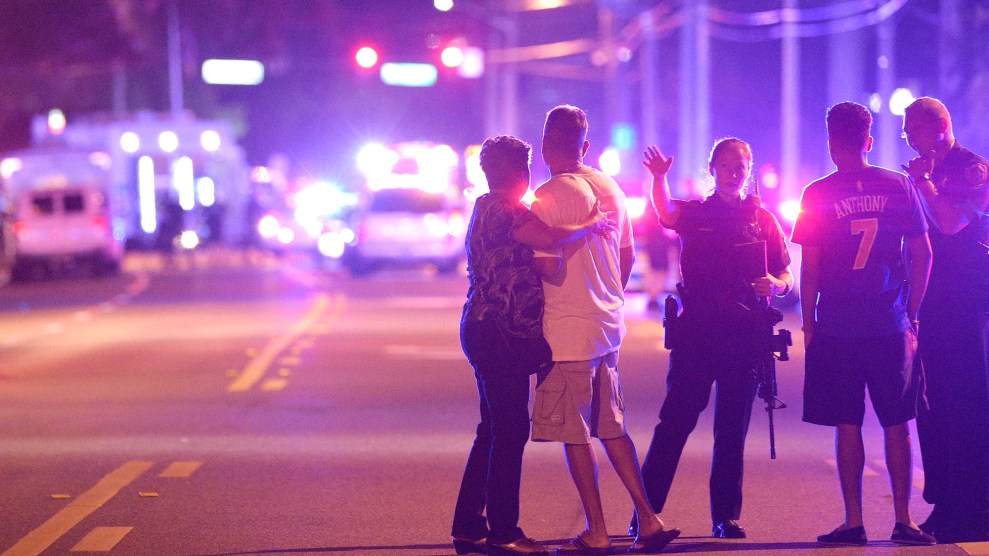 The massacre in Orlando stands as a grim case in many respects, not least the hateful targeting of the LGBT crowd at the Pulse nightclub, and the highest death toll from a mass shooting in modern US history. Equally dark is that the case builds on some disturbing trends related to the means and motives now seen in mass shootings. One is that the attacker struck with an assault rifle and high-capacity magazines—marking the sixth of nine mass shootings in just the past year alone to be carried out with firearms tantamount to weapons of war.

The other disturbing trend lies with how the perpetrator, Omar Mateen, used digital media. He searched online for inspiration from recent attackers before he struck. And then, as he was unleashing carnage inside the club, he sought to learn if the media was covering the killing in real time.

The attacker reportedly searched online for ‘Pulse Orlando’ and ‘Shooting’ during the prolonged siege of the club.

According to Sen. Ron Johnson of Wisconsin, head of the Senate Committee on Homeland Security, Mateen “used Facebook before and during the attack to search for and post terrorism-related content.” Johnson detailed authorities’ knowledge of Mateen’s online activity in a letter sent Wednesday to Facebook CEO Mark Zuckerberg, in which Johnson called for the company to hand over data connected to the attacker.

As Mateen shot scores of people and held others hostage, according to Johnson’s letter, he searched online for ‘Pulse Orlando’ and ‘Shooting’ during the prolonged siege of the club. (Presumably he did so on a smartphone, though that isn’t detailed in the letter.) Meanwhile, just weeks before the massacre, Mateen researched the couple who pledged allegiance to the Islamic State and committed the massacre in San Bernardino last Decemeber, suggesting that he may have wanted to follow in their footsteps.

These behaviors underscore a growing concern among leaders in the field of threat assessment that digital technology has compounded the danger of future attacks. As I reported in a Mother Jones cover story last fall, there is emerging forensic evidence showing that social media has both exacerbated a copycat effect and become a prime tool for mass shooters seeking infamy.

Last August in Virginia, an enraged ex-television reporter carried out what was dubbed “the first social media murder”: He gunned down two of his former colleagues on live television while filming it with a camera of his own. He then posted the footage on Twitter and Facebook as he fled, shortly before dying in a police pursuit.

Less than 48 hours after the massacre in Orlando last Sunday, a 25-year-old man in France stabbed an off-duty police officer and his female companion to death, and then proceeded to film himself live on Facebook from inside the couple’s home. He declared his allegiance to the Islamic State and pondered what he might do with their terrified 3-year-old son, who was in the background. (The boy apparently remained physically unharmed after police raided the home and killed the attacker soon thereafter.)

“This is so much what we thought would happen, this increasing use of social media,” says Reid Meloy, a forensic psychologist and threat assessment expert who consults for the FBI and foreign security agencies. “I think we’re going to see more of this movement toward real-time broadcasting of these events, or individuals looking for the level of coverage of the events in real time.” Digital media offers a big platform for attackers to feed their pathological narcissism, he explains, “fulfilling their desire to be seen and to gain notoriety.”

Orlando epitomizes just how difficult it can be to untangle motive in a mass shooting, especially with so-called lone wolves (a term Meloy and others suggest is unhelpful to mitigating the copycat problem.) Was it a terrorist attack? A hate crime? The act of a disturbed person secretly struggling with his sexual identity? Quite possibly it was all of the above—and we may never really know, as security expert and author Peter Bergen wrote this week.

“If they pledge to ISIS, in their minds it burnishes their reputations even more because they become a part of a larger and much more frightening movement.”

Many mass shooters display behaviors that fall along a spectrum of the criminal, clinical, and ideological, explains Meloy. Investigators are still piecing together a picture of Mateen’s background and his pathway to the Pulse nightclub. But while the term “terrorism” obviously applies to the massacre, Mateen’s stated allegiance to a violent extremist group—he’d also boasted about Al Qaeda and Hezbollah in the past—may have been more related to the clinical than the ideological.

Becoming a “school shooter” has long been a kind of apex for disturbed young men who gravitate toward going on a gun rampage. Many cases—attacks carried out as well as others averted—have included evidence of the perpetrators aspiring to “do a Columbine.” Now, we may be facing an even more grandiose and chilling phenomenon. “If they pledge to ISIS, in their minds it burnishes their reputations even more because they become a part of a larger and much more frightening movement,” says Meloy. “They also garner much more attention as soon as they pledge allegiance, whether during the fact or just before it.”

The ability of ISIS to exploit deep-seated grievance, rage, and self-loathing in potential recruits has been well documented. Though there still may be much that we don’t know about the Orlando and San Bernardino attackers, there are some astonishing parallels in the two young men: a history marked by personal rage and domestic violence, the abandonment of a young child to go on a suicidal mass-murder mission, and their taking up the ISIS banner shortly before striking.

With the San Bernardino massacre, the perpetrators’ abandonment of their baby struck many as the most incomprehensible detail. In Orlando, observes Meloy, it may well have become a new point of identification for a copycat. “You’ve got a young man who was willing to sacrifice his life and his role as a father—probably for a variety of disturbed reasons, possibly including self-loathing as a homosexual—to satisfy the hatreds and to seek the glory that he’s somehow searching for online, before and while the attack is occurring.”

“I’m truthfully far more interested in the posts from before,” Sen. Johnson said on NPR’s Morning Edition, “to see if there’s anything possible we could’ve learned to prevent this attack, as opposed to what a sick person, a deranged person was actually doing [online] while he was slaughtering our fellow citizens.”

Beyond the toxic brew of motive and any further details that may emerge about the attack planning, the whole world is now very familiar with Mateen’s selfies—including the next potential mass shooter. For threat assessment professionals, all of it is troubling new evidence as they continue to focus on stopping the next one.