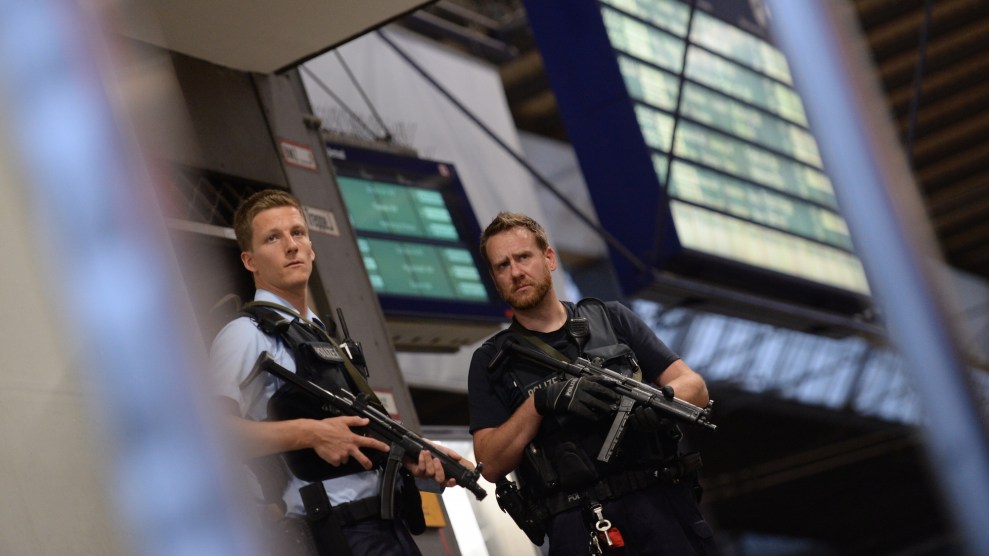 Update July 22, 9:11 p.m. ET: The gunman has been identified as an 18-year-old German of Iranian descent, the Munich police chief, Hubertus Andrä, said in a press conference. He was found dead on a side street near the crime scene. The police chief said the shooter, who used a handgun, had been living in Munich for more than two years and was not known to law enforcement agencies. Police said they did not know of any links to terrorist organizations and that the motive remains unclear. According to Andrä, police initially pursued eyewitness reports of additional shooters, but concluded the gunman acted alone. “Yesterday was without a doubt the most serious and most difficult day of my career,” he said.

Update July 22, 7:36 p.m. ET: Munich police tweeted that they now believe the shooter acted alone and committed suicide. Reuters reported earlier that at least 10 people have been killed in the shooting.

We found a man, who killed him himself.
We assume, that he was the only shooter. #gunfire #munich

Update July 22, 6:11 p.m. ET: Police are investigating a ninth body they believe may belong to an attacker who shot himself. There were earlier unconfirmed reports that one of the gunmen had committed suicide. Bayrischer Rundfunk also reported that around 20 people were injured in the shootings. Public transport remains closed, but witnesses say some cars and pedestrians have returned to the streets in Munich despite police asking residents to stay indoors as the manhunt for suspects continues.

Update July 22, 3:45 p.m. ET: Munich Police confirmed at a press conference that at least six people have been killed in the attack, with an unknown number of people also injured. They said there is no information that the attackers were radicalized Muslims, but that no motivations are being ruled out so far.

Update July 22, 3:09 p.m. ET: A police spokesman in Munich told reporters that the police are now assuming there were three shooters in the attack, all of whom are still at large. Train service into Munich has been shut down in addition to the local public transport, and police have told drivers on their way to Munich to leave the highways.

Police in Munich confirmed that multiple people were killed during a shooting attack at the city’s Olympic shopping center on Friday.

In a statement, police said multiple deaths and injuries occurred during the shooting but did not offer specific numbers. Bavarian Interior Minister Joachim Herrmann told German television station NTV that three people were killed, while Bavarian radio station Bayerischer Rundfunk says there are at least six dead. Neither number has been confirmed by police.

Media outlets have reported that there was potentially more than one shooter, but police have said they don’t yet know how many people took part in the attack. A Facebook post by the Munich police said eyewitnesses reported three different men with guns at the scene, but that the number was not yet confirmed. The perpetrator or perpetrators are still at large, and police have ordered people in the area around the mall to get off the streets and return to their homes. Munich has also shut down all local public transportation, according to Bayerischer Rundfunk, and streets in the city’s central shopping districts have reportedly closed with shoppers still inside.

“We’re trying to get the situation under control,” said police spokesman Thomas Baumann to DPA, the German wire service. “We don’t have any knowledge about where the shooters are keeping themselves.”

It’s not yet known who the shooter or shooters were and what motivated the attack. Police are now calling the incident an “acute terror situation” but say they still have no background information on the attack and its perpetrators.

A video allegedly showing the attack was posted on Twitter on Friday. The clip shows a man pulling out a handgun and firing at people outside a McDonald’s. No one in the video is seen being hit by bullets or otherwise injured before the cameraman begins running away from the area. A police statement issued on Friday confirmed that the attack had begun at a McDonald’s.

Local reporter Richard Gutjahr described the scene at the shopping center as something “out of a bad movie,” with the shopping center completely surrounded by police, a helicopter overhead, and police carrying semi-automatic rifles. Gutjahr was not able to confirm reports of deaths or injuries.