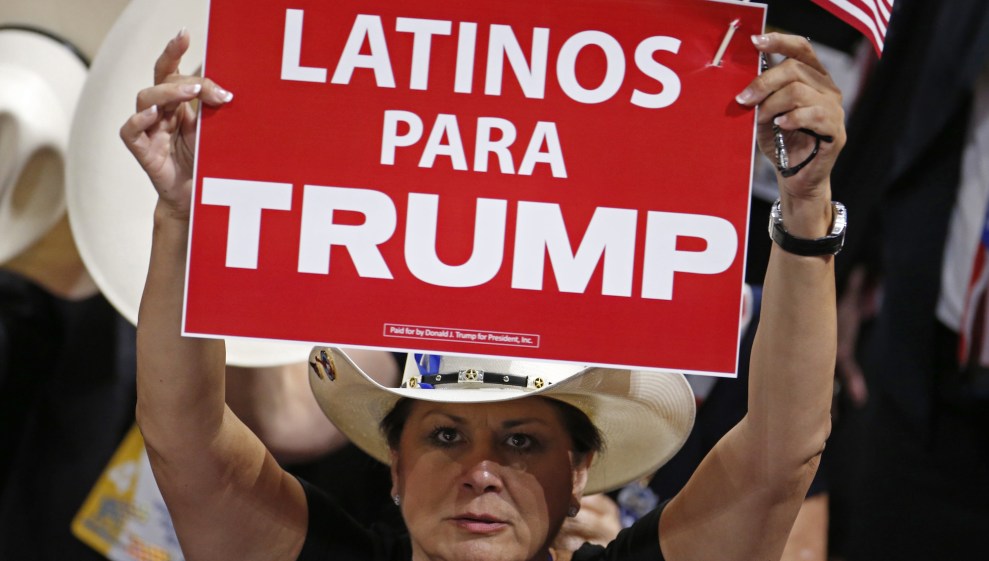 With less than 100 days to go until the election, the Donald Trump campaign will officially launch its outreach effort to black voters on Sunday at a church in Charlotte, North Carolina. For some of the prominent Trump backers taking part in the event, it’s the culmination of a monthslong fight to keep minority support for the Republican candidate from crumbling altogether amid a seemingly endless series of scandals that have prompted charges of racism.

The National Diversity Coalition for Trump, a group originally conceived after a contentious meeting between Trump and black ministers last year, began operations in April. The coalition, a volunteer effort that is not formally connected to the Trump campaign, is the brainchild of a handful of vocal Trump supporters. Bruce LeVell, a black businessman and Georgia delegate to the Republican National Convention, serves as the organization’s executive director. Michael Cohen, the executive vice president of the Trump Organization, and Darrell Scott, a black Cleveland-area pastor, are also leaders of the group. Omarosa Manigault, a former Apprentice contestant who serves as Trump’s director of black outreach and will deliver a sermon at Sunday’s event, was vice chair of the coalition prior to joining the campaign. The group’s advisory board includes leaders of groups such as American Muslims for Trump, African-American Pastors for Trump, and Korean Americans for Trump.

Despite abysmal poll numbers, members of the coalition contest the perception that Trump is struggling among nonwhite voters. “There are a lot of minorities who are for Trump, but the media doesn’t report that,” Dahlys Hamilton, a coalition adviser and the founder of the conservative group Hispanic Patriots, says in an email. Hamilton is currently helping the group plan its Hispanic outreach strategy.

Coalition members have become some of Trump’s most reliable media surrogates, frequently making appearances on television and radio in an effort to cast the candidate in a better light. It’s not surprising that media bookers turn to them, given the dearth of prominent Trump supporters of color.

The coalition is attempting to reverse a precipitous slide in minority support for the Republican Party. After Mitt Romney’s loss in 2012, party insiders wrote an “autopsy” of the election that called for bringing more nonwhite voters into the party, and Republican National Committee Chairman Reince Priebus announced a $10 million minority outreach initiative the next year to aid in the effort. This year, polls in some states show minority support for Trump far below Romney’s numbers. (An online poll conducted by Florida International University and Adsmovil and released Wednesday found Trump with one-third the support among Latinos in Florida that Romney had.) Earlier this week, Sally Bradshaw, a longtime adviser to Jeb Bush and one of the co-authors of the autopsy, said she would leave the Republican Party rather than support Trump. “Ultimately, I could not abide the hateful rhetoric of Donald Trump and his complete lack of principles and conservative philosophy,” she told CNN.

Even within a party that has struggled to attract voters of color, Trump has seemed to go out of his way to turn off one minority group after another. First, of course, there was his wall to prevent Mexican “rapists” and drug dealers from entering the country. Then came his ban on Muslim travel, his frequent retweeting of white supremacists, skirmishes between black protesters and Trump supporters at rallies, his suggestion that a federal judge was biased because of his Mexican heritage, and, most recently, a feud with the parents of a Muslim American Army captain killed in combat in Iraq.

“There are a lot of minorities who are for Trump, but the media doesn’t report that,” says one adviser to the National Diversity Coalition for Trump.

“There is a deliberate effort by the Clinton campaign to label him as a racist,” says Paris Dennard, a member of the coalition’s advisory board and a black outreach staffer at the White House during George W. Bush’s second term. “Hillary Clinton can only win this election by voter suppression, by stopping Republicans, independents and moderates from voting for Trump.”

Members of the coalition say Trump hasn’t been given a chance to explain how his policies will help minority communities and argue that the candidate’s racially charged rhetoric on the campaign trail does not match his behavior in private meetings. They believe his business experience, his stance on criminal justice reform, his positions against free trade and outsourcing, his call for limiting immigration, and his support of school choice will appeal to conservative nonwhite voters frustrated by the Obama presidency. (Trump’s campaign website does not list a specific justice reform platform, but the candidate has said he wants a return to “law and order,” using misleading interpretations of crime data to argue that “this administration’s rollback of criminal enforcement” has caused an increase in crime.)

Changing the narrative around the Trump campaign hasn’t been an easy task. At times, the coalition has been hindered by its lack of official status in the campaign. According to NBC, when the group held its launch meeting at Trump Tower in April, members spent more time going through security than interacting with Trump. Last month, BuzzFeed reported that Corey Lewandowski, Trump’s campaign manager until June, complicated the diversity coalition’s attempts to guide Trump’s minority outreach strategy when he “made the decision that the campaign would not launch outreach initiatives in favor of a broader message aimed at the entire country.” NBC notes that when the coalition met with Trump in April, Lewandowski was not in attendance.

In July, with Lewandowski gone, several members of the group spoke onstage at the Republican National Convention, and the Trump campaign has reportedly hired several staffers to work on minority outreach efforts. At a press conference last week, Trump told reporters that his campaign would hold a news conference discussing its Hispanic outreach effort sometime “over the next three weeks.” On Sunday, Manigault told NPR that the campaign has created a “76-page strategy” targeting black voters. Manigault did not respond to a request for comment.

But the outreach efforts have come against the backdrop of an exodus of minority staffers from the GOP leadership. The Republican National Committee’s director of Hispanic media relations left the organization in June amid reports that she was “uncomfortable” working with the Trump campaign. In March, the RNC’s director of African American outreach became the fourth black staffer to leave the committee in the past year, although people who know her said she didn’t leave because of Trump.

The Trump campaign has turned down numerous invitations to speak before prominent minority organizations like the NAACP, the National Association of Black and Hispanic Journalists, and the National Urban League. In June, the National Council of La Raza, one of the largest Hispanic civil rights organizations in the country, announced that it would not invite Trump to speak at its annual conference, citing his “indiscriminate vilification of an entire community.” A meeting with Hispanic community leaders in Florida has been rescheduled multiple times in the past month, and an event with Hispanic business leaders in Texas was scrapped entirely.

If recent polls are any indication, the coalition faces an uphill climb as it tries to win over minority voters. A June Washington Post/ABC News poll found that 89 percent of Hispanic voters surveyed viewed Trump negatively, suggesting that despite an ongoing debate over the accuracy of polls measuring Trump’s level of support among Latinos, it is unlikely that he will win more Latinos than the roughly 40 percent George W. Bush managed in 2004 or the 27 percent won by Romney in 2012. Among black voters, things are even worse: Last month, an NBC News/Wall Street Journal/Marist poll showed zero percent support for Trump among African Americans living in Ohio and Pennsylvania, key battleground states this year.

The National Diversity Coalition is unfazed by those numbers. “You can pick a poll and find what you want,” says Dennard. “There are a lot of black people that will not come out and say that they will support Donald Trump, but will pull the lever [for him] in November.”