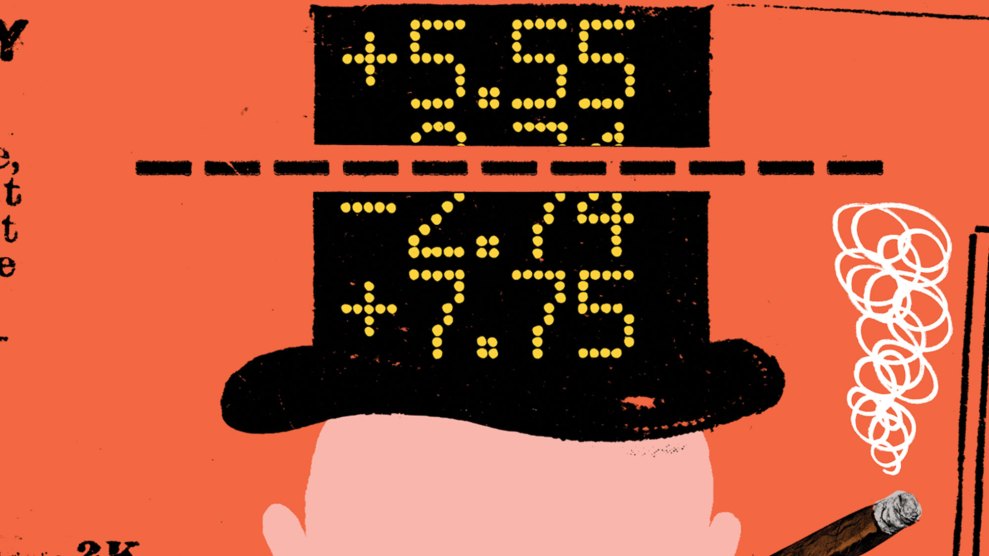 Unless you’re one of the lucky few who live in Delaware, Montana, New Hampshire, or Oregon, you pay a sales tax on almost everything you buy. We’re all so used to the idea that it seems completely natural. And why not? Sales taxes are simple and cheap to collect, they raise a lot of money, and they’re pretty easy on consumers since we end up paying in tiny increments that are generally fairly painless. What’s more, because sales taxes are part of the broad family of consumption taxes, economists say they’re relatively efficient.

But they aren’t perfect. In particular, they hit the poor quite hard. “Sales and excise taxes are the most regressive element in most state and local tax systems,” says the Institute on Taxation and Economic Policy, which examines state tax systems every year. Last year, it claimed Washington had the most unfair tax system in the country, largely because the state, which lacks an income tax, raises nearly half its revenue from sales taxes. According to ITEP, the working poor in Washington pay 12.6 percent of their family income in sales taxes. The top 1 percent pay 1.6 percent. That’s pretty damn regressive.

Adopting Sanders’ position not only would be the right thing for Clinton to do, but could help persuade his army of fans that she’s not the water carrier for Goldman Sachs that so many of them think she is.

Beyond raising badly needed revenue, there’s a potential political benefit too. Both Bernie Sanders and Hillary Clinton endorsed an FTT, but Sanders’ proposal covered a broader array of transactions. Adopting his position not only would be the right thing for Clinton to do, but could help persuade Sanders’ army of fans that she’s not the water carrier for Goldman Sachs that so many of them think she is. That might go a long way toward uniting the Democratic Party in the campaign against Donald Trump this fall.

Do I have your attention yet? The devil, as usual, is in the details, but the details behind an FTT aren’t really very complicated. You just have to decide exactly which financial transactions to tax, and you have to decide how high the tax rate should be. Let’s take a look.

Generally speaking, the biggest components of the financial market are stocks, bonds, and derivatives, so that’s what you want to tax. Stocks and bonds are pretty easy: They have a clear-cut market value and their sales are tracked and reported in a transparent way. What’s more, since their volume of trade is so large, the tax rate can be very, very low. Sanders, for example, has proposed a rate of 0.5 percent for stocks and 0.1 percent for bonds. That’s a tax of only 50 cents on a $100 stock transaction and a dime on a $100 bond sale—and it would be even less than that if we stayed closer to 0.1 percent on stocks, as many progressive economists recommend.

But the benefit of taxing these instruments goes beyond raising revenue. About 18 percent of stock transactions take place in alternative systems, including so-called “dark pools“—where trades are hidden from public view—and a whopping 50 percent are executed by high-frequency robot traders that can make thousands of tiny trades every second. Both are problematic. High-frequency trading is so complex that almost no one truly understands how it works, and small mistakes can produce huge losses within minutes—so-called “flash crashes” that happen too fast for humans to react to before the damage is done. Dark pools were designed in part to evade high-frequency traders, but they have produced an endless stream of conflicts of interest. The good news is that an FTT would probably put high-frequency trading entirely out of business, since each individual trade usually earns a profit smaller than the size of the tax. No matter how sophisticated the computer algorithms get, there’s no point in executing a trade that makes a penny but costs 25 cents in taxes.

Derivatives are a tougher nut, since trading isn’t standardized and the value of a derivative isn’t always easy to figure out. That said, the notional value of derivatives is enormous, which allows an FTT on derivatives to be very, very small: The Sanders plan, for example, taxed derivatives at a minuscule 0.005 percent—about a nickel per thousand dollars.

There’s a case to be made that the tax would make the entire financial system safer.

So how much money can an FTT raise? Economist Dean Baker of the Center for Economic and Policy Research, a longtime FTT advocate, has estimated that it could raise more than $130 billion per year. A recent report from the nonpartisan Tax Policy Center (TPC) based on a different rate suggests that the tax would produce a more modest $75 billion per year; beyond that, the Center’s economists say, and the FTT reduces trading volume so much that no additional revenue is raised.

The TPC report also concludes that an FTT would be very progressive. More than a third of the tax would fall on the top 1 percent, and about three-quarters would fall on the top income quintile. This makes sense, since it’s wealthy investors who do most financial trading. Middle-class workers simply don’t have a lot of financial assets to trade, and the assets they do own tend to be in pension funds or retirement accounts, which don’t tend to engage in high-frequency trading.

So are there any drawbacks to an FTT? Sure. The biggest fear is that it would simply push financial trading to other countries. Wall Street would shrink, but only because other financial markets would grow.

However, this will be a much smaller issue if the European Union fights off objections from the finance industry and implements the FTT it’s been working on for several years. The tax proposal is scheduled to be finalized this summer. Beyond that, various versions of an FTT are in place in Hong Kong, the United Kingdom, Switzerland, South Africa, and other countries.

There are also concerns that an FTT reduces the efficiency of financial markets—and this is certainly true. Virtually all taxes introduce a certain amount of economic inefficiency. But in the case of finance, which is currently so efficient that a routine housing bubble can nearly destroy the global economy, this inefficiency might be a feature, not a bug.

In fact, there’s a case to be made that an FTT would make the entire financial system safer. The 2008 financial crash, for example, was arguably a bad situation made worse by the spectacular growth of complex derivatives, which often depended on leveraging small, speculative investments into big ones. Unfortunately, in the same way that high leverage can amplify profits, it can also amplify losses when these high-leverage bets implode. An FTT wouldn’t eliminate this kind of reckless behavior, but it might make speculative trading less attractive and thereby increase the overall stability of the financial system.

Of course, there are other planks to a comprehensive progressive plan to rein in Wall Street. The carried-interest loophole, which allows hedge fund managers to pay lower tax rates than cab drivers, should be eliminated. Estates bigger than $5 million should be taxed at a higher rate. Synthetic-derivative trading should be banned. And the shadow banking system, which was largely responsible for the 2008 financial crash, should be more tightly regulated.

But an FTT deserves to take center stage too. As Jared Bernstein, a former economic adviser to Vice President Joe Biden, says, “A financial transaction tax is a smart, fair way to raise urgently needed revenues while reducing unnecessary trading that makes our markets more volatile.” What more could a progressive presidential candidate ask for?