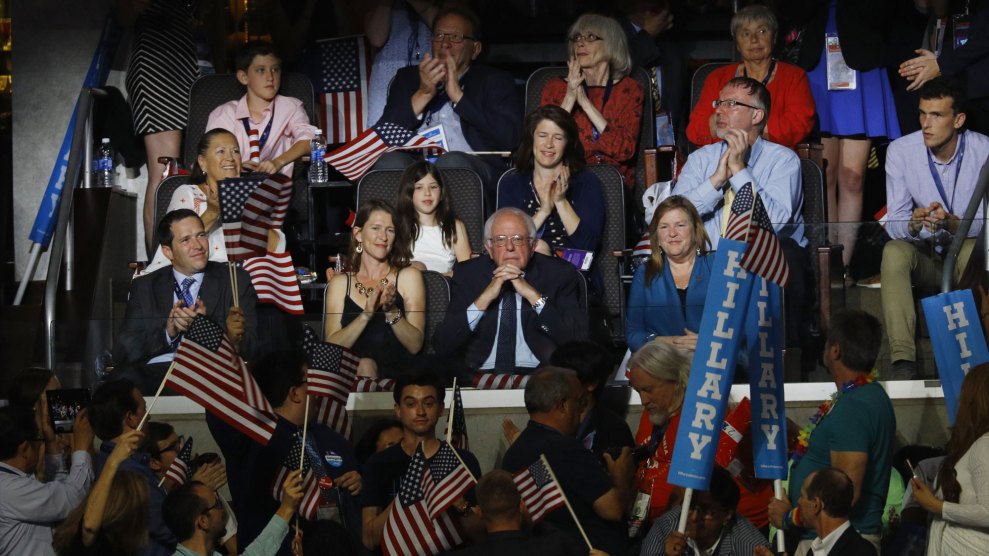 For a few minutes Friday afternoon in New Paltz, New York, it felt like old times for Bernie Sanders. Looking out over a sea of college students in Bernie t-shirts and Bernie buttons and a very uncomfortable looking Bernie onesie, the Vermont senator ran through the issues that had fueled his strong showing upstate during New York’s March primary: fracking, oligarchy, inequality.

But this time, Sanders was on a different mission—to elect Zephyr Teachout to Congress in the state’s 19th district. National Democrats consider the swing district held by the retiring GOP Rep. Chris Gibson one of their most important pickup opportunities, critical to their hopes of retaking the House, and Sanders was effusive in his praise of law professor and campaign finance crusader he has described as a leading light of his “political revolution.” Of the 435 members of the House, he said, Teachout was poised to be “the most outstanding” of the bunch—”a leader at a time when we need leaders.” When the crowd started into one last chant of “Ber-nie!” the senator interrupted, determined to pass the torch. “Thank you,” he said, “but that ‘Ber-NIE‘! has now got to be directed to ‘Ze-PHYR!'”

Sanders has been mostly quiet since the chaotic Democratic National Convention in Philadelphia, when hundreds of his supporters walked out of the arena after he ceded the nomination to former secretary of state Hillary Clinton. But the Vermont independent had pledged to “vigorously” campaign for Clinton and downballot Democrats this fall and launched his own political non-profit to further the goals of his “revolution.” Now, with less than two months to go until election day, Sanders is getting off the bench—and Democrats could really use the help.

After campaigning with Teachout, Sanders boarded a plane to Pittsburgh, where he was set to stump for Katie McGinty, the Democratic nominee for Senate in Pennsylvania. (Joining Sanders in Steel City: Braddock, Pennsylvania, mayor John Fetterman, a Sanders backer who lost to McGinty in the primary.) Then he has a busy weekend of rallies and organizing events planned for Ohio, where he and Sen. Elizabeth Warren (D-Mass.) are crisscrossing the state to campaign for Clinton, hitting the cities and college campuses where Sanders performed best in the March primary. After trailing for months, Trump has led the last three polls in Ohio and now leads in the Real Clear Politics average in the state.

Sanders’ campaign tour comes at a time when a significant portion of his supporters are still unsure who to vote for. According to a New York Times/CBS News poll released on Thursday, 36 percent of voters under the age of 30 are supporting third-party candidates. Ten percent of those voters are backing Green Party nominee Jill Stein, who has made a show of appealing to disaffected Sanders supporters and has earned the backing of a handful of Democratic National Convention delegates. In July, Stein even offered to give Sanders a spot on the Green Party ticket if he would drop out of the Democratic race to join the third-party.

The 44-year-old Teachout, a Fordham University Law School professor and former Howard Dean staffer who has written a book about political corruption, was one of a handful of House candidates who Sanders endorsed during the primaries. Two years ago she ran for governor in the Democratic primary against the incumbent Andrew Cuomo and won 32 of 62 counties despite minimal funding and zero establishment support. Her unlikely success, and her unabashedly progressive platform, foreshadowed Sanders’ long-shot campaign this spring.

Although Clinton should win New York’s electoral votes easily, Teachout’s Hudson Valley district—infused with a Vermont-ish mix of family farmers, college students, and old-school hippies—is emblematic of the kind of place in swing districts and purple states where Sanders’ word carries the most weight. A local string band called Yard Sale, which described itself as “local and organic,” performed on a stage fashioned from a shipping container for the crowd compromised largely of students from the nearby State University of New York at New Paltz. “We’re gonna reach out/ for Teachout/ everybody/ join along,” a band member sang.

Sanders couched his support in personal terms, citing a meeting he and Teachout had attended years ago opposing the North American Free Trade Agreement and calling Teachout’s House race the clearest battle on the map between the “oligarchy” and the progressive left. (Teachout has challenged the billionaire hedge-funder Paul Singer, a backer of her Republican opponent John Faso—a former fracking pipeline lobbyist—to a debate.) When it was Teachout’s turn, she addressed the audience, many of whom were hearing her speak for the first time, in a language that sounded familiar. She railed against the “hedge fund billionaires,” such as Singer, funding a super-PAC in support of her opponent, and asked her supporters if they knew what her average donation was—a staple of Sanders stump speeches. “Nineteen dollars!” came the response.

But there were plenty of reminders of the challenges facing Sanders as he tries to herd his coalition into the Democratic tent. Perhaps wary of resurrecting old wounds (the Vermont senator was jeered when he called for party unity at a delegate meeting in Philly) neither candidate mentioned the name at the top of the Democratic ticket, and Sanders alluded to Trump only in passing.

Safiyyah Alston, a sophomore at SUNY-Ulster with a Three Bernie Moon t-shirt and flowers in her hair, told me she still just wanted to see Sanders on the ballot. “I support him now!” she said. “If he jumped in the race I’d support him.” But she was still trying to get to yes with Clinton. Lorraine Vigoriti, another Bernie backer in a t-shirt that read “#ForeverBernie” with a drawing of a forlorn looking senator walking into the distance, told me it was “Jill or nobody.” Why nobody? She was worried that if she so much as cast a vote it would be “stolen” by Clinton supporters at the polling location and converted into a Hillary vote; better to just stay home.

As organizers took apart the stage and wrangled attendees for volunteering shifts toward Teachout’s goal of 70,000 door-knocks, I found 21-year-old Oscar Salazar in a onesie covered in photos of Bernie’s smiling face. He had driven up from Westchester County, determined to travel “wherever Bernie speaks or wherever the Pokemon take me,” he said. Salazar had backed Sanders during the primary, of course, and was now leaning toward Stein in the general election. “I’m tired of voting for the lesser of two evils,” he said, although this was the first year he’d ever voted. Still, the primary hadn’t soured him on Democrats entirely. He liked what he’d heard from Teachout—now he was planning to phone-bank for her.