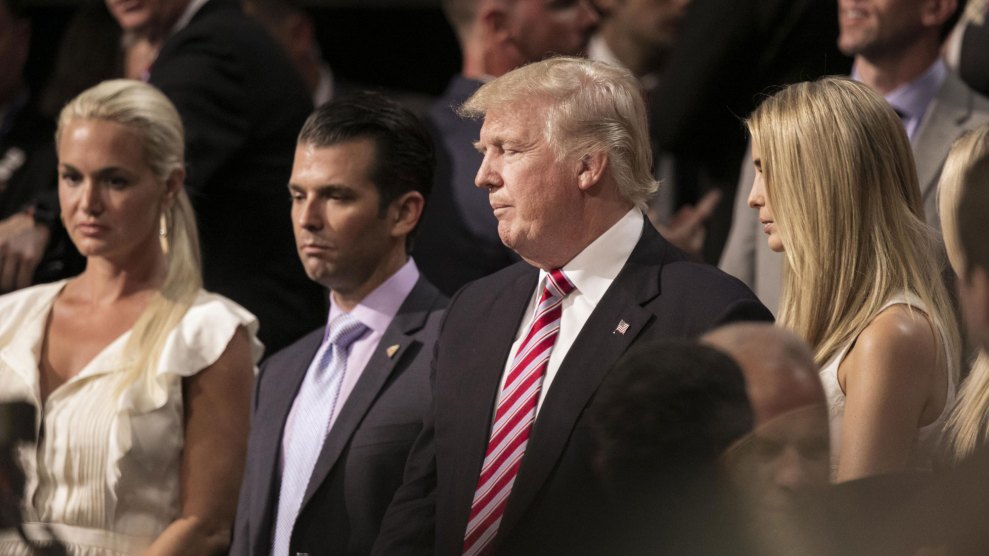 On Thursday morning, Donald Trump Jr., the son and adviser of the Republican presidential nominee, shared the latest Clinton conspiracy theory with his 637,000 Twitter followers: Hillary Clinton may have been wearing an earpiece during the candidates forum held the previous night. Just as surprising was Trump’s source for this latest news flash: the website of Alex Jones, the nation’s top conspiracy theorist. Jones is a 9/11 truther who has suggested that the Sandy Hook massacre never happened and that the government is deliberately turning kids gay by sneaking estrogen into juice boxes. 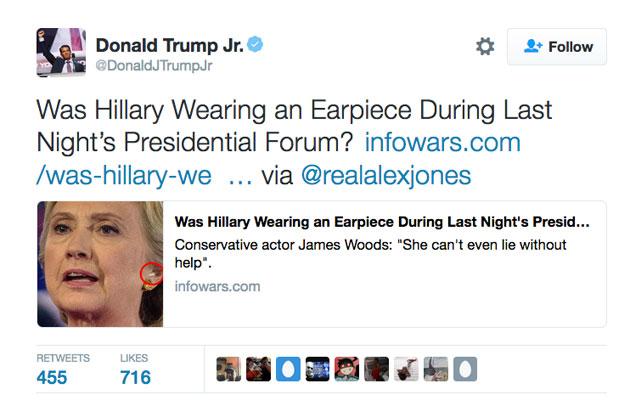 The article that Trump Jr. promoted cited conservative actor James Woods for drawing attention to the supposed earpiece, and it suggested that Clinton needed the earpiece for secret coaching or to receive lines she might forget.

Trump Jr.’s tweet is the latest evidence that the Trump clan views Jones as a legitimate news source and a media figure who deserves courting. Jones was a special guest at the Republican convention in Cleveland. In December, candidate Trump called into Jones’ radio show and said to the host, “Your reputation is amazing. I will not let you down.” The older Trump has cited Jones to support his claim that thousands of Muslim Americans danced on rooftops in New Jersey after 9/11. (They didn’t.) Many of Trump’s recent talking points, such as his questions about Clinton’s health and his warnings of a “rigged” election, were first raised by Jones, who has collaborated with Roger Stone, a longtime adviser for the senior Trump and a well-established conspiracy theorist in his own right. (Stone wrote a book saying that LBJ killed JFK.) Jones has told listeners that he recently spoke with Trump—an assertion the Trump campaign did not deny. As Jones put it in a segment last month, “It is surreal to talk about issues here on air and then word-for-word hear Trump say it two days later.”

The earpiece theory quickly took hold among Trump loyalists, including senior adviser AJ Delgado, who asked Clinton on Twitter, “When will you stop cheating the public?” (The tweet was later deleted.)

Trump backer John Nolte, a former editor at Breitbart News, tweeted, “”What do YOU think was in her ear? Maybe the sniper fire damaged her hearing.”

By the way, Jones’ Infowars website has long claimed that the Bilderberg Group, a collection of government and business leaders whose annual confab is a favorite target of conspiracy-mongers, is a key part of a covert scheme to create a “scientific dictatorship” that will exterminate the “useless eaters,” that is, 80 percent of the human population—and that in 2008 this cabal hand-picked Barack Obama to become president, “with the plan being that Hillary would essentially pick up as president for a third Obama term.”

Back on Earth, the Clinton campaign quickly shot down the earpiece rumors:

HRC spokesman Josh Schwerin: “There was no earpiece” https://t.co/36tFXPcytq