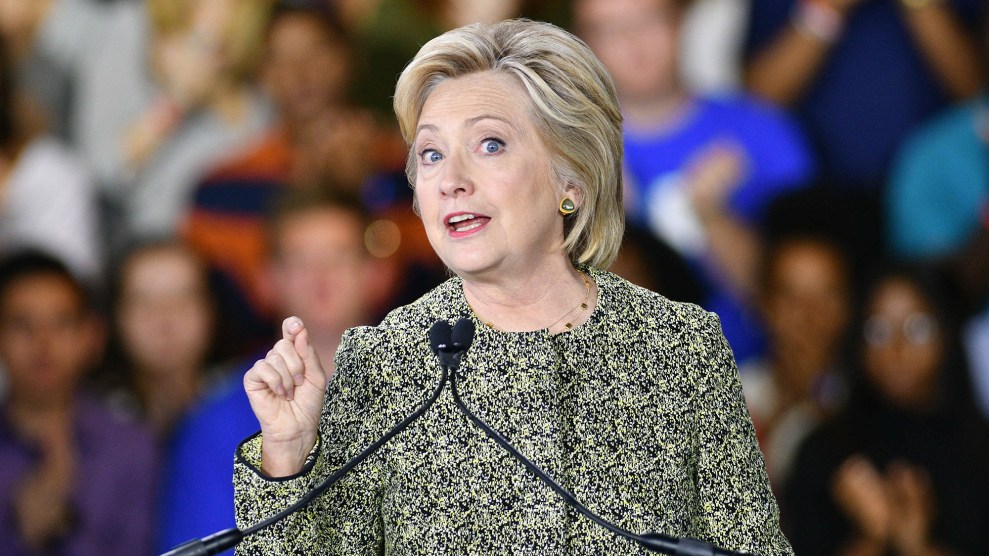 Hillary Clinton is worried about the kids. The Democratic candidate kicked off the week with a push to win over millennial voters who haven’t lined up behind her candidacy, penning an op-ed on the millennial-focused website Mic and hosting a rally aimed at millennials in Philadelphia on Monday. But the gist of her appeal at the rally was essentially the same as her broader campaign message: Elect me because President Donald Trump is too terrifying to fathom.

Polls show that Clinton is struggling to win over younger voters. In 2012, Obama won voters between the ages of 18 and 29 by a 23-point margin over Mitt Romney. Clinton is performing far worse among millennials in recent polls, thanks largely to the outsize support that third-party candidates Gary Johnson and Jill Stein are drawing from that demographic.

In a Quinnipiac poll from last week, when Stein and Johnson were included, Clinton received just 31 percent support from likely voters 18-34. Johnson came in second with 29 percent, while Trump garnered 26 percent and Stein 15 percent. When Stein and Johnson weren’t offered as options, that age cohort sided with Clinton over Trump by a 55-34 margin.

Yet during her speech in Philadelphia, Trump was the lone opponent Clinton mentioned, though she acknowledged that young people who’d never vote for Trump might not have come around to her. “Even if you are totally opposed to Donald Trump, you still may have some questions about me,” she said. “I get that. I want to do my best to answer those questions.” She offered general praise for millennials as a group—”your generation is the most inclusive, progressive, and entrepreneurial we’ve ever seen”—and emphasized the policy proposals that were most likely to appeal to younger voters. (The crowd cheered a bit more loudly when she mentioned working with Bernie Sanders to craft her plan for debt-free college.)

But in the end, her primary selling point was that she was not Trump. There is a “Republican nominee for president who incites hatred and violence like we’ve never seen before,” she said. “Hate speech being normalized. The dog whistles are out in the open.” A pair of “Love Trumps Hate” signs flanked Clinton on stage, and it was clear that she hopes that Trump’s incendiary speeches will be enough to bring around the young voters currently tempted to vote for a third party. Clinton subtly suggested that not voting for her is the same as siding with Trump. “This is going to be close,” she said. “We need everyone off the sidelines. Not voting is not an option. That just plays into Trump’s hands, it really does.”

It was hardly the hope-and-change rhetoric that locked up the youth vote in Obama’s favor eight years ago. But perhaps it’s a better reflection of the times. Clinton had to concede that things don’t feel so rosy this election season. “Politics can be discouraging,” she admitted. “This election, in particular, can be downright depressing sometimes. But it matters, it really does.”