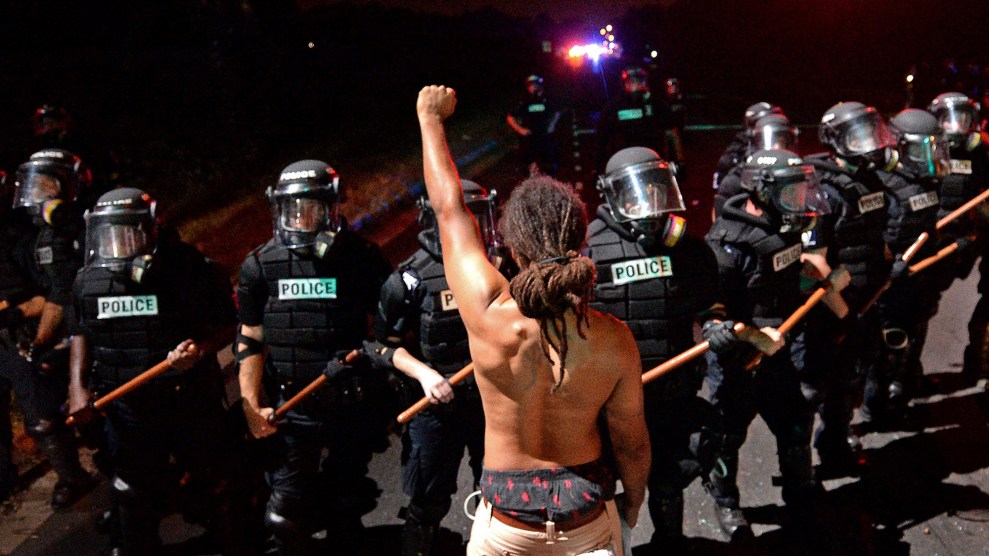 Violent protests erupted in Charlotte late Tuesday night after a police officer fatally shot Keith Lamont Scott, a 43-year-old black man, in the parking lot of an apartment complex earlier in the day. Sixteen police officers were injured during the protests, which included demonstrators blockading a busy highway and looting tractor trailers and a Walmart.

At a Wednesday news conference, Charlotte-Mecklenburg Police Chief Kerr Putney said they’d been searching for a person with an outstanding warrant when they noticed Scott leaving his car with a gun in hand. After officers approached and gave him verbal warnings, police said that Scott left the car and posed “an imminent deadly threat.” He was then shot by a black officer named Brentley Vinson, who was not wearing a body camera at the time. In a video later posted on social media, a woman claiming to be Scott’s daughter said that he was unarmed and was instead holding a book. Putney rejected that claim, saying that officers recovered a gun at the scene, not a book. (Meanwhile, Vinson has been placed on administrative leave while the department investigates.)

The mood was quiet on Wednesday afternoon, though officials anticipated another tense evening. Scott’s shooting came just four days after Terrence Crutcher, a 40-year-old unarmed black man, was fatally shot outside his vehicle by a Tulsa police officer. The Justice Department opened a civil rights investigation into Crutcher’s death, and on Wednesday, US Attorney General Lorretta Lynch said in remarks at the International Bar Association annual conference that the department was “assessing” the incident surrounding Scott’s death.

Here are three things to know about the Scott shooting and the fallout on Wednesday:

Body cam footage: Last September, Charlotte-Mecklenburg police announced it would issue body cameras to all patrol officers in an attempt to increase transparency during confrontations. The directive granted exceptions for officers on the SWAT team and those in tactical units who apprehend violent criminals, citing cost and safety concerns. The Charlotte Observer reported that Charlotte-Mecklenburg officers had fatally shot four people between September 2015 and May 2016, yet only one of those incidents was caught on camera.

Putney told reporters at Wednesday’s press conference that dashcam footage was under review and had recorded parts of the police confrontation with Scott. Because it was part of the investigation, he said, the department wouldn’t release the footage at this time.

In July, North Carolina Gov. Pat McCrory signed into law a bill that made it more difficult to get public access to such footage. Local police departments can decide to release recordings if they want, but if they decline to do so a judge’s order is required. The American Civil Liberties Union’s North Carolina chapter has called on Charlotte police to release the footage from the scene, arguing that the new law doesn’t go into effect until October 1.

Charlotte police’s recent history: In September 2013, a white Charlotte police officer named Randall Kerrick shot and killed Jonathan Ferrell, a 24-year-old unarmed black man and former college football player, while he was looking for help after a car accident. Kerrick was charged with voluntary manslaughter. Last August, a North Carolina judge declared a mistrial after four days of jury deliberation, and authorities opted not to pursue a retrial.

Meanwhile, as my former colleague Jaeah Lee wrote in our May/June 2016 issue, the Charlotte-Mecklenburg PD has been part of a University of Chicago experiment that uses data to identify troublesome cops—those who are likely to abuse their power or break the law—and anticipate future police misconduct.

Calls for an economic boycott: At a press conference on Wednesday, a group of civil rights activists questioned the police’s narrative of events. B.J. Murphy, a representative of the Nation of Islam and longtime Charlotte resident, called on black Charlotte residents to boycott local businesses to “let everybody feel the pain economically of what we feel physically when you kill us.”

“Since black lives do not matter for this city, then our black dollars shouldn’t matter,” Murphy said. “We’re watching a modern-day lynching on social media, on television, and it is affecting the psyche of black people. That’s what you saw last night.”