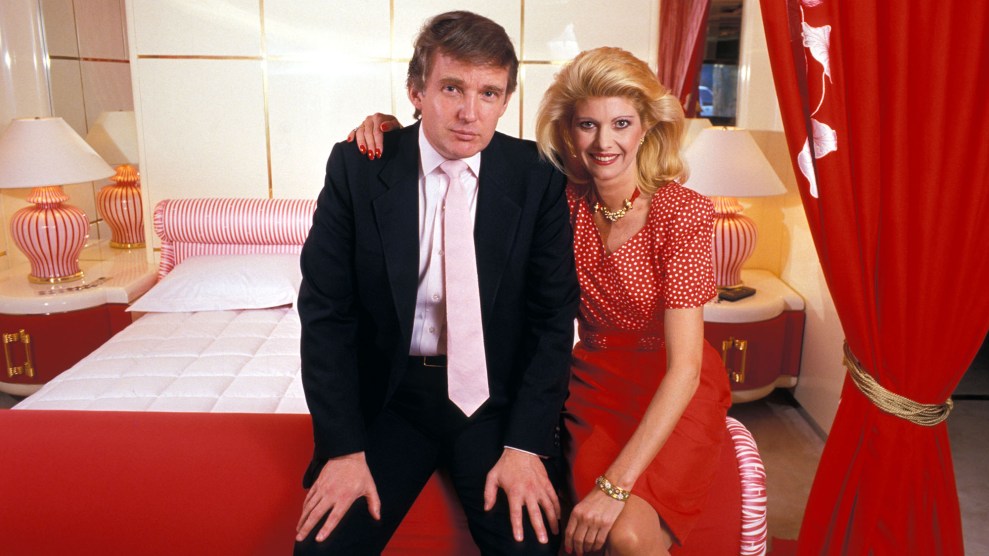 Donald Trump and his wife Ivana in 1988Mario Ruiz/ZUMA

In order to avoid admitting to cheating on his wife, Donald Trump invoked his Fifth Amendment right against self-incrimination 97 times during his divorce proceedings with Ivana Trump in 1990, the Huffington Post reported Friday. So it should come as little surprise that Trump had kind words for a system that allows men to divorce their wives without going to court: Saudi Arabia’s Shariah law.

The Republican presidential candidate praised the Islamic law, or Shariah, system during a 60-second syndicated daily radio commentary called “Trumped!” that he recorded from 2004 to 2008. In a January 2008 segment, Trump discussed a news story of a Saudi man who had divorced his wife for watching a television show while alone at home because, in Trump’s telling, the husband considered it tantamount to being alone with a strange man.

“Men in Saudi Arabia have the authority to divorce their wives without going to the courts,” Trump said. “I guess that would also mean they don’t need prenuptial agreements. The fact is, no courts, no judges—Saudi Arabia sounds like a very good place to get a divorce.”

BuzzFeed first uncovered the show and its website in March, and the Wall Street Journal published some audio and transcripts in July. According to BuzzFeed, stations that still have an archive of the shows cannot release the audio without Trump’s permission.

When it comes to Trump’s beliefs about women, Trump’s radio vignettes often mirror his own life and his past treatment of and attitudes toward women that are now haunting his campaign.

In recent days, Trump has threatened to begin attacking Hillary Clinton for her husband’s infidelities. But it’s Trump who has extensive experience with divorce—and it’s no wonder he would have preferred the Saudi system. Before finalizing his divorce from his first wife, Ivana, Trump began seeing Marla Maples, who would become his second wife. The divorce required five depositions, during which he repeatedly took the Fifth.

Trump’s remarks about Saudi Arabia were not the only commentary from his radio show with relevance to Trump’s own marriages. Trump often used the show to discuss the appearance of female celebrities. In one segment from 2005, Trump noted that pop star Britney Spears had disappeared from a list of the sexiest women alive compiled by FHM, a men’s magazine. “Angelina [Jolie] took over the crown from Britney Spears, who didn’t even make the sexy list this year,” Trump said. “She has gone down, there’s no question about it. That’s what a marriage can do for you.”

His belief that marriage hurts a woman’s appearance wasn’t great news for his own marriage to Ivana. As that union unraveled, he made it clear to her that her looks had deteriorated—and Ivana seemed to internalize that critique and blame herself. “She threw herself into my arms sobbing and crying and saying, ‘Donald doesn’t want me anymore,'” former New York Daily News columnist Liz Smith recently recalled. “‘He has told me, he can’t be sexually attracted to a woman who has had children.'” In order to entice her husband, Ivana got a face lift and a breast augmentation, Smith said.

It didn’t work. Trump was seeing a new woman and setting the stage for his future radio commentary about Saudi Arabia.