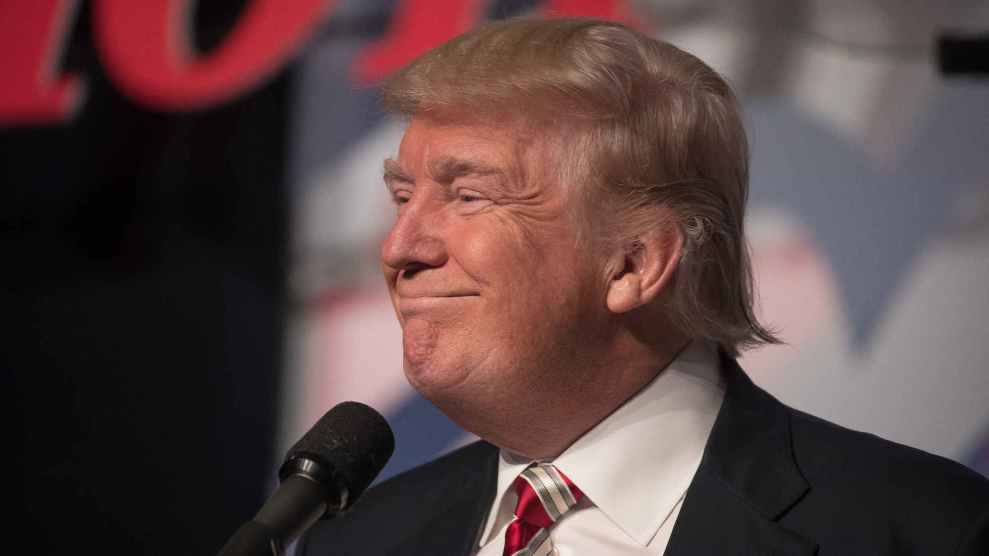 During a Monday afternoon speech, Donald Trump again slammed Hillary Clinton for recently claiming that half of his supporters were racist, sexist, homophobic, xenophobic, and Islamophobic and belonged in a “basket of deplorables.” The GOP presidential nominee asserted that this statement “disqualifies her,” adding, “you can’t lead this nation if you have such a low opinion of its citizens.” Clinton had already said that she regretted the comment (though the generalization, while perhaps politically awkward, was not inaccurate). But Trump was still looking to exploit the remark. Earlier in the day, Trump’s campaign released an ad bashing Clinton for having insulted tens of millions of Americans by calling them “deplorables.” (Two days earlier, Donald Trump Jr. and Roger Stone, a longtime Trump confidante, retweeted a tweet that mockingly celebrated themselves, the elder Trump, conspiracy theorist Alex Jones, Rudy Giuliani, and a white nationalist mascot as “The Deplorables.”)

Despite Trump’s purported outrage over the Clinton remark, the mogul has engaged in his own demonization of Americans that has echoed the “47 percent” comment that landed Mitt Romney in trouble during the 2012 campaign. More than once, the reality television celebrity has dismissed tens of millions of Americans—up to half of all Americans—as shiftless people with no desire to work. During a June 2015 interview on Fox News with Sean Hannity, Trump declared:

Trump had expressed this view before. During a January 2015, interview with Kasie Hunt of MSNBC, he proclaimed, “We have a tremendous amount of people in this country that don’t want to work. They have no inclination to work.”

Trump does appear to believe that the United States is full of losers. During a campaign stop in Wisconsin in March, he groused:

Now you have people that aren’t working. Look, it’s all about incentive. People have to want to go out, they have to want to. We have no incentive in our country anymore. We’re losing in every way. We’re losing in that way because we have so many people that don’t want to work. We have so many people that if given the right incentive would love to work, but they’d love to do it. We don’t have incentives anymore. We don’t have spirit anymore. Our country doesn’t have spirit. We lose in so many ways.

Americans with no spirit, no desire to work, lazing about and feeling entitled—Trump has long been deploring scores of millions of Americans. But for him and his backers, this is not a disqualification. Dismissing these Americans is no slip; it’s a key feature of his campaign.