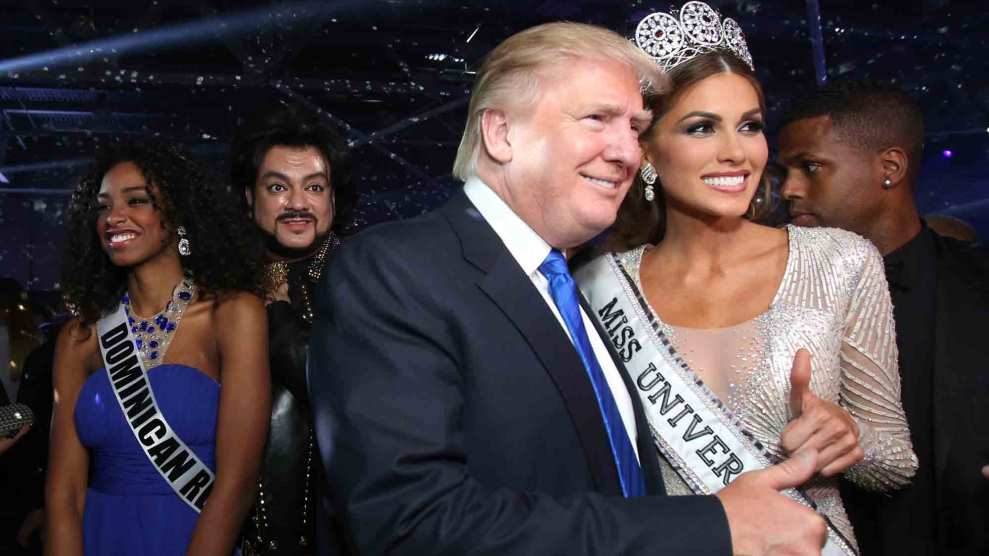 How did an alleged and notorious Russian mobster connected to an illegal international gambling ring run out of Trump Tower end up as a special guest at a Donald Trump event in Moscow in 2013? This may be one of the odder questions of the already-odd 2016 presidential campaign.

On April 16, 2013, federal agents burst into a swanky apartment at Trump Tower in New York City as part of a larger raid that rounded up 29 suspected members of two global gambling rings with operations allegedly overseen by a supposed Russian mob boss named Alimzhan Tokhtakhounov. The Russian was not nabbed by US law enforcement. Since being indicted in the United States a decade earlier for allegedly rigging an ice skating competition at the 2002 Olympics, he had been living in Russia, beyond the reach of Western authorities. And this new gambling indictment did not appear to inconvenience Tokhtakhounov. Seven months after the bust, he was a VIP attendee at Donald Trump’s Miss Universe 2013 contest held in Moscow. In fact, Tokhtakhounov hit the red carpet within minutes of Trump. An alleged crime lord who was a fugitive from American justice was apparently a celebrity guest at Trump’s event.

During the 2016 race, Trump’s associations with Russia have sparked assorted controversies. He has praised Russian leader Vladimir Putin and made a series of contradictory remarks regarding his relationship with the autocrat. (In July, Trump said he had never spoken to Putin, but in a 2014 video, he claimed he had.) Trump has insisted on the campaign trail, “I have nothing to do with Russia.” Yet he has a long history of attempting—and generally failing—to forge deals in that country. And Trump has been surrounded by campaign aides—including onetime campaign chairman Paul Manafort—with close and lucrative business ties to Russia and Putin allies.

Contrary to his claim of having nothing to do with Russia, Trump did pull off one major deal there: staging the 2013 Miss Universe pageant in the nation’s capital. At the time, Trump co-owned the contest with NBC. The event landed him in the company of Tokhtakhounov and other high-profile Russians. And Trump hoped it would also bring him close to Putin. Months before the contest, he tweeted, “Do you think Putin will be going to The Miss Universe Pageant in November in Moscow – if so, will he become my new best friend?”

Putin didn’t show up, but, according to Russian media accounts and photos of the event, Tokhtakhounov did. He was part of a crew of wealthy and powerful Russians who, according to a press report, were treated as VIPs. Also present were Vladimir Kozhin, a top government official and member of Putin’s inner circle (who the following year would be hit with US sanctions in response to Russia’s invasion of Ukraine) and Aras Agalarov, a Russian billionaire oligarch close to Putin with whom Trump wanted to develop a high-rise in Moscow. (Agalarov played a role in drawing the beauty contest to Moscow; it was held in a concert hall owned by his family business empire, and his son, a middling pop star, performed at the pageant.) After the event, Trump boasted to the New York Post, “Almost all of the oligarchs were in the room.”

Asked how Tokhtakhounov came to be part of the red-carpet crowd at the event, a spokeswoman for Miss Universe, which Trump sold in 2015, said she was not familiar with his name.

Alimzhan Tokhtakhounov’s tale is an intriguing story of sports, Hollywood stars, poker, and alleged crime. The indictment filed by Preet Bharara, the US attorney in Manhattan, which triggered the 2013 raid, identified Tokhtakhounov as a vory v zakone—or a vor—a Russian term for a select group of the highest-level Russian crime bosses. A vor receives tributes from other criminals, offers protection, and adjudicates conflicts among other crooks. The indictment charged that Tokhtakhounov used his “substantial influence in the criminal underworld” to protect a high-stakes illegal gambling ring operating out of Trump Tower. He sometimes deployed “explicit threats of violence and economic harm” to handle disputes arising from this gambling operation. The indictment noted that in one two-month period he was paid $10 million by this outfit for his services.

The operations of the gambling scheme were handled by two other men: Vadim Trincher and Anatoly Golubchik. The indictment alleged that they and others ran “an international gambling business that catered to oligarchs residing in the former Soviet Union and throughout the world,” used “threats of violence to obtain unpaid gambling debts,” and “employed a sophisticated money laundering scheme to move tens of millions of dollars…from the former Soviet Union through shell companies in Cyprus into various investments and other shell companies in the United States.” According to the US attorney, their enterprise “booked sports bets that reached into the millions of dollars” and laundered approximately $100 million.

Trincher, a dual citizen of the United States and Israel, was a championship professional poker player who had purchased a Trump Tower apartment located directly below an apartment owned by Donald Trump. In 2009, Trincher had paid $5 million for the posh pad. Two years later, he and his wife had reportedly hoped to hold a fundraiser in the apartment for Newt Gingrich’s presidential campaign, but they had to cancel the event because of the presence of mold caused by a water leak. During one court hearing, the US attorney’s office said that Trincher, then 52 years old, directed much of the racketeering enterprise from this Trump Tower apartment. “From his apartment, he oversaw what must have been the world’s largest sports book,” Assistant US Attorney Harris Fischman remarked. “He catered to millionaires and billionaires.”

The indictment also targeted an associated gambling ring operated by Trincher’s son Illya, Hillel Nahmad, the son of a billionaire art dealer, and others. (Nahmad also reportedly owned the entire 51st floor of Trump Tower.) This crew managed a high-stakes betting operation and money-laundering shop. The indictment charged another Trincher son named Eugene and several others with running illegal high-stakes poker rooms in and around New York City. This group included Molly Bloom, who had previously earned a reputation as an organizer of private poker games for celebrities, including Leonardo DiCaprio and Tobey Maguire. Following the raid, the New York Daily News reported that a witness told the paper that “games held by the crew in a Trump Tower apartment…[were] poker ‘on steroids,’ with cameos by movie and sports stars, including A-Rod.”

Shortly after the indictment was issued, Tokhtakhounov told a Russian television channel that the case against him was “yet another fairy tale from the Americans.” He claimed the prosecutors had included him in the indictment “to give the situation significance.” He acknowledged that he knew two of the defendants and had placed bets with them. “Of course, in conversation,” he added, “I might have given them advice on how to do things better.”

Tokhtakhounov was trying to depict himself as a victim unfairly targeted by the United States. In 2002, he was indicted for allegedly fixing skating matches at the Salt Lake City Olympics. (The feds believed he had rigged events so that Russians would take home a gold and a French pair would win another gold—and he would pocket a French visa.) He was arrested in Italy, but soon Tokhtakhounov, who denied the charges, was let go and made his way back to Russia.

Something of a celebrity in Russia, Tokhtakhounov has engaged in various enterprises. He once owned casinos in Moscow. He claimed to be an organizer of pop concerts and fashion shows. He represented a modeling association, and he wrote novels. He lived in a high-end apartment building in Moscow and kept a palatial country house outside the city. He is currently wanted by Interpol for conspiracy to commit wire fraud, bribery conspiracy, wire fraud, and “bribery in sport contests.”

A year following the Trump Tower raid, Trincher and Golubchik, after pleading guilty, were each sentenced to five years in prison. Each man was ordered to forfeit more than $20 million in cash, investments, and property. (Trincher’s sons, Nahmad, and Bloom also pled guilty.) Tokhtakhounov, the US attorney’s office noted, remained a fugitive.

Trump has cited the 2013 Miss Universe contest as proof he possesses serious foreign policy experience. In May, he told Fox News, “I know Russia well. I had a major event in Russia two or three years ago, which was a big, big incredible event.” And it provided the reality television mogul the opportunity to hobnob with a Putin crony who is now under US sanctions, various oligarchs who are chums with the Russian leader, and an alleged Russian mafioso accused by the US government of protecting a global criminal enterprise that operated directly below one of Trump’s own apartments in Trump Tower. What a small world.