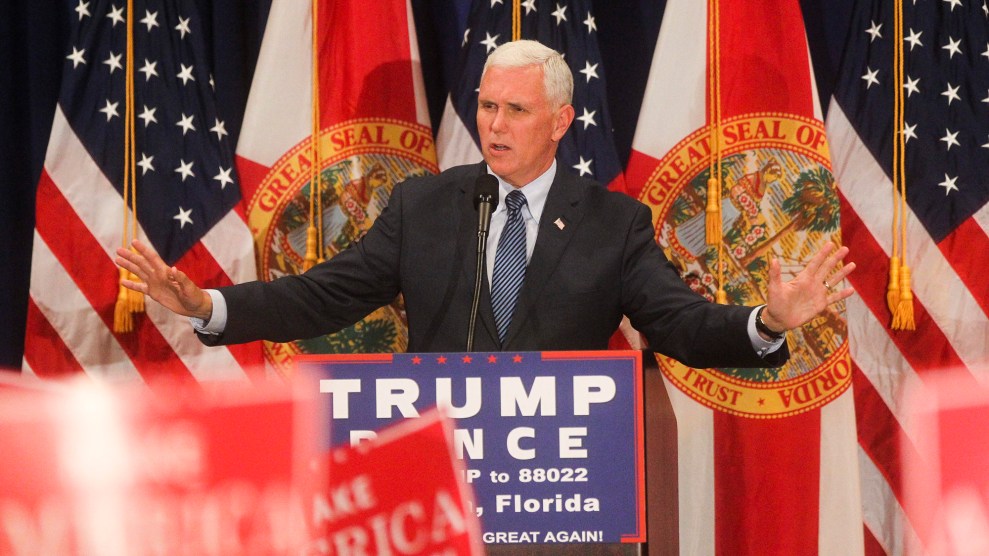 As Mike Pence prepares for the first vice presidential debate on Tuesday, the refugee policy for this Republican governor’s home state of Indiana drew a strong rebuke from a conservative federal appeals court. In an opinion issued on Monday, the 7th Circuit Court of Appeals slammed Pence’s treatment of Syrian refugees, saying his effort to block their resettlement was based on “no evidence” and constituted “nightmare speculation.” The final decision for the three-member panel was written by Judge Richard Posner, who was appointed by Ronald Reagan. Also on the bench was Judge Diane Sykes, who was appointed by George W. Bush and was recently named by Trump’s campaign as a potential Supreme Court nominee.

After the Paris terror attacks last November, Pence was one of 31 governors who opposed the resettlement of Syrian refugees in their respective states. In Indiana, Pence declared that state agencies would no longer cover the cost of some key social services for any refugees whose country of origin was listed as Syria on their refugee documents.

“Indiana has a long tradition of opening our arms and homes to refugees from around the world but, as governor, my first responsibility is to ensure the safety and security of all [Indiana residents],” Pence said at the time.

A resettlement agency called Exodus Refugee Immigration sued the state, saying its refusal to help resettle Syrian refugees constituted discrimination based on national origin. According to the court document, 174 Syrian refugees were settled in Indiana in the last fiscal year.

In March, a federal judge blocked Pence’s order, saying his withholding of state resources “clearly discriminates against Syrian refugees based on their national origin.” The case was appealed and brought before a panel of three Republican-appointed judges who upheld the injunction.

In his decision, Judge Posner pointed out there have been no known cases of Syrian refugees being arrested or prosecuted for terrorist acts in the United States. In response to Pence’s argument that his policy is not based on national origin discrimination but rather on national security concerns, Posner wrote, “That’s the equivalent of his saying (not that he does say) that he wants to forbid black people to settle in Indiana not because they’re black but because he’s afraid of them, and since race is therefore not his motive he isn’t discriminating. But that, of course, would be racial discrimination, just as his targeting Syrian refugees is discrimination on the basis of nationality.”

Attempts to suspend Syrian refugee resettlement in individual states has not fared well so far. Texas and Alabama both filed lawsuits against the federal government over the placement of Syrian refugees in those states. Both cases were dismissed in federal court and have since been appealed.

Since becoming Trump’s vice presidential pick, Pence has been a supporter of Trump’s proposal to stop accepting Syrian refugees into the country. He told NBC’s Meet the Press that the resettlement program “puts safety and security of the American people second to the agenda of the UN or to liberals in this country.”

One of the judges who oversaw the case was Diane Sykes, who is known for writing a decision restricting women’s access to birth control and defending the right of a Christian student group to exclude LGBT people. She is also a potential Supreme Court pick for Donald Trump.

You can read the full decision here: