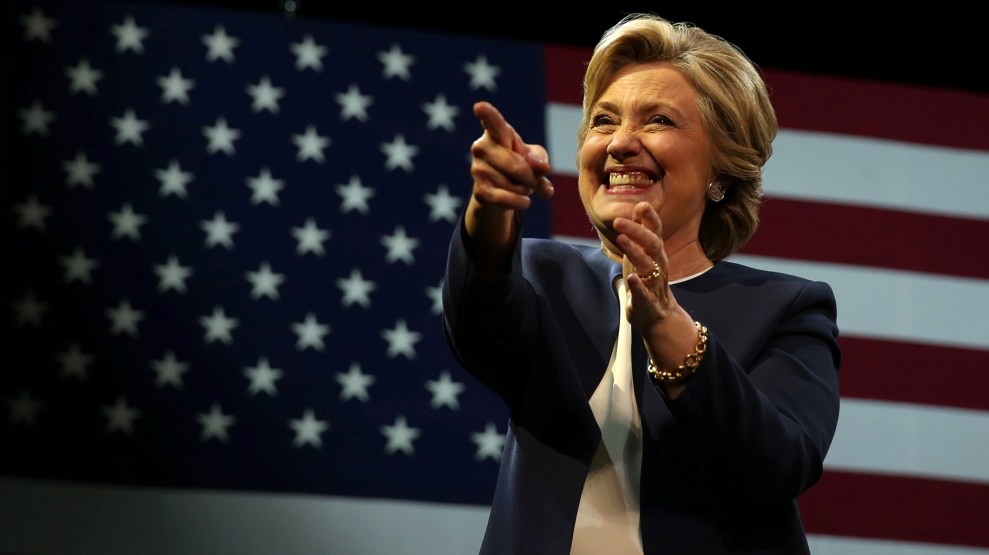 With Donald Trump tanking in polls across the country, Hillary Clinton’s campaign is broadening its ambitions, redirecting money and effort to states beyond the typical battlegrounds that she’d need to secure the 270 electoral votes to get to the White House.

During a conference call with reporters on Monday, campaign manager Robby Mook announced that the campaign intends to spend more time and energy bolstering down-ballot Democrats in hopes that Trump’s cratering poll numbers could lead to success for Democrats in House and Senate races. “Donald Trump is becoming more unhinged by the day, and that is increasing prospects for Democrats further down the ballot, because of higher-than-expected turnout and enthusiasm,” Mook said, citing internal campaign tabulations that indicate more people will vote in 2016 than in any prior presidential election.

Mook announced that the campaign would be adding $2 million in new spending in Arizona on TV ads, digital ads, and direct mail. It is also dispatching Sen. Bernie Sanders, Chelsea Clinton, and Michelle Obama to campaign in the state this next week. Mook said Clinton herself might start stumping in the state in the final three weeks before Election Day.

Arizona was not generally considered a competitive state at the beginning of the year, but polls have shown a close race there, with three polls this month giving Clinton a small lead. It’s hard to fathom a path to Electoral College victory for Trump without Arizona, but FiveThirtyEight gives Clinton a 54.6 percent chance of winning the state if the election were held today.

“Donald Trump’s hateful rhetoric and deeply disrespectful remarks about Sen. John McCain have made Arizona more competitive,” Mook said. “This is a state that would really foreclose a path for Donald Trump to win the White House.”

Just how confident is the Clinton campaign feeling that Trump’s support has bottomed out so deeply that new territories are up for grabs? The campaign is even going to start airing a short burst of ads in Texas, a state Barack Obama lost by 16 percentage points in 2012.

Just in: @HillaryClinton‘s campaign is launching a one-week ad buy in Texas, per an aide.