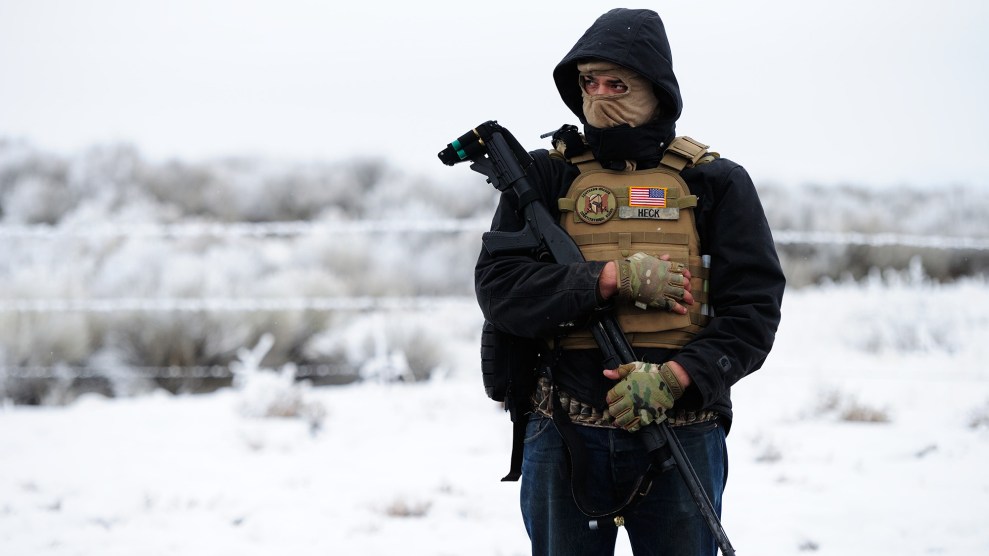 When Mother Jones reporter Shane Bauer signed up to train with a militia group in California last spring, he came equipped with woodland camo, combat boots, and a semi-automatic rifle. On a mountainside outside the San Francisco Bay Area, he joined other similarly armed recruits. Over the course of several trainings, they learned about marksmanship, land navigation, patrolling, rappelling, radio communication, and code language. They also learned how to hold defensive positions and set up bases.

The group Bauer joined was the California State Militia (CSM), which describes itself as a collection of “concerned citizen soldiers” seeking to defend America from all enemies, foreign and domestic. CSM doesn’t conceal its activities; it shares photos of its trainings on Facebook. In March, CSM’s Bravo Company posted snapshots of camo-clad militia members gathered in the woods, setting up camp and aiming their rifles among the towering pines. “We had fun, built stronger relationships and ate great,” one member wrote on the Facebook page.

These military-style trainings have no connection to the US military or a government-sponsored militia. Yet they are legal so long as they don’t cross the line into inciting violence or civil unrest. Under California law, it is illegal for a “paramilitary organization” to train with weapons if it engages in “instruction or training in guerrilla warfare or sabotage.” Violators are subject to one year of imprisonment and/or a fine of up to $1,000. When I asked the California attorney general’s office if there was any reason to believe that CSM’s activities might violate state law, a spokeswoman said the office was unable to provide any legal analysis and declined to comment further.

Nationwide, 41 states have laws that place restrictions on private paramilitary activity. The laws fall into two categories: those that limit or regulate private military groups and those that limit or regulate private military training. The penalties vary. In Idaho, training people in ways to maim or kill with the intent to further “civil disorder” is punishable by up to 10 years in prison and/or up to a $50,000 fine. In Pennsylvania, training people to use guns or bombs with intent to further civil disorder is a first-degree misdemeanor. Arizona law forbids anyone besides the government from maintaining “troops under arms”; doing so is a class 5 felony—a minor crime comparable to improperly storing used tires. 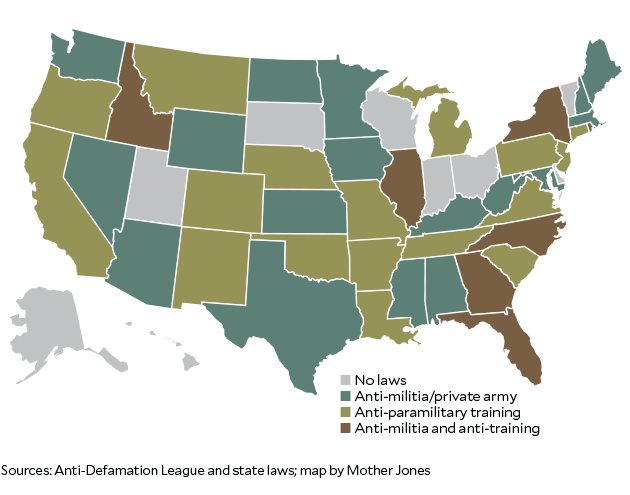 In addition to joining a California militia, Bauer participated in a “border op” partly organized by the Arizona and Colorado chapters of the Three Percent United Patriots (3UP), which operates under a military-style command structure. Among the operation’s participants were members of the Borderkeepers of Alabama. I contacted five district attorneys and four attorneys general in California, Arizona, Colorado, and Alabama to ask about the legality of militia activity in their jurisdictions. All the DA and AG offices I reached out to either declined to comment or said there wasn’t enough information to determine whether the militia groups in their area were operating legally. The only exception was the district attorney’s office in Larimer County, Colorado, which said there was “no reason to believe that 3UP is in violation” of the state’s anti-paramilitary training law.

Some anti-paramilitary laws have been around since the Reconstruction Era, when they were intended to prevent the reemergence of Confederate armies. Many have their roots in the 1980s, when hate groups like the Ku Klux Klan began running training camps. The Anti-Defamation League, which monitors extremist activity, was so alarmed by these reports that it drew up model anti-paramilitary legislation, and over the next decade, 24 states passed restrictions on paramilitary activity. The new ordinances were enforced against white supremacists in a few scattered cases.

“If these militias are just running around the woods with guns, most states don’t really care.”

In the 1990s, self-styled citizen militia groups proliferated across the country, marking the beginning of the modern right-wing militia movement. Officials hesitated to use the laws to crack down on militia activity. Even in Michigan—then a hotbed of militia activity—the attorney general’s office declined to take a position on whether the Michigan Militia was in violation of state law. To date, there are no known cases of these laws being used against “patriot” militias, according to Mark Pitcavage, a senior research fellow with the Anti-Defamation League’s Center on Extremism. “They’ve become sort of forgotten little laws,” he says.

When militia members are accused of breaking the law, prosecutors ignore anti-paramilitary laws and pursue more serious charges. In 2014, hundreds of armed militiamen gathered at Cliven Bundy’s ranch in Nevada to protest the confiscation of his cattle as a result of his failure to pay more than $1 million in unpaid federal grazing fees. Some aimed their guns at federal authorities and ultimately forced the Bureau of Land Management to release the cattle. Afterward, the federal government slapped the showdown’s leaders, including Bundy, with a slew of federal charges, including conspiracy, extortion, obstruction of justice, and assault on a federal officer. Earlier this month, after a lengthy undercover FBI investigation, three militiamen in Kansas were arrested for plotting to bomb a Somali apartment complex. They were charged with conspiracy to use a weapon of mass destruction.

State anti-paramilitary laws are often ignored because they have few teeth, says Pitcavage. “You can take a case federal with conspiracy laws and get much more time and potentially much harsher penalties than with most of the state laws,” he says. “In some of these cases, the feds don’t even give the state the option. They come in and they just charge these guys with conspiracy and there’s no need for the state to try and apply a paramilitary training statute.”

Even as militia members talk of the day when they might put their training to the test to resist the government, the decision not to scrutinize militia activity more closely may be a strategic one: Prosecutors and law enforcement agencies don’t want to risk angering militia supporters and generating more support for the militia movement. “For the most part,” says Pitcavage, “if these militias are just running around the woods with guns, most states don’t really care.”