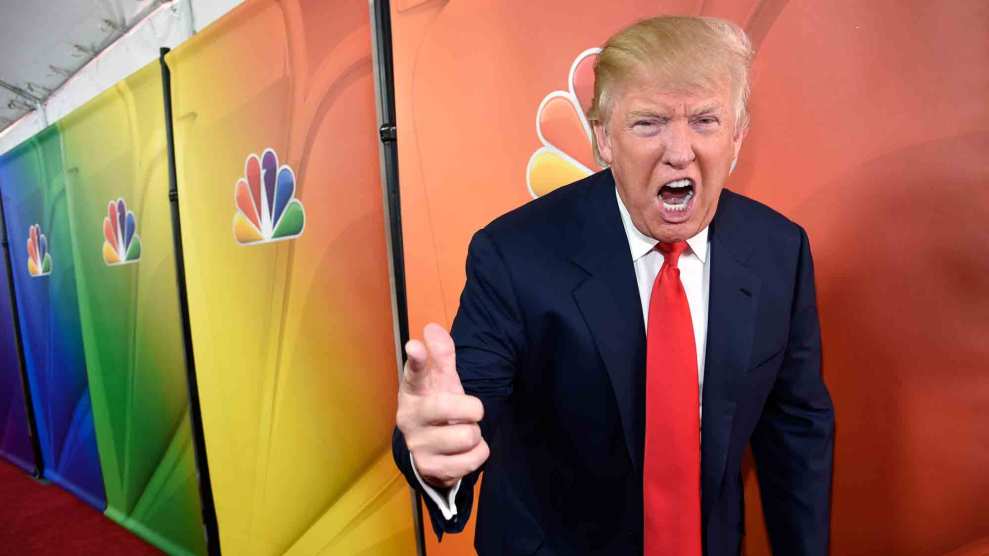 America is broken. Into two irreconcilable halves. In a historic and baffling election—after a brutally ugly campaign—Donald Trump, an erratic candidate who campaigned as a bully and a bigot, who demonstrated a weak understanding of crucial policy matters, who set a record for false statements, who encouraged violence, who was caught bragging about committing sexual assault, who hid key information about his life from the public, and who was called by members of his own party a con artist, a racist, and a danger to the nation, won the votes (if not the hearts and minds) of tens of millions of Americans and the keys to the White House. Pocketing a huge majority of non-college-educated white voters, Trump prevented Hillary Clinton from becoming the country’s first woman president. Hate did trump. The Republicans’ animus-driven effort yielded a decisive victory for the reality television celebrity and left the nation bitterly and fundamentally divided.

Pushing a message of inclusion and declaring that “love trumps hate,” Clinton pulled together a diverse coalition of voters reflecting the demographic changes underway in America, much like the majorities assembled by Barack Obama. Trump mounted a demagogic effort fueled by anger, resentment, fear, and lies that appealed mostly to older white guys without much education. The 2016 election, because of Trump’s thuggish conduct and racist and misogynistic statements and actions, marked a severe decline in US political discourse.

This was a campaign of profoundly conflicting attitudes and opposing perspectives. Trump depicted the United States as a down-and-out hellhole, overrun by undocumented Latino immigrants and criminals (including ISIS infiltrators) and sold out by craven political and media elites in league with international bankers (shades of The Protocols of the Elders of Zion). He was the candidate of disruption and chaos, claiming he would be the do-whatever-it-takes, tough-guy champion of Americans who felt screwed over by the powers that be. He was the strongman who could slay the treasonous enemies of American greatness within and single-handedly restore the lives and dreams of hardworking folks and bring about the return of some mythical (whiter?) America. Trump wielded powerful themes: revenge, destruction, and revival. He made big promises; he didn’t sweat the pesky specifics.

Clinton pitched an utterly different view: The United States, a wonderful mixing bowl, was already great and on the mend after the Bush-Cheney recession, but the nation needed to strive in a communal fashion to help those still struggling and become even greater. She was the roll-up-your-sleeves-and-get-to-work policy wonk, with oodles of experience to do the job. Her message was more cerebral, not as visceral. Never known as an effective firebrand, Clinton campaigned as if this were a job interview, not a holy crusade. Her motto, “Stronger Together,” was vague but a counter to Trump’s politics of hate and accusation. The opposites were well defined: bare-knuckled instincts versus deliberative smarts, hot passion versus cool competence, instability versus experience, R versus D, and, yes, macho man versus pioneering woman.

The Clinton-Trump face-off was the most policy-free election of recent decades. As soon as Clinton secured the Democratic nomination and turned toward Trump, her likely opponent, she focused less on the policy differences—of which there were many that cut along traditional D/R and progressive/conservative lines—and aimed at what she figured was his greatest weakness: Trump himself. She made his temperament the key topic. With polls showing he was not a popular or trusted person, this was an obvious strategy, especially since Clinton, too, scored poorly in such polls. She zeroed in on his egotism, his arrogance, his lack of self-control, his divisive and vengeful nature. Could he be trusted with nuclear weapons? With the economy? Top experts on national security and economics said no. Surely, all these people couldn’t be wrong.

Trump even obliged by acting throughout much of the campaign in an egotistical, arrogant, undisciplined, and mean-spirited manner. He lashed out. He engaged in juvenile name-calling. He was obsessed with personal slights—and with himself, constantly praising himself in the third person and citing polls (when they were good) to declare he was the best thing ever. He insulted the parents of an Army captain who lost his life in Iraq. In the wee hours, he tweet-feuded with a former Miss Universe. He was cheered by white supremacists and mainstreamed the alt-right. He allied himself with conspiracy theorist Alex Jones, who has claimed 9/11 was an inside job (orchestrated or allowed to happen by Republicans!) and who insisted the Sandy Hook shooting massacre was a hoax. Trump’s odd behavior yielded one of the best put-downs of the campaign, courtesy of President Barack Obama: “Over the weekend, his campaign took away his Twitter account. Now, if your closest advisers don’t trust you to tweet, then how can we trust him with the nuclear codes?” Millions of American voters disagreed. (They also told Obama they didn’t give a damn about his legacy. They would elect a racist to replace the first black president.)

Trump’s obvious deficits—his bad temper, his crackpot birtherism, his refusal to release his taxes, his crude and boorish ways, his history of stiffing contractors, his past ties to the mob, his bankruptcies, his ill-informed policy statements, his multiple flip-flops, his climate change denialism, his love affair with Vladimir Putin, his boasts of grabbing women “by the pussy”—were of little concern to a majority of voters (or at least a majority of those in the key swing states). They were either too damn mad or could not stand Clinton. Maybe because she was a woman, maybe because of…whatever. Trump told many more lies than she did, but she was judged untrustworthy.

Policy details—Clinton’s strength—didn’t matter. This was a battle of personalities and abilities. Trump devoted little time to backing up his “Make America Great Again” vow with substance. The only policy he truly seemed to care about was the wall that he vowed he would build on the US-Mexico border with you-know-who paying for it. It was a cure-all for the problems of illegal immigration, ISIS terrorists infiltrating America, and the opioid epidemic in New Hampshire. The old saying is that if all you have is a hammer, everything looks like a nail. As one former Trump adviser told me, in the early days of his campaign, his lieutenants made sure that he was always prepared to discuss the wall. That way, if any subject came up that was tough to talk about, he could always pivot to the wall. Former aides noted the obvious: This was a man with attention issues. That itself should have been another disqualification, but it was not.

With Clinton also distrusted by a majority of voters, Trump didn’t need much policy chops. He pummeled her as the embodiment of all that his followers hated and feared about the nation: She was a corrupt, treasonous member of an elite in league with globalists trying to suck the lifeblood out of America. Trump exploited the Clinton and Obama hatred on the right. At rallies and at the GOP convention, his devotees wore “Hillary for Prison 2016” T-shirts and shouted “lock her up.” These were festivals focused on hatred. Trump encouraged this, as if the United States were a phony democracy where politicians attempt to imprison foes. He pledged to send her to jail if he won. (At the end of the final presidential debate, top Trump surrogate Rudy Giuliani snarled at me, “She should already be in jail.” For what? He didn’t say.)

Clinton’s email imbroglio handed Trump ammunition for his over-the-top assault. She had screwed up and taken too long to explain and apologize for this misjudgment. Her failure to separate herself from the Clinton Foundation and its funders posed another problem. These controversies were not concocted by the right, but they were certainly not nearly as bad as Trump’s alleged sexual assaults, his lack of transparency, his Trump University fraud case, his former ties to the mob, and his modeling firm’s use of models without work visas. Still, these episodes, often with mainstream media assistance, were hyped beyond reason and allowed Republicans and conservatives to peg their hatred to real-world events. Trump made her the focus of all the wrath he had inspired, and he kept pushing this button: She was a liar, she was crooked, she was a criminal, she was a mobster. He also contended that she was a weak woman who did not look presidential. (Sorting out how sexism affected the 2016 contest—from media coverage to voter attitudes—will be an honorable task in the weeks, months, and years to come.) Trump normalized demonization, tossing aside the standard courtesies of political debate. He made the race a test of trash-talking.

All of this was mirrored in the candidates’ events. Trump rallies were infused with pessimism and rocked with loathing. These were people pissed off at having to press 1 for English and 2 for Spanish; some felt economically insecure, some felt culturally threatened by the changing complexion of the United States. Clinton events were models of earnestness and, dare one say it, hope. Hers looked like America. His were uni-tonal. Politics is often a cultural clash. This race more so than ever. Mars and Venus collided. It was tribal warfare between Trump’s us-against-them nation and Clinton’s we’re-all-in-this-together coalition. The fight was not really over trade policy. It was about which America was ascendant, and the vision of the angry and the lesser educated triumphed. The alt-right, the Ku Klux Klan, the anti-Semites, and, by the way, Vladimir Putin won. (The Russian hack of US democracy worked—an important story that will require deeper exploration in the weeks and months ahead.)

This horrid election settled the primary issue at hand: who will move into the White House. But it did not resolve the fundamental conflicts that animated the most cracked and awful presidential campaign in modern times. The forces of animus have taken control of this country. And there is no telling what comes next.