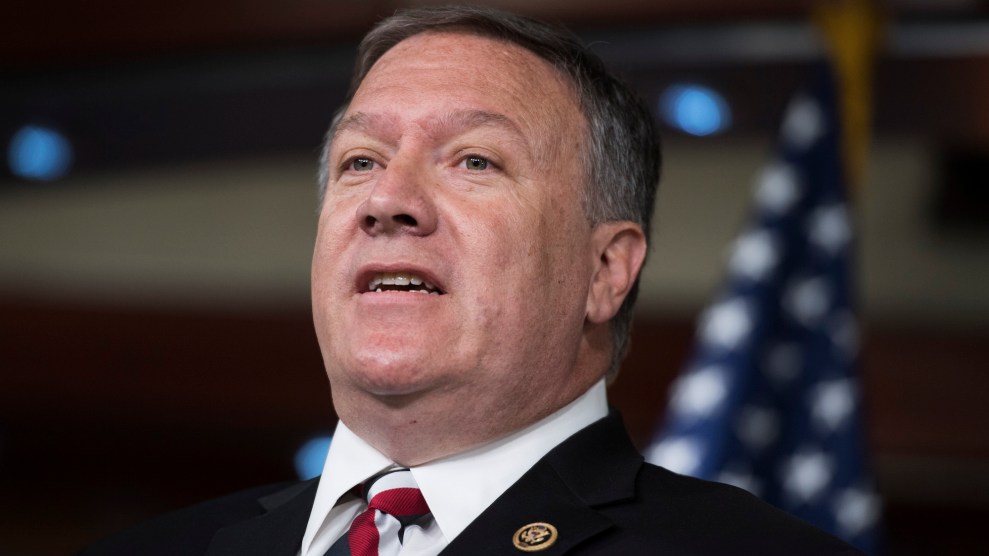 On Friday morning, President-elect Donald Trump named Rep. Mike Pompeo (R-Kans.), a member of the House Intelligence Committee with a history of hardline positions and controversial statements, to be his CIA chief.

Pompeo, a lawyer and former Army officer, is probably best known to the public for his role on the House Benghazi Committee. He was one of the committee’s harshest and loudest critics of Hillary Clinton and the Obama administration, once claiming that the administration’s response was “worse in some ways” than the Nixon White House’s cooperation with Watergate hearings. While on the committee, Pompeo pushed false theories, including Hillary Clinton’s supposed reliance on longtime adviser Sidney Blumenthal for her intelligence. With Rep. Jim Jordan (R-Ohio), he issued his own final Benghazi report, which was more critical than the Republican committee’s findings.

Pompeo holds extremely hawkish views on key intelligence and national security issues. He has long fought the Iran nuclear deal and led the Republicans who charged that “side deals” between Iran and the International Atomic Energy Agency were keeping secret dangers hidden from US officials. (Arms control experts and US officials have said such agreements are standard practice.) On Thursday, he tweeted that he would push to end the deal under Trump.

I look forward to rolling back this disastrous deal with the world’s largest state sponsor of terrorism. https://t.co/bifC97jWpY

Pompeo also wants to roll back surveillance reforms, which ended the NSA’s ability to collect phone records, or metadata, in bulk. In an opinion piece for the Wall Street Journal in January, he and former Justice Department lawyer David Rivkin Jr. said the reform had “dumbed down” surveillance. “Congress should pass a law re-establishing collection of all metadata, and combining it with publicly available financial and lifestyle information into a comprehensive, searchable database,” Pompeo and Rivkin wrote, arguing for a vastly expanded surveillance tool. Trump supported reinstating bulk metadata collection during the Republican presidential primaries.

Torture techniques may also come back up for debate under Pompeo. Like Trump, he has criticized the ban implemented by the Obama administration on waterboarding and other so-called “enhanced interrogation techniques.”

Intelligence professionals mostly welcomed Pompeo’s appointment. John McLaughlin, a former CIA deputy director under George W. Bush, wrote in an email to Mother Jones that “Rep. Pompeo looks like a well-qualified candidate for CIA Director. He is a serious member of the House Intelligence Committee who seems to work hard to understand the issues.” Rep. Adam Schiff (D-Calif.), the top Democrat on the House Intelligence Committee and another member of the Benghazi inquiry, also praised Pompeo in a statement as “very bright and hard-working.” Schiff added, “While we have had our share of strong differences—principally on the politicization of the tragedy in Benghazi—I know that he is someone who is willing to listen and engage.”

Noting Pompeo’s record of controversial comments, McLaughlin sent a gentle warning to the future CIA head. “Fair enough for a congressman,” McLaughlin said, “but as CIA director, he will have to approach such issues dispassionately, some would say clinically.”