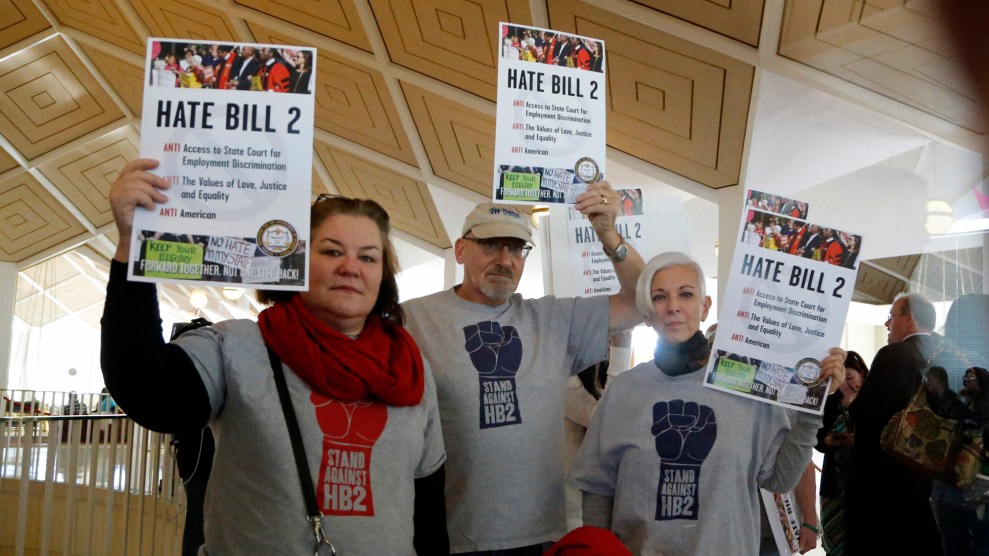 In a surprising move, North Carolina lawmakers ended a special session on Wednesday without repealing House Bill 2, one of the country’s most sweeping anti-LGBT laws. The decision to leave the “bathroom bill” on the books came as a shock after Governor-elect Roy Cooper announced earlier in the week that leaders in the Republican-majority Legislature had promised to get rid of it. It seemed like a done deal, but on Wednesday the state Senate opted against a repeal, while the House adjourned without voting, leaving the law intact. “The Republican legislative leaders have broken their word to me and they have broken their trust with the people of North Carolina,” Cooper told reporters.

But why, and what went wrong?

To understand the drama in North Carolina, you need to first understand why Republicans had initially agreed to repeal HB2—which blocks transgender people from bathrooms of their choice and leaves other people open to discrimination. Republican leaders in the Legislature supported the law but told Cooper they’d get rid of it in exchange for something else: Charlotte, the state’s biggest city, had to nix a local nondiscrimination ordinance that protected LGBT people in the city. (Charlotte’s ordinance was a main reason why Republicans had wanted to pass HB2 in the first place, because, among other things, HB2 prohibited other cities from creating similar nondiscrimination ordinances.) With the offer on the table, Charlotte took the next step. After getting a call from Cooper, the Charlotte City Council on Monday voted to repeal key parts of its ordinance, and then Republican Gov. Pat McCrory—a passionate supporter of HB2—called for a special session of the Legislature to do away with the controversial law.

Problems quickly arose. On Tuesday, Republican leaders accused the Charlotte City Council of acting in bad faith by keeping parts of its nondiscrimination ordinance in place—the council had only gotten rid of the section dealing with LGBT protections in public accommodations and bathrooms, not the sections that prevented discrimination by city contractors or taxi drivers. “I think the city of Charlotte has been as disingenuous as anybody I’ve ever seen,” said Republican state Sen. Harry Brown, according to the Charlotte Observer. Charlotte’s city attorney said council members thought they’d done enough by addressing the issues around the public accommodations in HB2, but GOP leaders were not appeased.

On Wednesday morning, hours before the Legislature was set to meet for its special session, the Charlotte City Council called a rare emergency meeting and repealed the rest of its ordinance—effective immediately. When the special session began, however, Democrats did not get what they had hoped. A Republican leader in the Senate introduced a bill that would repeal HB2 in part but would still temporarily ban cities like Charlotte from creating nondiscrimination ordinances to protect LGBT people. LGBT rights groups were outraged—the National Center for Transgender Equality called the Republican proposal “unacceptable” and referred to the Legislature as a “national disgrace.” Cooper urged Democrats not to support the proposal, and in the end it didn’t get enough votes in the Senate. The House adjourned without voting on the repeal, leaving HB2 on the books.

“Today the Legislature had a chance to do the right thing for North Carolina, and they failed,” Governor-elect Cooper told reporters. “I’m disappointed for the people of North Carolina—for the jobs that people won’t have,” he said, referring to the companies that have protested the law by scaling back business in the state. “I’m disappointed that we have yet to remove the stain on the reputation of our great state.” North Carolina has lost millions of dollars in revenue because of the law—companies like PayPal and Deutsche Bank decided not to expand operations in the state, musicians like Bruce Springsteen canceled performances in protest, and the NCAA pulled its championships from the state.

The city of Charlotte did not respond to a request for comment, but in a statement the city council pledged that its “commitment to maintaining and protecting diverse and inclusive communities remains unchanged.” Meanwhile, a majority of North Carolinians remain opposed to HB2, according to Public Policy Polling. The Rev. William J. Barber II, a progressive leader in North Carolina and president of the state’s NAACP, said Thursday he would ask the national NAACP to call for an economic boycott of the state. And though Republicans in the Legislature seem dead set on fighting Cooper, the governor-elect vowed to keep pushing for a full repeal of the law: “This was our best chance,” he said. “It cannot be our last chance.”