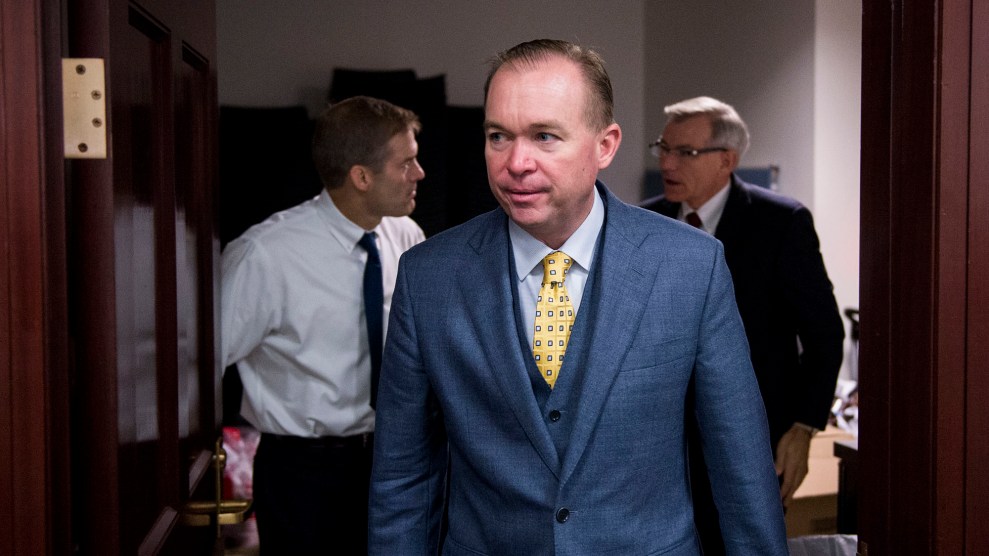 Rep. Mick Mulvaney (R-S.C.) leaves a House Republican Conference meeting in the basement of the US Capitol in September 2015.Bill Clark/CQ Roll Call via AP

Rep. Mick Mulvaney (R-S.C.), the ultra-conservative congressman tapped by Donald Trump to run the Office of Management and Budget, recently accepted a speaking invitation from the notorious John Birch Society, an extreme right-wing group known for peddling outlandish conspiracy theories for more than half a century.

In July, Mulvaney spoke at a dinner held by a local chapter of the group, which has long been exiled from mainstream conservatism. Founded in the 1950s, the outfit promoted a paranoid obsession with communist infiltration. It declared President Dwight Eisenhower “a conscious agent of the communist conspiracy.” It opposed the civil rights movement as a communist plot. Ever since William F. Buckley Jr., the intellectual godfather of modern conservatism, felt compelled to disavow the John Birch Society in the early 1960s, most mainstream conservatives have dismissed the organization as an embarrassment for the right. But the group still exists and continues to emphasize the communist threat. In recent years, it has pushed more modern conspiracy theories: Obamacare finances euthanasia, the United Nations has a sinister scheme for world domination, Moscow is the hidden force behind Islamic terrorism.

But Mulvaney was fine with speaking to the group. His July speech, flagged by the Democratic opposition research group American Bridge, was billed as an address on “the Federal Reserve’s role in bailing out Europe.” According to its website, the John Birch Society believes that the Federal Reserve is unconstitutional and should be abolished and that “the only constitutional money is gold and silver coin.”

After South Carolina Democrats criticized Mulvaney for appearing before the group, he defended the decision, saying, “I regularly speak to groups across the political spectrum because my constituents deserve access to their congressman. I can’t remember ever turning down an opportunity to speak to a group based on the group’s political ideology.”

Mulvaney, who will be tasked with crafting Trump’s budget and ensuring the effectiveness of federal government agencies, will require Senate confirmation before he can assume his post.

Update 3:45 p.m.: Mother Jones obtained audio of Mulvaney’s speech to the John Birch Society chapter. In the speech, Mulvaney blasted the Federal Reserve, saying its actions have “effectively devalued the dollar” and “choke[d] off economic growth.” He praised bitcoin as a currency that is “not manipulatable by any government.” He told his audience, “You all put out some really good stuff and it’s always interesting.” He said he was “looking forward to reading The Shadows of Power,” a 1988 book by James Perloff with the subtitle “The Council on Foreign Relations and the American Decline.” The book advances conspiracy theories about the New York-based think tank, alleging that it advocates “the creation of a world government.” After referring to this book, he told the crowd, “Keep doing it.”