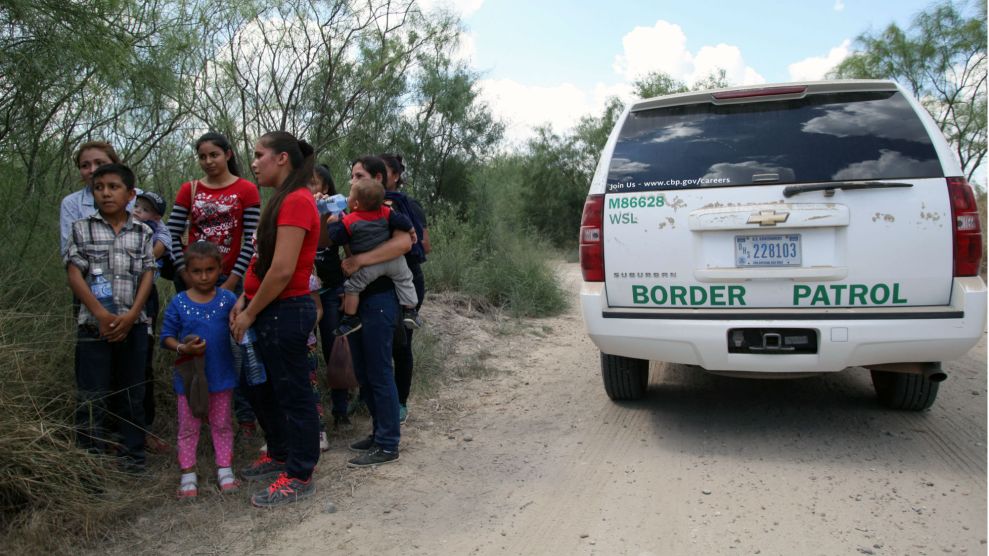 A group of refugee mothers and children wait to be taken into custody by Border Patrol in McAllen, Texas, in 2016.vichinterlang/iStock

Last month, more than 400 women and children were released from an immigrant family detention center in Dilley, Texas. The mass release came three days after a Texas judge denied that center and another in Karnes, Texas, the licenses that would allow them to detain children, which they have been doing for more than two years.

“These are facilities that you wouldn’t put your dog in,” said one lawyer working to close family detention centers.

As Ian Gordon reported for Mother Jones, after the surge in immigration across the United States’ southern border in the summer of 2014, the Obama administration revived the family detention system, in which immigrant women and children are detained, sometimes for months on end, and in some cases for close to a year. Human rights advocates have strongly criticized the policy. As Gordon pointed out, the practice is both expensive and traumatic to the families, many of whom are asylum seekers who fear violence in their home countries.

Here’s a rundown of the basics on how the Texas decision could affect family detention going forward:

So the recent ruling means both of those Texas family detention centers will close, right?

Not necessarily. The release in Dilley was a win for the movement to end family detention, but David Kolko, a Colorado immigration attorney who led the American Immigration Lawyer Association (AILA)’s national task force on family detention, said “the legal question now is to what extent will the government comply [with the judge’s ruling].” The government immediately appealed the ruling, but Kolko pointed out that even if it loses the appeal, it’s not clear what the penalty would be for continuing to house children.

Kolko explained that family detention centers in Dilley and Karnes, as well as the Berks Family Residential Facility in Pennsylvania, violate the Flores Settlement Agreement, which was the result of a decade of litigation over how to treat unaccompanied migrant children. It requires that children be held in licensed child care facilities, which Dilley is not. Berks was given a license that was later revoked, and the judge’s December decision invalidated Karnes’ license. In 2015, a federal judge agreed with Kolko’s assessment, but still the centers remained open and continued to hold children.

How many people are in family detention centers now?

Immigration and Customs Enforcement (ICE) doesn’t release detainment numbers, which makes it difficult to know exactly how many families are currently in family detention. This is compounded by the fact that the numbers are constantly changing as people are released or deported. But Kolko said that, based on estimates from his sources in Dilley, there were still 1,900 women and children in the detention center after the most recent mass release.

According to Customs and Border Protection, 2016 marked the biggest uptick in the arrival of women and children across US borders since 2014, when the initial wave began. Laura Lichter, a former AILA president who is part of a team of lawyers working on family detention centers, explained that when the surge happened in 2014, the Obama administration thought that the women were seeking work and that bringing a child would enable them to stay in the country. According to Lichter, the government thought that detaining and deporting them quickly would discourage others from coming. But actually, she said, most of these women and children were fleeing violence in Mexico and Central America. (ICE was unavailable for comment on this issue.)

“When you start seeing women and unaccompanied children fleeing as migrants, that’s when something really bad is going on,” Lichter said. “That’s the least mobile demographic. You just don’t see it unless it’s life or death.”

As Sara Rathod reported in Mother Jones, numerous studies have found that even short periods of detention affect children’s mental health. Both Kolko and Lichter argued that the term “family detention center” is a misnomer. “These are facilities that you wouldn’t put your dog in,” said Lichter.

How many of the detainees qualify for asylum?

Lichter estimated that the vast majority of the women and children do, but they have a hard time proving it. Immigration law is incredibly complex, and many of the women don’t understand their rights and are vulnerable to pressure from officials who want to remove them quickly.  This effect is compounded by the fact that many of them are suffering from PTSD and are sleep deprived. Lichter said that being detained and not having a lawyer are the two main reasons that refugees are denied asylum. It is for all these reasons that the AILA and other groups are working so hard to make sure these women and children have access to free legal aid.

“The infrastructure has been built in order to detain large numbers of people,” said one expert on family detention centers. “It allows your mind to go to the worst places of what’s possible.”

There are other obstacles preventing the women from communicating their asylum needs, Lichter said. “They might not feel comfortable talking to a male asylum officer about their sexual orientation, or having a child in the room and discussing the fact that the child is the product of a rape.”

So could the recent decision be the beginning of the end of family detention?

It’s certainly made advocates hopeful that family detention centers may soon fall out of favor. But for-profit prison companies won’t give up family detention without a fight. CoreCivic, the private prison company formerly known as CCA that runs the detention center in Dilley, is the largest prison company in the United States. In 2014, as record numbers of Central American immigrants poured across the border, CoreCivic got a sweet deal from the government: a four-year, $1 billion contract to detain those immigrants. The most shocking part of the deal: CoreCivic gets paid no matter how many beds are filled. Even without this deal, Lichter explained, “the profit margin is larger on detaining women and children versus men,” likely because women and children don’t require as many security mechanisms as men.

According to CoreCivic’s own financial reports, the company took away a hefty $71.6 million in revenue from the facility in Dilley alone. As the Washington Post reported, CoreCivic gets 14 percent of its revenue from the facility—it’s the only one of the company’s 75 facilities that holds children. According to its earnings statements, the company experienced a 6 percent growth in revenue during 2015, which it said was “primarily attributable” to the detention center in Dilley.

The American Civil Liberties Union estimates that each detainee in a family detention center costs the government $266 per day, while alternatives such as home visits and check-ins at ICE offices or electronic monitoring devices can cost as little as 17 cents to $17 per day.

And then there’s Trump.

Right. The president-elect has used harsh rhetoric about deportations, threatening to exceed even President Barack Obama’s record removal rates. Kolko said he’s concerned Trump could build on Obama’s family detention practices and detain other groups, such as Muslims: “The infrastructure has been built in order to detain large numbers of people. It allows your mind to go to the worst places of what’s possible.”