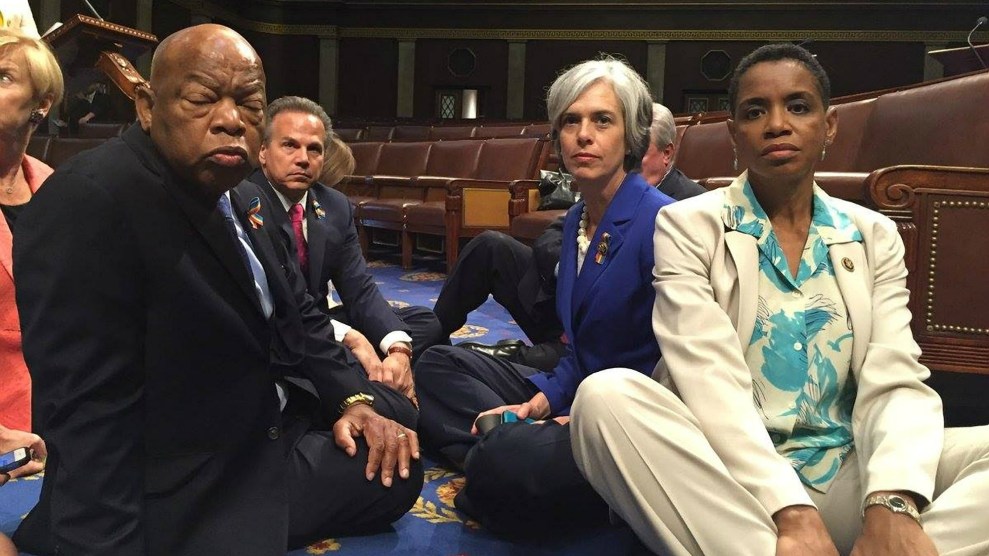 On the first day of the new Congress, House Republicans have created a new rule in which House members could be fined up to $2,500 for live-streaming from the House floor, taking still photos, and recording audio and video. The rule is largely seen as a response to the sit-in Democrats held last year to pressure Republicans to hold a vote on gun control legislation, which they live-streamed from their phones once the official cameras were shut off.

AshLee Strong, a spokesperson for the Republican House leadership, told Mother Jones the move is an effort to “ensure that order and decorum are preserved in the House of Representatives so lawmakers can do the people’s work.”

But good-government advocates are criticizing the measure, saying it’s bad for government transparency. “It could have a chilling effect on some members of Congress who might otherwise be inclined to depict something that’s going on in the floor of the House through electronic means,” says Michael MacLeod-Ball, chief of staff for the American Civil Liberties Union’s Washington Legislative Office. A rule prohibiting the use of taking pictures as well as audio and video recordings on the House floor is already in place, he notes, but the new rule adds teeth to it by way of a fine.

In a passionate speech urging the House to reject the rule, Rep. John Lewis (D-Ga.), a civil rights icon who led the sit-in last summer, asserted that fines won’t keep him from his duty to speak out if the House of Representatives is not reflecting the will of the American people. “We have a right to dissent,” he said. “We have the right to protest for what is right. Regardless of rule or no rule, we cannot and will not be silenced.”

Rep. John Conyers (D-Mich.), Rep. Louise Slaughter (D-N.Y.), Rep. Steve Cohen (D-Tenn.), and Jerrold Nadler (D-N.Y.) described the move as an “unconstitutional gag rule” in a statement released late last month when the fine was first proposed. They called it “unprecedented,” arguing the rule “clearly is intended to undermine the rights of Members in the Minority to freely express their views on the House floor, which is a critical means by which Members communicate to the American public.”

“It is particularly egregious that such a controversial and potentially unlawful change is being implemented in the complete absence of hearings or input from legal experts, let alone the Minority,” they concluded.

Last night, in an apparent response to criticism, Republicans changed their initial proposal in order to allow lawmakers to appeal the fine to the House Ethics Committee. MacLeod-Ball of the ACLU says he’s still not convinced the rule would stand up to legal scrutiny because of the speech-and-debate clause in the Constitution, which protects lawmakers if they’re fulfilling their legislative responsibilities to their constituents. Even if the rule is technically legal, MacLeod-Ball argues lawmakers should get rid of it.

“The restriction is in place and for no apparent good reason,” he says. “It will tend to restrict the amount of information the public gets about the way government operates.”