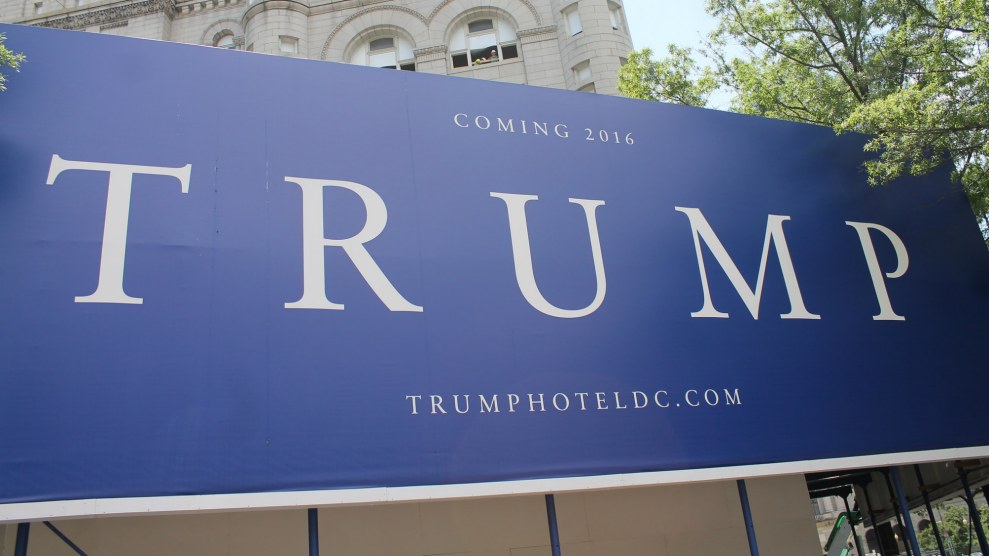 On a recent Tuesday evening, a donor, lobbyist, or foreign diplomat hoping to make inroads with President Donald Trump and his retinue of family members and allies needed only to show up to the lobby bar of the Trump International Hotel in Washington. Seated together on couches near the bar were Donald Trump Jr., the president’s oldest son and now the co-head of the Trump Organization; Brad Parscale, the digital guru for Trump’s presidential campaign who is now running an outside group created to bolster Trump and his agenda; and Nick Ayers, a political consultant and former aide to Vice President Mike Pence who is also working for Trump’s new outside group. With security guards stationed nearby, the men held court, posed for photos with guests, and then headed to the White House to attend the announcement ceremony for Supreme Court nominee Neil Gorsuch.

No president in American history has entered office as conflict-ridden as Trump. It’s almost impossible to keep track of all the ways someone seeking to influence him and his administration could do so without a trace. A donation made through a shell corporation to Trump’s inaugural committee. An undisclosed donation to America First Policies, the new outside group run by Ayers, Parscale, and other ex-Trump aides. A monthly retainer to Avenue Strategies, the consulting firm launched by former Trump aides Corey Lewandowski and Barry Bennett and conveniently located one block from the White House.

But there is a simpler and more direct way to put money in the pocket of the new president and his family: spend money at a Trump hotel or resort. Lots of money. In many ways, the president’s properties—which he refuses to divest or separate himself from in any serious way—serve as ideal conduits for directly influencing and even bribing the Trump administration.

Steven Schooner, a professor of government procurement law at George Washington University and an expert on federal contracting, says an individual, corporation, or foreign government could pay for rooms at Trump hotels, spend lavishly at hotel restaurants, and drop sizeable sums on ballrooms and other event spaces to direct money to the Trump family in the hopes of acquiring influence. “It’s a win-win,” Schooner says. “If you use the space, you’re entertaining people on the president’s property, and if you don’t, you’ve basically just funneled the money to the president and the president’s family.”

At this point, Schooner added, there is no way for anyone outside the Trump Organization and the Trump family to know if any corporations, lobbyists, advocacy groups, businesspeople, foreign governments, or overseas leaders spend money at Trump properties. (Ditto arms traders, sleazy financiers, or any other bad actors.) Noting the recent decision by Trump’s Mar-a-Lago resort to double its initiation fee, Schooner said, “They’re willing to raise the price on anything. What would be an outrageous payment for a social event at a Trump property? $100,000? $200,000? $300,000? And the public will never find [out] about it.” In other words, anyone who wanted the Trumps’ attention and goodwill could rent out space at a Trump hotel or resort for an exorbitant amount—whether they actually used it for a function or not.

Foreign dignitaries have already flocked to Trump’s Washington hotel. A week after the election, nearly 100 foreign diplomats partied at one of the hotel’s ballroom spaces, dubbed the Lincoln Library. Kuwait moved its annual National Day party from the Four Seasons to Trump’s DC hotel. As one Asian diplomat told the Washington Post in November, “Why wouldn’t I stay at his hotel blocks from the White House, so I can tell the new president, ‘I love your new hotel!’? Isn’t it rude to come to his city and say, ‘I am staying at your competitor?'”

A DC-based lobbyist, who asked for anonymity to speak openly about Trump and his properties, told me that he hadn’t personally felt pressure to patronize Trump’s hotel, but “reading between the lines isn’t that tough here.” He went on, “There is a reason that the senior staff hang out in the lobby bar at the hotel. They are seeing who spends time and money there and who books large parties there and large blocks of rooms for delegations.” The lobbyist said he wouldn’t be surprised to see major trade associations such as the US Chamber of Commerce or the National Association of Broadcasters use the hotel to put up visiting colleagues and affiliates. “Point is,” the lobbyist said, “someone is paying attention to the person who orders the $1,000 bottle of wine.”

Sens. Sheldon Whitehouse (D-R.I.) and Tom Udall (D-N.M.) recently sent a letter to Trump requesting information from Mar-a-Lago, the Trump-owned private club in South Florida that will serve as the president’s winter White House. Whitehouse and Udall asked Trump to make public Mar-a-Lago’s private membership list and the names of members and visitors to the club when Trump is there, and to explain how Trump plans to screen members and guests for ties to foreign governments that may seek to influence the president. “Now that you are president, you have an obligation to dispel any suspicions that access to you can be purchased by a private club membership fee,” the senators wrote. (The White House and the Trump Organization did not respond to requests for comment for this story.)

Unlike presidents before him, Trump has refused to divest from his international business holdings, over the objections of myriad ethics experts. Indeed, the Trump Organization is capitalizing on the soaring profile of its founder. Mar-a-Lago upped its initiation fee from $100,000 to $200,000. A Trump Organization executive also suggested that the company plans to expand its hotel offerings, eyeing 26 US metropolitan areas for new projects. (The company currently has properties in five major markets.) At Trump’s January 11 press conference, a lawyer for Trump said the new president would step down from management roles at the Trump Organization and put his assets into a trust controlled by his sons but would not give up his ownership stake. Trump’s lawyer also said Trump would donate the profits—not revenue—from his hotels derived from foreign government sources to the US Treasury, but at present there is no method for confirming that Trump is in fact complying with the agreement.

Outside ethics experts say Trump’s conflicts-of-interest plan does almost nothing to clear up problems that could arise during his presidency. Walter Shaub, the director of the Office of Government Ethics, called the plan “meaningless.” Norm Eisen, who served as an ethics attorney under President Obama, told Mother Jones that Trump’s plan “falls short in every respect.”

Trump still stands to benefit financially from the properties he owns. He recently transferred ownership stake in his Washington hotel into a trust that exists solely “to hold assets for the exclusive benefit of Donald J. Trump,” according to a regulatory filing obtained by ProPublica. So money spent at the Trump International Hotel in Washington still winds up in his own coffers. It doesn’t have to create a profit for Trump to benefit: Hotel revenue can cover overhead and debt payments, such as Trump’s $170 million loan from Deutsche Bank for his DC hotel.

Trump said at his January 11 press conference that he would not discuss business with his sons, but ethics experts say there is no way to police this. Donald Jr. and Eric appear to enjoy ample access to their father, to the White House, and to policymakers in and around the administration. On inauguration weekend, the brothers hobnobbed with their father’s foreign business partners at inaugural parties. The brothers’ social-media accounts show them sitting front row for Gorsuch’s announcement ceremony in the West Wing and later chatting one-on-one with Gorsuch while Pence stood awkwardly behind Donald Jr.

So how much could someone trying to gain goodwill with Trump potentially spend at one of his hotels? Going by the hotel’s advertised rate of $481 a night, a 20-room reservation for 10 days—whether used or not—adds up to $96,400. The hotel’s suites range in price from $1,025 a night (the Ivanka suite) to $25,000 a night (the Trump Townhouse).

The Trump administration has gone out of its way to promote Trump’s Washington hotel. Sean Spicer, then the incoming White House press secretary, plugged the hotel during a press briefing on the day before Trump’s swearing-in. “It’s an absolutely stunning hotel,” Spicer told reporters. “I encourage you to go there if you haven’t been by.” During the official inaugural parade, Trump stopped his motorcade near the hotel, exited his vehicle, and began walking along Pennsylvania Avenue, where he and his family waved to fans. Since Trump took office, his Washington hotel has become a hub and gathering spot for Trump supporters, acolytes, and—yes—family members.