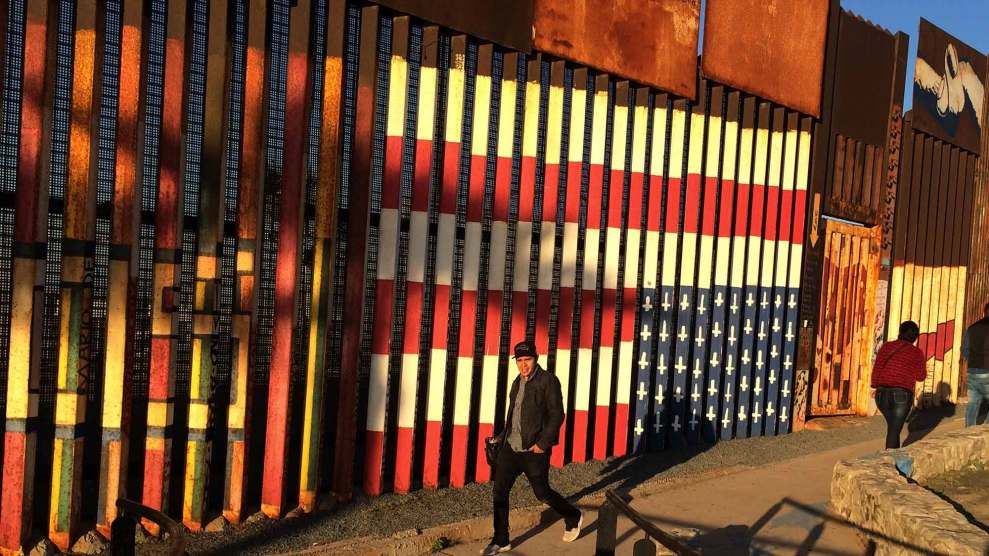 Early Thursday, immigration attorneys in Los Angeles started getting calls from clients across the city. Some callers reported being picked up by Immigration and Customs Enforcement (ICE) agents at their homes. Others were caught at their workplaces, including one man detained at a Target store. The first round of Trump-era deportation sweeps had begun.

The news quickly filtered back to immigrant rights activists, who confirmed the detentions and alerted their networks. According to Angelica Salas, the executive director of the Coalition for Humane Immigrant Rights of Los Angeles (CHIRLA), as many as 134 immigrants were detained in the sweep. Based on her conversations with lawyers, many of those detained had outstanding orders for deportation—and some were sent back to Mexico as early as Thursday afternoon.

In a Friday afternoon press release, ICE said 160 immigrants were arrested during what it called a “five-day targeted enforcement operation” in Southern California that was “aimed at at-large criminal aliens, illegal re-entrants, and immigration fugitives.” Of the 160, ICE claimed that 150 had criminal histories, and that 5 of the remaining 10 had final orders of removal or had been previously deported. While the release said “many of the arrestees had prior felony convictions for serious or violent offenses,” ICE did not give a full breakdown of those convictions.

Earlier Friday, an ICE spokeswoman told Mother Jones that “enforcement surges have been part of our operational play book for many years.” The subsequent press release echoed that line: “The focus was no different than the routine, targeted arrests carried out by ICE’s Fugitive Operations Teams on a daily basis.”

The sweep was the second high-profile ICE action in two days. On Wednesday night, immigration agents in Phoenix found themselves swarmed by protesters when they attempted to deport Guadalupe García de Rayos, a 35-year-old Mexican immigrant with two teenage children who are American citizens. García de Rayos had been caught using a fake Social Security number during an ICE workplace raid in 2008.

García de Rayos’ deportation sent shock waves through the immigrant rights community and dominated Spanish-language media on Thursday. Ever since the 2008 raid, she had checked in annually with ICE to review her case—brief meetings that always resulted in her walking free, even though she had been convicted of a felony and later had a deportation order against her. This partly reflected the Obama administration’s emphasis on deporting serious criminal offenders. But her deportation to Nogales, Mexico, signals that the Trump administration plans to follow through with its plans to remove all undocumented immigrants who’ve committed “acts that constitute a chargeable offense”—which, as Vox‘s Dara Lind has pointed out, could include everything from entering the country illegally to driving without a license. (In a statement to reporters Thursday, ICE said it will “focus on identifying and removing individuals with felony convictions who have final orders of removal.”)

Indeed, social media was abuzz Friday with rumors of deportation raids throughout the country. On a conference call late in the day, Dave Marin, ICE’s LA field office director for enforcement and removal operations, confirmed that there were also operations in Atlanta, Chicago, and New York during the week. And Rep. Joaquin Castro (D-Texas) tweeted Friday afternoon about additional ICE activity in South and Central Texas:

I’m concerned about the ICE raids in Texas. My statement: pic.twitter.com/SeeDSwAmyM

“A lot of things have changed since January 20,” says CHIRLA’s Salas. She notes that during the Obama years, ICE would typically give groups like CHIRLA basic information such as names and the number of people detained following any large sweep or workplace raid. But Salas says she finds it troubling that following Thursday’s actions, there was little to no communication with the agency. “It’s important that we don’t get used to the idea that they don’t have to give out this information,” she says.

CHIRLA is currently focusing on educating immigrant communities on civil and constitutional rights. According to a new report from the Pew Research Center, greater Los Angeles is home to 1 million undocumented immigrants—second only to the New York City area, which is home to 1.15 million. On Friday, the group ran hourly know-your-rights workshops, and it’s also holding legal clinics where immigrants can get advice. Similar efforts have been happening nationwide: Earlier this week, for example, public school educators in Austin, Texas, handed out flyers to students in English and Spanish about what to do in an encounter with immigration officials.

“We have to set the tone,” Salas says, “that this is not acceptable.”