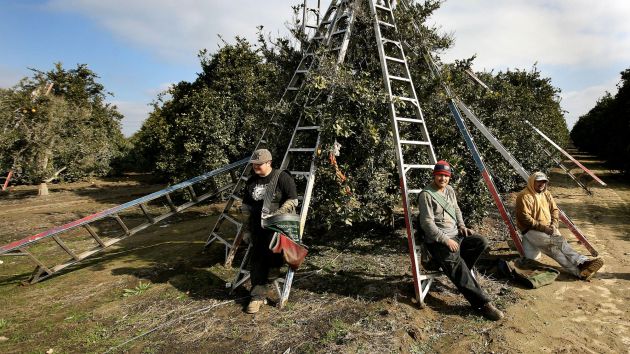 At Porterville Citrus, an orange-harvesting and -packing operation in California’s Tulare Valley, CEO Jim Phillips has been growing increasingly nervous over the past five years. He’s found it harder and harder to marshal enough local workers to pick his oranges on time—up to 20 percent of the fruit has been left to rot on the trees. This year he decided not to take any chances. He hired a contractor to supply his company with 120 Mexican guestworkers under the H-2A farmworker visa program. “It is a little bit more expensive,” he says, “but the quality and reliability is worth something to us. We know we can get the product harvested.”

“The guestworkers tend not to want to challenge unfair or illegal conduct—and there are a lot of violations.”

Only about 4 percent of America’s 2.5 million farmworkers in 2015 came in on temporary visas—most of the rest were undocumented—but these numbers are poised to skyrocket if President Donald Trump carries out his promises to build a border wall and deport millions of undocumented immigrants. Trump has signaled that he wants to cut red tape in the H-2A program, but farmworkers’ advocates fear a loosening of the rules could make guestworkers even more vulnerable to potential labor abuses than they already are. “The H-2 programs are inherently problematic,” says Bruce Goldstein, president of a nonprofit called Farmworker Justice, because the workers “tend not to want to challenge unfair or illegal conduct—and there are a lot of violations.”

Despite campaigning on the unsettled claim that immigrants depress wages and compete with American citizens for jobs, Trump has embraced the use of temporary foreign workers. He has used low-wage guestworkers himself at Mar-a-Lago, and his son Eric petitioned the Labor Department in recent months to import 29 H-2A workers to tend his Virginia winery. Trump’s transition teams for the departments of labor and agriculture are stacked with members of trade groups and right-wing think tanks who support guestworker programs.

A draft executive order leaked to the press last month called for “efficient processing” of H-2A visas. The order “does suggest an interest in modernizing the H-2A program, which we would welcome,” says Jason Resnick, a vice president of Western Growers, whose CEO serves on Trump’s agricultural advisory board. “We think the administration is well aware of the importance of the H-2A program to agriculture, so we are optimistic that there will be proposals forthcoming to make the program more efficient and streamlined and less costly and burdensome.”

The number of H-2A visas has roughly doubled since 2011 as it stands, driven by what farmers say are chronic labor shortages. The children of aging farmhands gravitate toward higher-paying work, and stricter border enforcement and an improving Mexican economy mean fewer immigrant workers are available. Some farmers have turned to mechanization to hold down labor costs, but harvesting California’s fresh fruits and vegetables often requires a human touch. Western Growers says the crews of its farmer members are 20 percent understaffed.

Before hiring guestworkers, farmers have to show that they can’t find enough Americans to do the work at the “adverse effect wage,” which is basically the average wage in a given state for a given type of farm work. “US workers are not applying to take those H-2A jobs,” says Western Growers’ Resnick. “The ones that do generally don’t last a week, let alone the whole season.”

Faced with an acute labor shortage, one California garlic farmer raised wages 18 percent—and ended up with a waiting list.

Some labor advocates say the shortages are a product of inferior wages. They point to Christopher Ranch, a 4,000-acre farm in Gilroy, California, which at the end of last year was short 50 workers it needed to peel and package garlic. In January, the company announced that it would raise its farmhand wage from $11 to $13 an hour—an 18 percent increase—and boost it to $15 in 2018. Soon it had a waitlist of 150 people. “I knew [the pay raise] would help,” ranch VP Ken Christopher told the Los Angeles Times, “but I had no idea it would solve our labor problem.”

But farmers insist they can’t pay wages high enough to attract nonimmigrants. Labor economists tend to agree: “I don’t think we will ever get US workers in the field, period,” says P.L. Martin, a professor emeritus of agriculture and resource economics at the University of California-Davis. In America, he says, labor makes up about 40 percent of the cost of producing fresh fruits and vegetables, and that puts the farmers at a disadvantage to foreign rivals paying lower wages. But in less competitive sectors—fresh-picked strawberries, fresh lettuce, etc.—farmers could afford to pay more, according to a 2010 USDA report Martin co-authored.

In any case, H-2A workers are typically viewed as a last resort by American farmers, who must pay the cost of transporting and housing them. They cannot easily adjust an H-2A workforce according to a farm’s day-to-day needs—and they can’t employ any guestworker for more than three years at a time. There is one advantage, though: “We really can control the quality of the harvesting even better than we can with our local farm labor contractors,” says Phillips of Porterville Citrus. “Nobody is being overbearing, but if [the workers] are not productive, they can be sent back. So their incentive is to do a good job.”

Which is okay so long as the boss is fair. But the imbalance of power can also enable horrific abuses. A 2015 investigation by BuzzFeed found that thousands of H-2 visa holders had been badly exploited: deprived of fair pay, imprisoned, starved, beaten, raped, and threatened with deportation if they complained. And guestworkers seldom report labor abuses. When they do, advocates say, they lack the resources to fight for restitution. Former Rep. Charles Rangel once attacked the H-2 program as “the closest thing I’ve ever seen to slavery.”

Expanding the H-2 program is “better than just allowing employers to hire people who come across the border illegally.”

The United States last experimented with large-scale use of guestworkers during World War II, when Mexican braceros labored on American farms. Approximately 200,000 braceros entered the United States each year between 1948 and 1964, according to historian Mae M. Ngai. On paper, the program offered legal protections for workers, just as the H-2A program does today, but abuses were common—a study by the Pan American Union noted that “workers who complain are regarded as agitators and shipped back to Mexico.”

Any plan to bring in more guestworkers will likely face resistance from left-leaning labor groups and right-wing nativists alike. Breitbart News has written critically about the use of H-2As, as well as H-2B visas for nonagricultural workers. As a senator, Attorney General Jeff Sessions voted against a bill to loosen restrictions on the H-2A program.

Yet guestworkers do have a certain appeal on the right. “You are probably going to see more reliance on it, which is better than just allowing employers to hire people who come across the border illegally,” says Ira Mehlman, media director for a group called Federation for American Immigration Reform. “It eliminates some of the exploitation that comes just with the widespread hiring of illegal aliens.”

Worker advocates were less sanguine. Employers control the guestworkers’ visas, making it very difficult for the workers to switch jobs. And while undocumented immigrants tend to migrate to places where they have friends and family, guestworkers often live in remote areas without support networks. “It should be that they are significantly better protected” than undocumented immigrants “and have access to better jobs, and that’s what the migrants come in expecting,” says Cathleen Caron, the founder of a farmworker advocacy group called Justice in Motion. But “in the end, everybody gets exploited equally.”