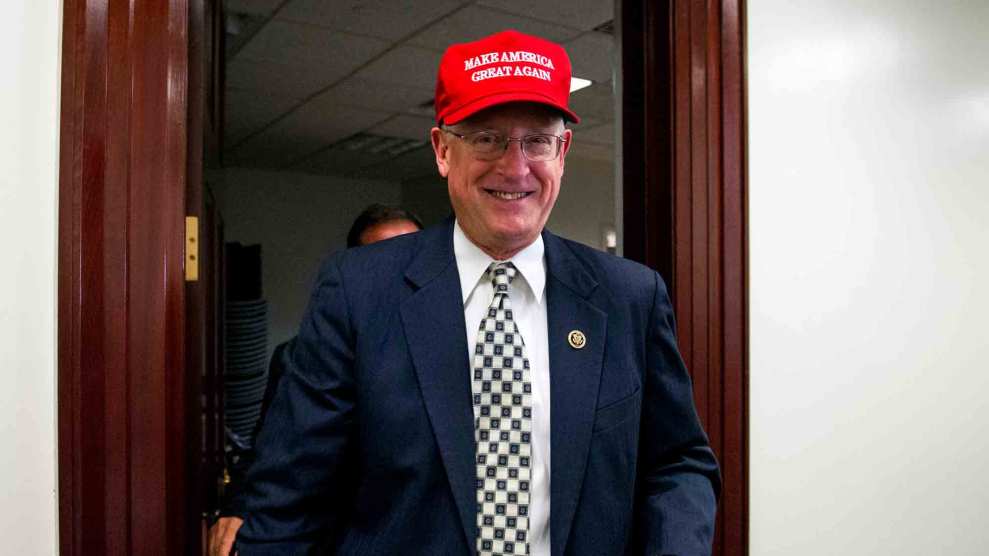 On Thursday morning, the inevitable happened: Rep. Devin Nunes (R-Calif.), the chairman of the House intelligence committee, announced he was yielding the reins on his panel’s derailed investigation into Russia’s meddling in the 2016 presidential election. Nunes claims the reason for his retreat is that the House ethics committee is investigating whether he publicly revealed classified information—a charge he insists is “baseless.” Whatever happens with this ethics inquiry, his departure does not guarantee the investigation will fare any better than it has.

In his statement, Nunes curiously said nothing about Vladimir Putin’s secret political attack on the United States. Nor did he mention the question of contacts between Trump associates and Moscow. He only discussed one aspect of the committee’s probe: the leaking of classified information (mainly about Michael Flynn, who was fired from the national security adviser post after news reports showed he had lied about his conversations with the Russian ambassador to the United States during the transition). “The charges…are being leveled just as the American people are beginning to learn the truth about the improper unmasking of the identities of US citizens and other abuses of power,” Nunes declared. So even as he said bye-bye to the probe, the congressman—who served on the Trump transition team and who delegitimized himself while trying to provide cover to President Donald Trump for his fact-free charge that Barack Obama had wiretapped him—was still promoting Trump’s distraction of choice: The big story is what happened when Trump and his team were possibly picked up by “incidental” intelligence collection, not Putin’s attempt to subvert an American election or the FBI’s investigation of Trump associates for possibly coordinating with Russia.

And the committee members Nunes designated as his heirs have been champions of the same diversionary tactic.

Nunes, who is retaining his post of committee chairman, assigned the task of running the Russia investigation to Rep. Mike Conaway (R-Texas). He also noted that Rep. Trey Gowdy (R-S.C.) and Rep. Tom Rooney (R-Fla.) will assist Conaway. At the committee’s first hearing for its Russia probe—before Nunes ran the investigation into a ditch—his three designees, as they questioned FBI chief James Comey and National Security Agency head Mike Rogers, focused on the narrow issue of leaks and unmasking. (“Unmasking” is the term of art for when a senior US official cleared to handle top-secret reports based on intelligence intercepts of foreign targets requests an intelligence agency to disclose to him or her the identity of a US citizen referenced in a report.) Or they asked questions designed to raise doubts about the intelligence community’s assessment that Putin meddled in the election to assist Trump. That is, they stuck to the GOP’s political script.

Moreover, in early January, Conaway dismissed the issue of Russian involvement in the campaign with a wacky comparison. Speaking to a Dallas newspaper, he compared the Russian hacking-and-leaking assault to standard campaign moves: “Harry Reid and the Democrats brought in Mexican soap opera stars, singers and entertainers who had immense influence in those communities into Las Vegas, to entertain, get out the vote and so forth. Those are foreign actors, foreign people, influencing the vote in Nevada. You don’t hear the Democrats screaming and saying one word about that.” As the Dallas Morning News reported, “Asked whether he considers that on par with Russian cyber-intrusions that aimed to damage Hillary Clinton‘s campaign, Conaway said: ‘Sure it is, it’s foreign influence. If we’re worried about foreign influence, let’s have the whole story.'”

This attitude was on full display during the hearing with Comey and Rogers—at which Comey declared the FBI had no evidence to support Trump’s Obama-wiretapped-me claim and revealed the FBI had been investigating Trump-Russia contacts since July. When Conaway was granted time for questioning, he dwelled on when and why the FBI and the NSA had reached the conclusion that the Russian operation was designed to help Trump. Conaway tried to make an issue out of the fact that the FBI hit this conclusion with more certainty a few weeks before the NSA did late last year. Comey had to point out, “To be clear, Mr. Conaway, we all agreed with that judgment.” And Rogers echoed him.

Conaway’s intent was clear: to attempt to show this damaging-to-Trump assessment was still iffy. This led him into a bizarre exchange with Comey over rooting for college football teams and whether a person can cheer for one team to lose and not really desire the other team to win. (Conaway referenced his wife’s favorite team, the Red Raiders of Texas Tech.) Comey noted that “logically, when [Putin] wanted [Hillary Clinton] to lose,” he wanted Trump to win. Conaway then tried to discredit a Washington Post story by noting that the anonymous sources who provided the newspaper information about the US intelligence community’s assessment of the Russian operation (before that evaluation was made public) had probably broken the law. It was not obvious what he was driving at. But Conaway had not bothered to express any outrage over the Russian intervention or to encourage the FBI’s ongoing investigations. He was in Trump-damage-control mode.

Rooney used his grilling time to pose to Rogers a long and detailed series of questions about incidental collection and unmasking. These are not unimportant subjects. But they have nothing to do with how Putin and Russian intelligence intervened in the election. (Rogers noted that only 20 senior-ranked officials at the NSA, including himself, are authorized to approve unmasking requests.) Then came the money shot. Rooney asked, “If the NSA obtained the communication of General Flynn while he was communicating with the surveillance target legally, would you please explain how General Flynn’s identity could be unmasked based on the exceptions that we discussed?” So this was all about targeting those current or past US officials who had leaked information on Flynn’s conversation with the Russian ambassador. Rooney was more concerned about the leaking than Flynn’s deceptions and back-channel communications (for which Flynn was fired). Rogers replied, “I’m not going to discuss even hypotheticals about individuals, I’m sorry.”

Nevertheless, Rooney decried the “serious crime” that had apparently been committed via a presumed act of unmasking. He noted he was worried that the intelligence community had broken a “sacred trust” with the American people. (There was not a word about Flynn violating any trust.) He did not once address the Russian intervention.

When Rooney was done, Gowdy picked up this line of questioning. Gowdy is best known for running the House special committee on Benghazi that went on endlessly—after other House committees had scrutinized the matter and blown apart the various anti-Clinton conspiracy theories of the right—and was marred by partisan moves and, yes, leaks from the GOP side of the committee. (Gowdy also declared during the campaign that he believed Clinton should be prosecuted for how she handled her official email when she was secretary of state.) Citing several newspaper stories about Flynn’s calls with the Russian ambassador—which referred to classified intercepts that had captured these communications—Gowdy said to Comey, “I thought it was against the law to disseminate classified information. Is it?” Comey replied, “Yes, sir. It’s a serious crime. I’m not going to comment on those particular articles because I don’t want to, in any circumstance, compound a criminal act by confirming that it was classified information, but in general, yes, it’s a serious crime.”

Gowdy subsequently followed up with this question: “Is there an exception in the law for reporters who want to break a story?” Comey answered, “Well that’s a harder question as to whether a reporter incurs criminal liability by publishing classified information and one probably beyond my ken.” But Gowdy suggested that a reporter could be prosecuted for publishing a story containing classified information. “You’re not aware of an exception in the current dissemination of [the] classified information statute that carves out an exception for reporters?” he asked the FBI chief. No, Comey said: “I’m not aware of anything carved out in the statute. I don’t think a reporter’s been prosecuted certainly in my lifetime, though.”

Gowdy did not ask anything related to how the Kremlin had targeted a political party and presidential campaign to subvert an election. Instead, he fixated on leaks and locking up journalists who receive and report classified secrets. He pressed Comey to investigate the Flynn leak, and he ticked off a list of Obama officials who might have had access to unmasked names—James Clapper, John Brennan, Susan Rice, Loretta Lynch, Sally Yates—as if to suggest one or more of them deserved to be investigated for the Flynn leak.

Toward the end of the hearing, Gowdy did speak one sentence about the FBI’s Russia investigation. He told Comey, “I want you to go find every single witness who may have information about interference, influence, motive, our response, collusion, coordination, whatever your jurisdiction is, wherever the facts may take you. Though the heavens may fall, go do your jobs because nature abhors a vacuum.” But Gowdy then cautioned people not to confuse “evidence” with “facts” and to be wary of hearsay. This seemed to be an indirect way of questioning media reporting regarding the Russian intervention in the election and the contacts between Trump associates and Russia. In any event, Gowdy had tried to turn the hearing into an inquiry about the Flynn leak and the once-obscure subject of unmasking—which matched the agenda of Trump defenders.

Acting in a partisan and puzzling manner, Nunes made a hash of the House intelligence committee’s investigation of the Trump-Russia scandal. After his botched stunt, his credibility was shot. Stepping aside was the correct action. Yet he has placed this important exercise in the hands of men who have indicated they are not fully concerned with the main issues, which, of course, are rather inconvenient for their party and its president. Conaway, Rooney, and Gowdy have not yet demonstrated they can mount an independent and vigorous investigation on this politically sensitive terrain. Nunes may be gone, but the challenges facing the committee remain.