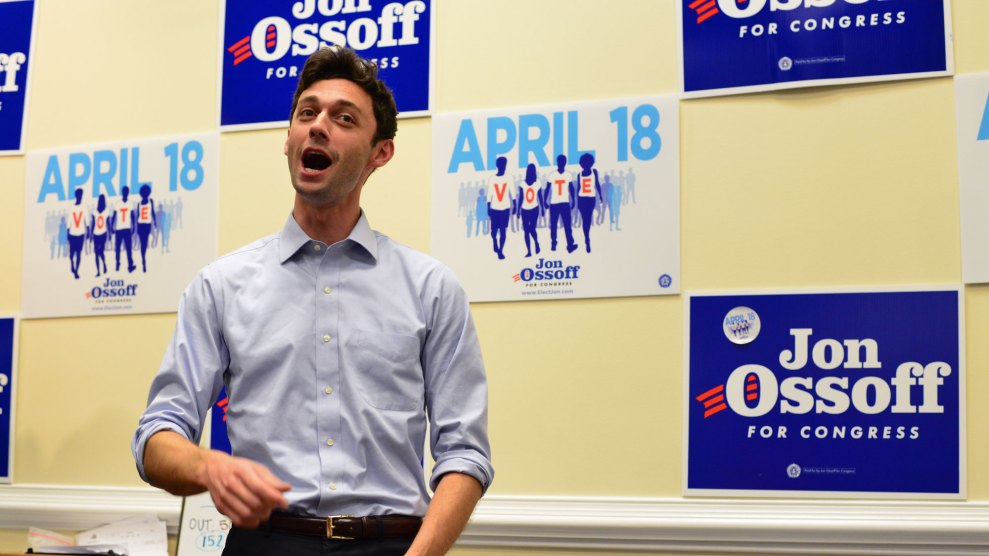 Democrat Jon Ossoff came up just short of an outright victory in Tuesday’s special election for the Georgia congressional seat vacated by Health and Human Services Secretary Tom Price. Instead, after finishing a few points shy of the 50 percent threshold in a 20-candidate field, he’ll face off against Republican Karen Handel on June 20.

The race was the third special congressional election since November, but the first in a district considered even remotely competitive. Although the 6th District was considered safely Republican for decades and Price never faced serious opposition, Hillary Clinton nearly won the district in November. Ossoff raised more than $10 million—more in a single quarter than a House candidate in history—and turned the race into a magnet for anti-Trump activism, even as the candidates in the race stayed largely quiet on the subject.

Special elections are screwy barometers of the national mood, which is unfortunate because their isolation makes it much more likely they’ll be interpreted as such. Democrats won their first seven special elections of the Obama era ahead of the disastrous 2010 wave, including in a pair of soon-to-be red seats in upstate New York. Moral victories are lame, but for a party that’s aiming to expand its map in 2018 and make Georgia competitive statewide sooner rather than later, there are greater tragedies than having to spend another month organizing the 6th District.

In the meantime, we’ll have another special election to fixate on. Montanans will pick the successor to Interior Secretary Ryan Zinke on May 25. Hold onto your butts.