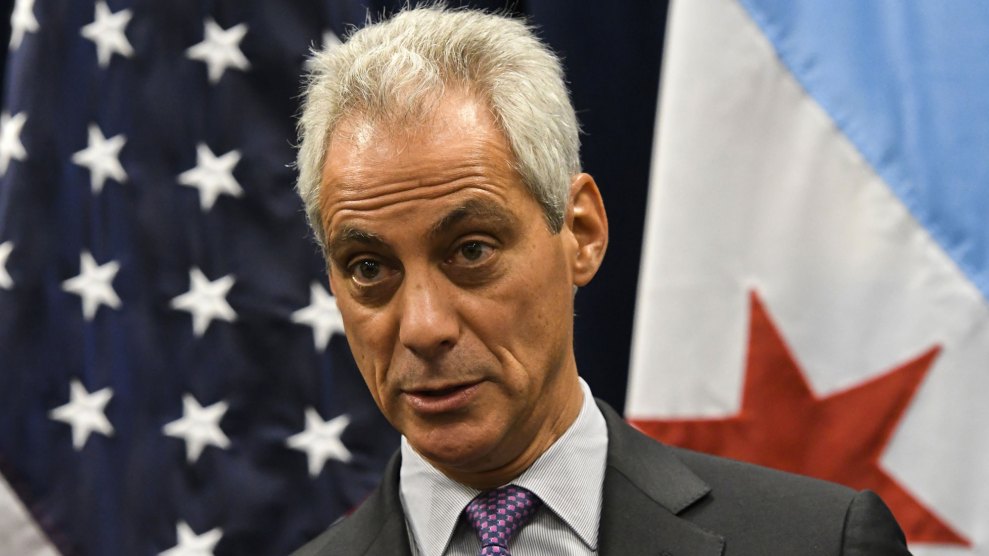 Chicago Mayor Rahm Emanuel got a lot of attention two weeks ago when he announced a new graduation requirement for high school seniors: They would have to have a plan. Starting with the class of 2020, Chicago Public School students will be required to show proof of their next step after graduation—such as a college acceptance letter or a job offer. It may seem like a good motivational tool, but in a city where access to resources depends on your neighborhood, and where budget cuts have strained existing programs, some observers consider the mayor’s proposal “deeply insulting.”

“It spits in the face of everything we know about CPS right now.”

So says Stacy Davis Gates, the political and legislative director for the Chicago Teacher’s Union, who adds, “It spits in the face of everything we know about CPS right now.”

Emanuel announced the proposal (“Learn. Plan. Succeed: A Degree For Life”) in early April. Students will have to show a school counselor that they have a post-secondary plan. It needn’t be college or a job: A kid also can enlist in the military or find an apprenticeship or a “gap-year” program, among other options. There are exceptions for students facing special circumstances, including incarceration. Emanuel wants to “make 14th grade universal,” as he told CBS. Graduates of the school system, meanwhile, are automatically eligible to attend the City Colleges of Chicago.

The mayor first explored the idea in conversations with Arne Duncan, who served as secretary of education under President Barack Obama, and who once ran the Chicago schools. The Chicago Board of Education is expected to greenlight “Learn. Plan. Succeed” at its next meeting.

On its face, the program reflects the goals of teachers and principals: to prepare kids for a bright future. Janice Jackson, the chief education officer for the Chicago schools, compares Emanuel’s proposal to others that faced opposition at first, such as mandatory ACT testing and the requirement that kids complete a program of community service in order to graduate.

According to internal reports from local high schools, about 60 percent of students already graduate with a plan. Emanuel is intent on ensuring that half of all public school students end up with a college or career credential (from internships, work experience, etc.) by 2019—up from around 40 percent today. Under his new proposal, the school district will spend $1 million to make sure each school has at least one counselor well trained in college advising. Additional specialists will be hired to work externally with colleges and employers, Jackson says.

“I think that the 40 percent of kids who don’t have a post-secondary plan will have one, and that they’ll benefit as a result.”

Emanuel’s critics, however, doubt that $1 million is enough. They also express frustration that the city isn’t doing more to tackle systemic problems, including slashed budgets, school closures, and overcrowded classrooms—city schools may even end classes three weeks early this year due to a lack of funding. The Reverend Jesse Jackson joined the dissenters this week, writing in the Chicago Sun-Times that “a majority of young black high school graduates are looking for work and can’t find it. The mayor’s plan does nothing to address this grim reality.”

The same morning Emanuel introduced “Learn. Plan. Succeed,” he also announced that the city may close multiple schools on the South Side and build one new high school there at a cost of $75 million. (A school district spokeswoman said on Thursday that no final decisions have been made.) Gates, the teachers’ union rep, claims this is in line with Emanuel’s “lead by press release” style: using a flashy proposal to steer the media away from the district’s persistent troubles.

According to research from the Chicago Urban League, more than half of Chicago public school students are in majority-black, majority-poor schools. The district has a 37 percent achievement gap in grade-level proficiency between its white and black students.

The district’s Janice Jackson says the funds generated for the new program should allow all schools to meet the new requirement by 2020. She acknowledges the resource disparities between richer and poorer schools, but “now that it’s a requirement, I think that that 40 percent of kids who don’t have a post-secondary plan will have one, and they’ll benefit as a result.”

Gates begs to differ. She says the counselor-to-student ratio varies widely across the city, and that 63 percent of high schools have counselors handling more kids than recommended. “As a district, we would fail miserably in meeting this harebrained idea,” she told me. “There are not enough resources to support something like this. Remember, getting a diploma is not a senior year activity. Getting a diploma and getting ‘college ready’ is something that starts in early childhood.”

“Is this going to be a compliance issue, or are we going to make sure that kids have a real plan?”

Chicago’s budget woes largely come from the top. The district had to cut $46 million from its budget earlier this year, meaning less money for textbooks, afterschool programs, and field trips. Emanuel’s handling of the schools has been repeatedly criticized. Teachers called a 2012 strike to seek better benefits, proper job evaluations, and additional training. In 2013, the mayor decided to close 50 schools, mostly in black and Latino communities.

Sheryl Bond, who works as a counselor at George Washington High School, says she supports the goals of the the new policy, but considering that counselors are already trying to help kids plan their futures, and since it’s easy enough to put a “plan” on paper, she’s skeptical whether the “plan” requirement will change anything. “Is this going to be a compliance issue,” she asks, “or are we going to make sure that kids have a real plan?”

Kristy Brooks, a Chicago elementary school counselor, also doesn’t see how giving kids another hoop to jump through will help. “The only thing standing in the way of our kids having a bright future is that nobody’s forcing them to have some sort of plan? I don’t think so,” Brooks says. “If a kid makes it far enough to graduate high school, they’re doing it for a reason.”