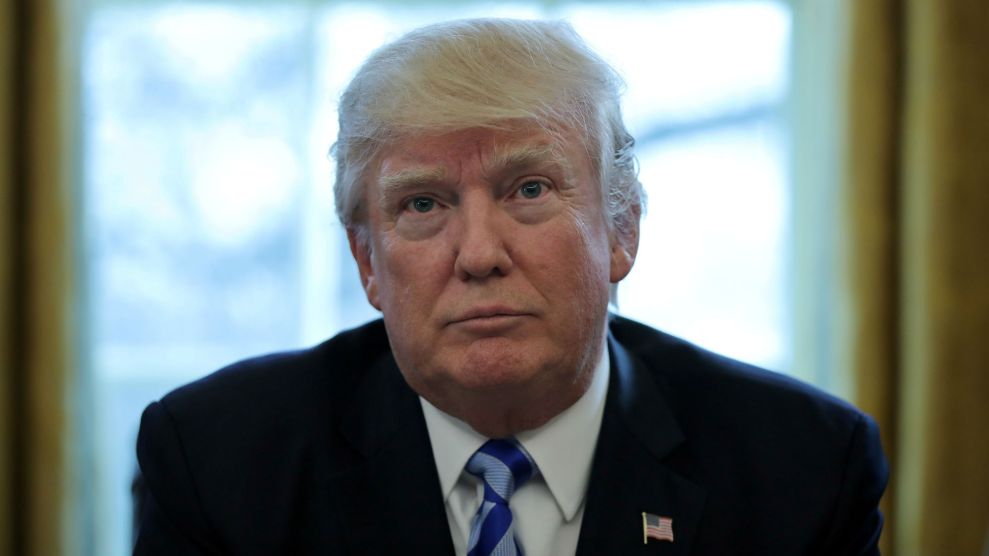 When President Donald Trump placed his businesses in a trust upon entering the White House, he put his sons in charge and claimed to distance himself from his sprawling empire. “I hope at the end of eight years I’ll come back and say, ‘Oh you did a good job,'” Trump said at a January 11 press conference. Trump’s lawyer explained that the president “was completely isolating himself from his business interests.”

The setup has long been slammed as insufficient, far short of the full divestment that many ethics experts say is needed to avoid conflicts of interest. A small phrase buried deep in a set of recently released letters between the Trump Organization and the government shows just how little separation there actually is.

Trump can draw money from his more than 400 businesses, at any time, without disclosing it.

The previously unreported changes to a trust document, signed on February 10, stipulate that it “shall distribute net income or principal to Donald J. Trump at his request” or whenever his son and longtime attorney “deem appropriate.” That can include everything from profits to the underlying assets, such as the businesses themselves.

Trump can draw money from his more than 400 businesses, at any time, without disclosing it.

There is nothing requiring Trump to disclose when he takes profits from the trust, which could go directly into his bank or brokerage account. That’s because both the trust and Trump Organization are privately held. The only people who know the details of the Trump trust’s finances are its trustees, Trump’s son Donald Jr., and Allen Weisselberg, the company’s chief financial officer. Trump’s other son, Eric, has been listed as an adviser to the trust, according to this revised document.

The Trump Organization did not answer detailed questions about the trust. In a statement to ProPublica about the companies’ corporate structures, a Trump Organization spokeswoman, Amanda Miller, said, “President Trump believed it was important to create multiple layers of approval for major actions and key business decision” (Sic. Read the full statement.)

There is a chance Trump will list his profits in his next federal financial disclosure, in May 2018, but the form doesn’t require it. The surest way to see what profits Trump is taking would be the release of his tax returns—which hasn’t happened. Income has to be reported to the IRS, whether it comes from a trust or someplace else.

“For tax purposes, it’s as if the trust doesn’t exist at all,” said Steven Rosenthal, a senior fellow at the Urban-Brookings Tax Policy Center. “It’s just an entity on paper, nothing more.”

It’s not clear why Trump added the language to the trust document. His original trust document, which ProPublica obtained in January, designated Trump as the “exclusive beneficiary.” It did not include any restrictions on when Trump could get the money.

Taking profits regularly could benefit Trump in a variety of ways. It would give the president yet more details on the ongoing finances of his businesses. Trump’s son Eric recently told Forbes he plans to update his father on the company regularly, though the revised trust document states that the trustees “shall not provide any report to Donald J. Trump on the holdings and sources of income of the Trust.”

Trump could also simply find the income helpful, even as president. The trust document shows that Trump has “broad rights to the trust principal and income to support him as necessary,” Tansill said.

With Trump’s hundreds of other businesses, including golf courses, hotels and branding deals, profits from each go to a holding company and eventually into Trump’s trust.

The General Services Administration released the document last week when it approved the Trump Organization’s plan to address conflicts involving the Trump International Hotel in DC. (The GSA, which handles procurement for the government, owns the land and Trump has a 60-year lease for the building.) In response to criticism about Trump being, in effect, both tenant and landlord, he agreed to not take any profits from the hotel while in office.

Profits will go into a separate company account, which can only be used for hotel upkeep, improvements or debt payments. Watchdog groups have derided that deal as insufficient, noting that pouring profits back into the hotel will make it more valuable in the long term.

With Trump’s hundreds of other businesses, including golf courses, hotels and branding deals, profits from each go to a holding company and eventually into Trump’s trust. Other corporate documents we obtained, reflecting changes made after Trump’s January 20 inauguration, show how money flows from a golf club outside Philadelphia to the president’s trust.

There soon could be many more Trump family businesses.

The Trump Organization has recently touted plans to open hotels across the country, including a second one in Washington, DC. “It’s full steam ahead,” Trump Hotel CEO Eric Danziger said recently. “It’s in the Trump boys’ DNA.”