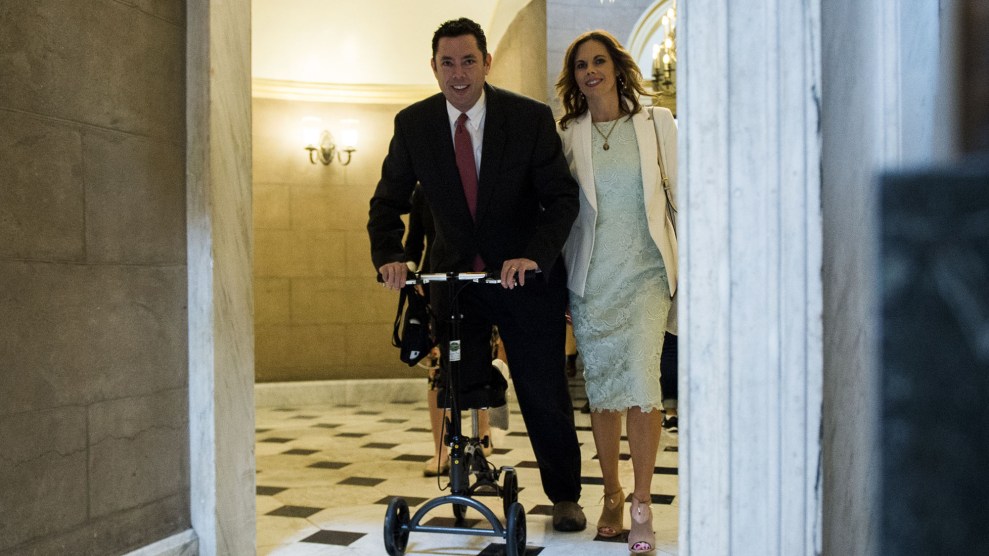 When Republican lawmakers face criticism over their plan to allow states to dismantle protections for people with preexisting conditions, they have a pretty standard response. Their Obamacare repeal bill, they insist, would only allow insurers to jack up prices on sick people if those people haven’t maintained continuous health coverage. “For individuals with preexisting conditions, once you are in the system, every proposal that I’ve heard so far says you stay in the system,” Sen. Mike Rounds (R-S.D.) told NPR Thursday. “And if you do have a serious illness, you can’t run out of coverage.”

But we now know that isn’t really accurate. As Mother Jones‘ Kevin Drum points out, Wednesday’s Congressional Budget Office analysis of the bill suggests that anyone with a preexisting medical condition—even people who already have health insurance—could face steep premium hikes.

“The nongroup markets in those states would become unstable for people with higher-than-average expected health care costs.”

Part of what Republicans are saying is technically true: The bill does, in fact, bar insurance companies from singling out individuals for price hikes if they have maintained continuous coverage. But the CBO notes that insurers would have—and likely would use—a workaround that would effectively jack up rates on every sick person they cover in the non-group market.

The exact mechanism is a bit complicated. In essence, insurance companies would entice healthy people out of the community-rated market—which mandates that everyone pay the same rate, with no differences based on health status—by offering plans with cheaper premiums. Those new plans would be subject to underwriting, which means that they’d likely be unaffordable for people with preexisting conditions. Sick people would remain in the community-rate plan, where prices would skyrocket. That, in turn, would drive more healthy folks away from the community-rated plans, creating a downward spiral.

The CBO is surprisingly frank about the effects the GOP bill would have on people preexisting conditions. The report predicts that about 15 percent of Americans will live in a state that obtains a waiver to end the ban against price discrimination. According to the report, “The nongroup markets in those states would become unstable for people with higher-than-average expected health care costs.” Premiums would become far more expensive, and possibly so expensive that people with preexisting conditions would essentially be excluded entirely from the market.

According to the Kaiser Family Foundation, about 27 percent of people under the age of 65 have serious enough preexisting conditions that they would have been denied coverage prior to Obamacare. Those people would be left struggling to pay higher premiums in the states that opt out of the Obamacare protections. Republicans have promised government-funded high-risk pools as a fallback option, but they have wildly exaggerated the amount of money that the bill would provide for these pools. Just $8 billion over 5 years is earmarked for high-risk pools (with no future money promised). According to the CBO, that amount “would not be sufficient to substantially reduce the large increases in premiums for high-cost enrollees.”