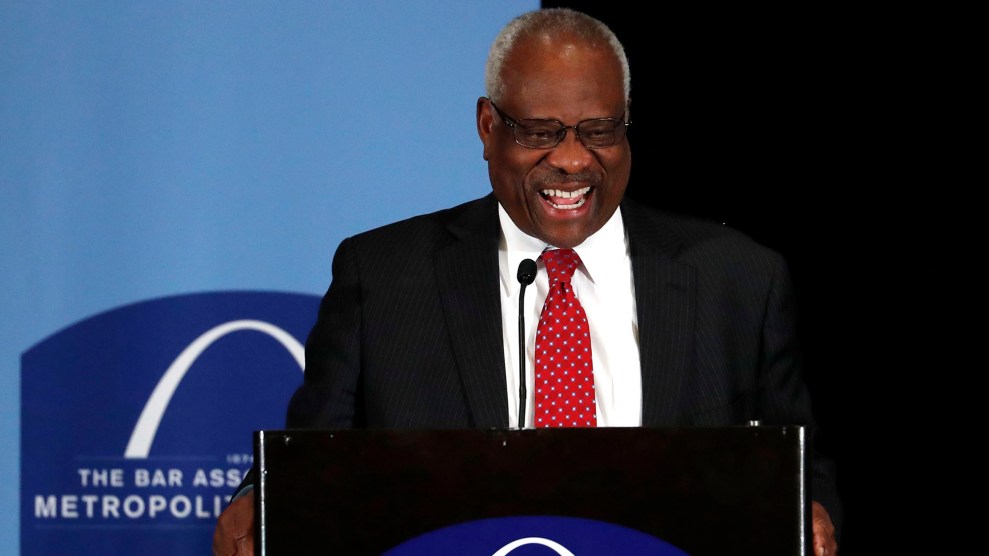 The Supreme Court on Monday struck down North Carolina’s congressional map, finding that the Republican legislature unconstitutionally used race in drawing district lines that reduced the voting power of minorities.

In the 5-3 decision, with ultra-conservative Justice Clarence Thomas joining the four liberal justices in the majority, the court ruled that North Carolina unconstitutionally packed African American voters into two districts, in violation of the 14th Amendment’s Equal Protection Clause. Justice Neil Gorsuch, who joined the court in April, did not participate in the ruling.

“This decision by Justice [Elena] Kagan is a major victory for voting rights plaintiffs, who have succeeded in turning the racial gerrymandering cause of action into an effective tool to go after partisan gerrymanders in Southern states,” election law expert Rick Hasen wrote on his blog Monday morning. “That Justice Kagan got Justice Thomas not only to vote this way but to sign onto the opinion (giving it precedential value) is a really big deal.”

The Republican majority in North Carolina’s legislature drew the contested congressional district map in 2011. It added more African Americans to two districts that already had significant black populations and had consistently elected the representatives—all Democrats—favored by most black voters since the 1990s. Voters in those districts sued, claiming the lawmakers had intentionally reduced African American voting power elsewhere in the state. States are generally not allowed to use race as the predominant factor in drawing district lines.

To justify their changes to one of those districts, the 1st Congressional District (CD1), Republican lawmakers claimed they were complying with the mandate of the 1965 Voting Rights Act (VRA), which states that minority voters must be able to elect representatives of their choosing. In a brief to the Supreme Court, the legal team defending the Republican map argued that past voting behavior in CD1 could not predict future voting, particularly since the 2011 map added nearly 100,000 people to the district. A federal district court disagreed in February 2016 and ruled the use of race in drawing CD1 unconstitutional.

A map of CD1 shows the lengths Republicans went to in order to fill it with as many African Americans as possible. A brief from the lawyers for the citizens fighting the map describes the district as “a behemoth sprawling from the rural Coastal Plain to the City of Durham, extending tendrils to sweep in pockets of African-American voters.”

Kagan’s majority opinion found that the state unconstitutionally used race in drawing the map for CD1. “Although States enjoy leeway to take race-based actions reasonably judged necessary under a proper interpretation of the VRA, that latitude cannot rescue District 1,” she wrote. “Neither will we approve a racial gerrymander whose necessity is supported by no evidence and whose raison d’être is a legal mistake.”

Specifically, the Supreme Court found that the state’s argument that the VRA could be used to pack black voters into a district was not supported by the law. “[W]e further uphold the District Court’s decision that §2 of the VRA gave North Carolina no good reason to reshuffle voters because of their race,” the opinion states.

The 12th Congressional District (CD12) is even more curiously constructed. It is 120 miles long but only 20 miles across at its widest point—making it so thin as to be barely perceptible on a map. CD12 has long been serpentine, but the new map exacerbated its strange shape. It doesn’t contain any whole counties or cities, but rather portions of six counties and 13 towns and cities. The Republican legislature explained its shape by saying it was based on partisan, not racial, concerns. The goal was to make it even more overwhelmingly Democratic in order to help Republicans win surrounding districts—a tactic that is presumably legal because states are allowed to consider partisanship when drawing districts. But in its February 2016 ruling, the federal district court found that race was the predominant consideration in drawing CD12 as well.

The Supreme Court deferred to the district court’s decision on CD12. “[W]e uphold the District Court’s finding of racial predominance respecting District 12,” Kagan wrote. “The evidence offered at trial, including live witness testimony subject to credibility determinations, adequately supports the conclusion that race, not politics, accounted for the district’s reconfiguration.”

Despite the Supreme Court’s decision, the 2011 map has served Republicans well in North Carolina even as it has made its way through state and federal court. In 2012 and 2014, when the statewide vote was closely divided, Republicans won 10 of the state’s 13 House seats. In 2016, with a slightly tweaked map, Republicans kept that 10-3 advantage, even as Donald Trump barely won the state and a Democrat, Rory Cooper, won the governorship.