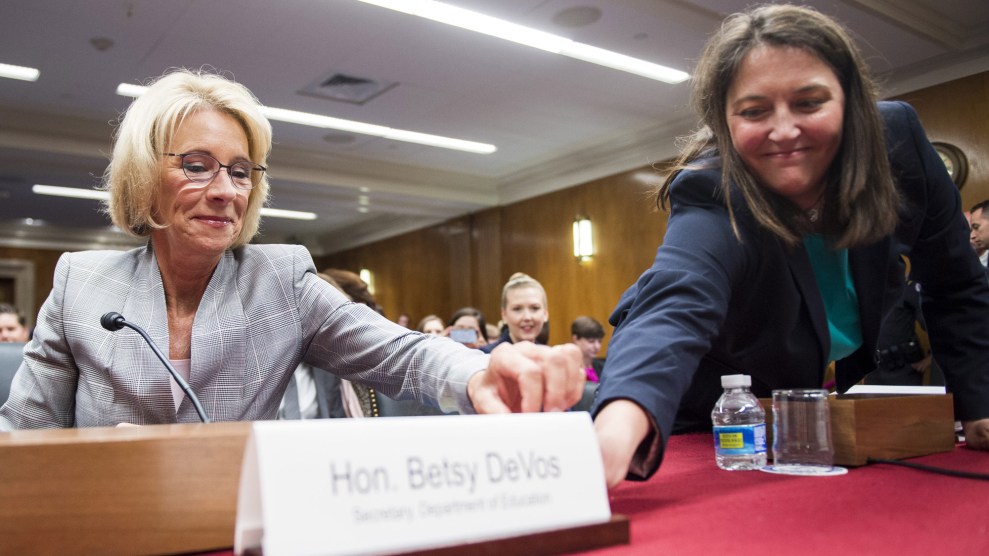 On Thursday, a coalition of Democratic attorneys general from 18 states and the District of Columbia sued Education Secretary Betsy DeVos and her department for freezing a rule aimed at helping student loan borrowers who have been defrauded by exploitative institutions.

The attorneys general, led by Massachusetts’ Maura Healey, argued in a federal court filing that the Department of Education violated federal law when it delayed the implementation of the “borrower defense to repayment” rule—an Obama-era regulation designed to speed up the process for students to get loan relief if they prove that their colleges engaged in predatory practices to entice them to enroll there. The rule was finalized last October after years of negotiation and set to go into effect on July 1.

When the Education Department announced in June that it planned to delay enacting the rule, many saw the move as a loss for student loan borrowers and another victory for the for-profit colleges that are largely at the center of borrower defense claims.

The department, though, argues that it is postponing the rule and working to renegotiate it “due to pending litigation,” referring to a lawsuit filed against the department in May by the California Association of Private Postsecondary Schools, a group of for- and non-profit colleges, to stop the borrower defense rule from going into effect altogether. In a statement announcing the regulatory rollback, DeVos criticized the borrower defense rule, claiming it created a “muddled process that’s unfair to students and schools and puts taxpayers on the hook for significant costs.”

After the attorneys general’s lawsuit was filed this week, Education Department press secretary Liz Hill said in a statement that their case was “ideologically-driven” and condemned the Obama administration’s adoption of the regulations “through a heavily politicized process and failed to account for the interests of all stakeholders.”

The delay of the borrower defense rule is just the latest regulatory rollback from the Education Department since DeVos took its helm. The department has also halted the implementation of the gainful employment rule, which was intended to hold vocational programs accountable for students who graduated with burdensome debt. And earlier this year, the department launched a task force aimed at evaluating all education-related regulations to determine whether to make changes to them. Consumer advocates and state officials have previously questioned the department’s hiring of former for-profit college officials and the halted collaboration with states in cracking down on the industry.

Clare McCann, a senior policy analyst who follows higher education at New America, tells Mother Jones that the department’s recent actions play into a “concerning” pattern that suggests it is “more interested in protecting the interests of institutions than they are of protecting borrowers and taxpayers’ interests.”

Under President Obama, the Education Department cracked down on for-profit colleges that engaged in predatory practices, such as false advertising and misleading students about graduation incomes, resulting in the high-profile closures of Corinthian College and ITT Institute, among other institutions. The result was thousands of students with worthless degrees facing mounting bills. At the time, the process to get approved for loan forgiveness was seldom used and complicated, with each claimant having to prove that the college they attended was engaged in fraud, never mind that thousands of claims might apply to the same school. But Corinthian’s collapse and the surge of claims that followed prompted the Education Department to overhaul the borrower defense rule.

The current backlog for pending borrower defense claims has now reached more than 64,000 pending applications. The new rule was meant to streamline the process and allow for groups like former Corinthian College students to be considered for a larger relief claim. By January of this year, the Department of Education had discharged more than $550 million in debt relief to former Corinthian College students. The rule also prevented colleges from imposing mandatory arbitration agreements or class action waivers and required schools at a financial risk of collapse to cover the costs of student loans that needed to be discharged.

So the delayed implementation of the rule—as well as the uncertainty that comes with establishing a newly negotiated rule, as DeVos has promised they’re trying to do—could force students seeking relief to wait even longer under mounting debt, McCann says. Even as the Education Department tries to discharge loans as quickly as possible—they announced last month that nearly 16,000 applications were being processed and some borrowers could expect to receive payments “within next several weeks”—McCann says that the department undercuts its own efforts by keeping in place a more “cumbersome” process of submitting an individual claim to convince the department that the college they attended engaged in fraud.

For now, the attorneys general will try to end the rule’s delay in court. “Since day one, Secretary DeVos has sided with for-profit school executives against students and families drowning in unaffordable student loans,” Massachusetts attorney general Healey said in a statement. “Her decision to cancel vital protections for students and taxpayers is a betrayal of her office’s responsibility and a violation of federal law.”

As for students awaiting financial relief, McCann says, “they are continuing to suffer from the economic hardship of going to a school that they believe defrauded them and potentially leaving them with a degree with little to no value without getting any kind of relief from the federal government.” Meanwhile, on the same day as the attorneys general’s lawsuit, two former students who attended the for-profit college, New England Institute of Art, also sued the Education Department to challenge its delay to the borrower defense rule. According to the court filing, they planned to bring a class action case against the art school and its parent company after the new rule was supposed to go into effect.