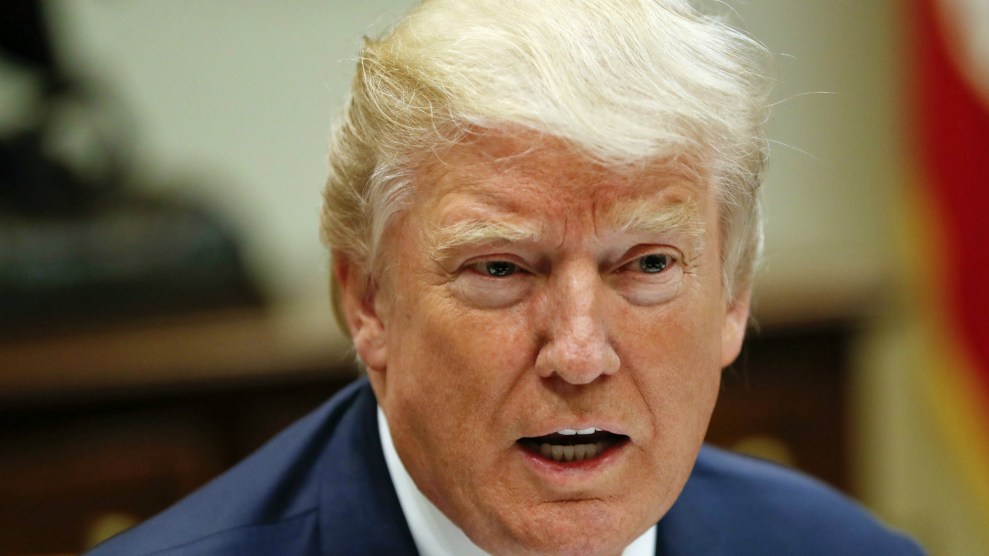 A Russian-American lawyer who attended the June 2016 Trump Tower meeting with key members of Donald Trump’s inner circle, including Donald Trump Jr. and Jared Kushner, was once at the center of a US government investigation into Russian money laundering.

On Tuesday the Washington Post identified Ike Kaveladze as the eighth attendee of a meeting Trump Jr., Kushner, and then-Trump campaign chairman Paul Manafort held in expectation they would receive damaging information about Hillary Clinton as part of a Russian government effort to boost Trump’s candidacy. The other participants in the meeting included Natalia Veselnitskaya, a Russian lawyer with ties to the Kremlin, and Rinat Akhmetshin, a former Soviet counterintelligence operative now working as lobbyist in the United States.

The sit-down was arranged by music publicist Rob Goldstone, who represents Emin Agalarov, the pop singer son of Russian construction magnate Aras Agalarov. In 2013, Donald Trump partnered with the Agalarovs to bring the Miss Universe pageant to Moscow. In a June 3, 2016 email to Donald Trump Jr., which the president’s son forwarded to Kushner and Manafort, Goldstone explained: “Emin just called and asked me to contact you with something very interesting. The Crown prosecutor of Russia met with his father Aras this morning and in their meeting offered to provide the Trump campaign with some official documents and information that would incriminate Hillary and her dealings with Russia and would be very useful to your father.” He added, “This is obviously very high level and sensitive information but is part of Russia and its government’s support for Mr. Trump—helped along by Aras and Emin.”

Kaveladze, the vice president of Crocus Group International, Aras Agalarov’s company, attended the Trump Tower meeting as a representative of the Agalarovs. And it turns out he has a controversial past.

In November 2000, a Government Accountability Office report—requested by then-Sen. Carl Levin—identified International Business Creations, a business run by Kaveladze, as being responsible for opening more than 2,000 bank accounts at two U.S. banks, at the behest of Russian-based brokers. The accounts were used to move more than $1.4 billion from individuals in Russia and Eastern Europe to various spots around the world.

“It is relatively easy for foreign individuals or entities to hide their identities while forming shell corporations that can be used for the purpose of laundering money,” the report determined.

The report—which did not mention Kaveladze by name but did identify companies he founded—harshly criticized the banks involved for having lax policies that allowed accounts to easily be opened and used without the bank ever knowing who the actual customers were.

Kaveladze, who could not be reached for comment on Tuesday, told the New York Times at the time that the entire investigation was unfair and biased.

“What I see here is another Russian witch hunt in the United States,” he said in 2000.

According to the GAO report, Kaveladze, who was born in the Republic of Georgia during the Soviet era, set up a company in 1991 to establish Delaware corporations at the request of Russian brokers. In 1996, he expanded the business to include setting up bank accounts for the new corporate entities he created. The report said Kaveladze’s company set up more than 2,000 Delaware corporations and several hundred bank accounts.

The GAO concluded that hundreds of millions of dollars had been transferred through these accounts associated with Kaveladze. Below is an example of a transaction tracked by GAO investigators.

The full GAO report can be read here: