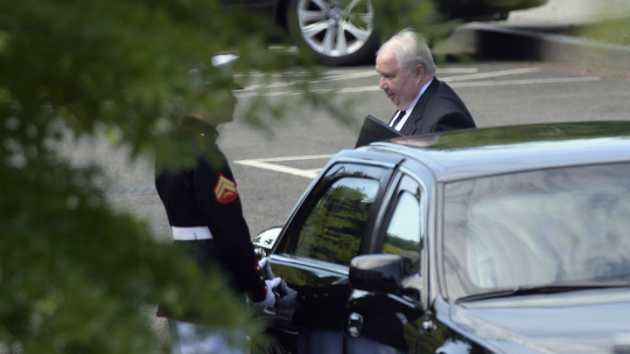 At the bar in Washington’s posh St. Regis Hotel Tuesday night, tourists watched CNN pundits opine on the bombshell revelations that Donald Trump Jr. tried to conspire with Russians in a bid to help his father in the 2016 presidential election.

Many were unaware that in a ballroom a hundred or so feet away, a central figure in the ongoing Russia interference scandal was holding court. After nearly a decade in D.C., it was time for the ubiquitous, outgoing Russian Ambassador Sergey Kisylak, whose once-secret meetings and communications with former National Security Advisor Michael Flynn and Attorney General Jeff Sessions rocked the Trump administration and helped fuel suspicions of Kremlin meddling in US politics, to say goodbye.

Journalists were barred from the closed-door farewell reception hosted by the US-Russia Business Council. Several attendees, though, described what outsiders might consider a strangely serene and low-key send-off, at which business people and policy wonks mingled, snacked, and remembered the softer side of a man accused of overseeing Russian espionage efforts over nine years as Moscow’s man in D.C. There was little reference, they said, to the swirling collusion controversy that has left relations between the countries at their worst since the Cold War, not to mention the big news of the day about Donald Trump Jr.

“To me, he is Father Claus. He is Santa Claus,” said Natalia Kalishman, a Florida-based immigration lawyer born in the former Soviet Union, said of Kislyak, who is often described as genial and shares St. Nick’s portly build. “He really has a weak spot for his grandchildren. But he’s tough and he says it as it is.”

“I talked to him briefly to wish him well,” said Paul Saunders, executive director of the Center for the National Interest, a think tank that hosted a speech last year in which Donald Trump met Kislyak and outlined his  “America First” doctrine. (Saunders’ organization has disputed assertions that it has overly-close ties to Russian President Vladimir Putin, claims which he said reflect “a 1950s era climate” with “people looking for a lot of things that aren’t there.”)

Guests at the reception said accusations that Russia meddled in the 2016 presidential election came up only indirectly, as, in his remarks, Kislyak emphasized that relations between the two countries are cyclical.

“The barometer goes up and down, up and down,” Kalishman summarized. “Differences can always be overcome.”

“Business, cultural relations don’t depend on international relations,” said her husband, Steve Kalishman, who works with Sister Cities International*, which partners US and Russian cities, as well as those in other countries, also outlining Kislyak’s message. “We’re focused on people to people, business to business, school to school.”

Mother Jones caught Kislyak as he exited the St. Regis, accompanied by a few well-wishers but no evident security. Asked to assess his tenure, the ambassador called it “interesting.”

“It could have been more interesting,” he added when pressed on whether he regretted the recent downturn in relations.

It was not clear exactly what he meant. But Kislyak left the confusion hanging, climbed in the idling car, and departed.

*Correction: The original version of the article said Steve Kalishman works for Sister Cities International. Kalishman is a member of the group’s board, but not a paid employee.