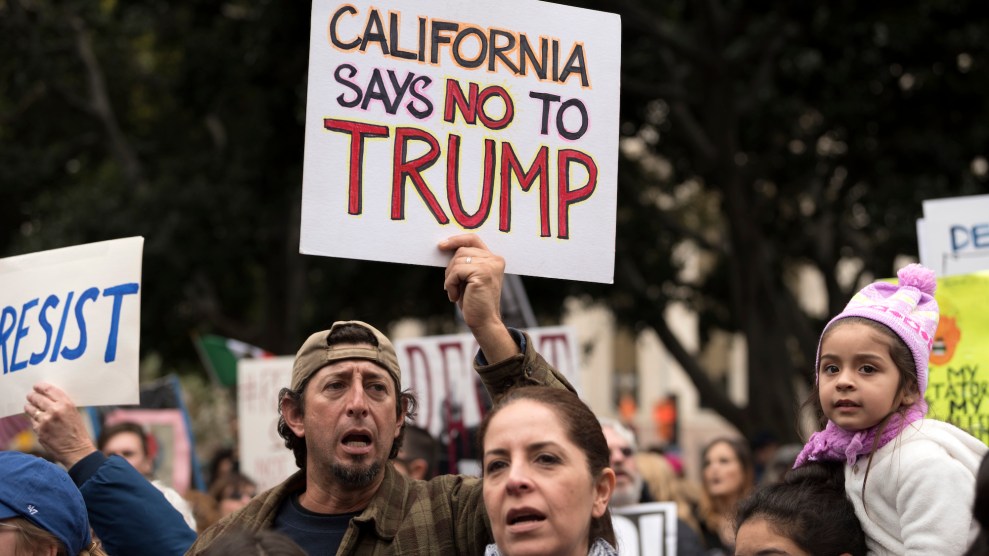 As President Donald Trump doubles down on his aggressive efforts to locate and deport undocumented immigrants, California’s Democratic lawmakers have been drafting a bill that would put new limits on federal immigration authorities’ ability to operate in the state. If passed into law, the California Values Act would erect a legal wall between California and Trump’s immigration policies. The bill, authored by State Senate President Pro-Tempore Kevin de León, would effectively bar cooperation between federal immigration authorities and California’s local, county, and state law enforcement agencies.

Here’s what you need to know about what’s been called the “sanctuary state” bill:

How would the California Values Act try to block Trump’s immigration policies?

The bill would limit the ways state and local law enforcement agencies can cooperate with federal immigration enforcement. Currently, it is standard practice in many jurisdictions for police departments to coordinate with Immigration and Customs Enforcement in a variety of circumstances. The California Values Act would broadly bar this practice, with a few exceptions. The bill prohibits state and local law enforcement from inquiring about a person’s immigration status, detaining a person at ICE’s request, providing information about a person’s release from custody (unless that information is already public), and generally sharing any information with federal immigration officials unless they have a warrant.

The California Values Act also instructs the state’s attorney general to draft model policies designed to limit cooperation “to the fullest extent” between state facilities such as schools, hospitals, and courthouses and federal immigration authorities. This measure is intended to ensure that California residents use public facilities with minimal fear that they or a family member may be arrested by immigration agents. ICE agents have staked out courthouses and schools in hopes of netting people on their list.

No. Immigration agents would be free to conduct operations in California. And there are specific instances in which state and local agencies may conduct joint operations with federal officials. But federal immigration enforcement efforts in California would be significantly curtailed by the law.

ICE largely depends upon the help of local law enforcement agencies to do its work. It is standard practice for ICE to file a “hold request” or “detainer,” asking a local law enforcement agency to continue holding a person in custody who would otherwise be released. Between 2007 and 2015, ICE filed 440,000 detainer requests in California; about 255,000 were fulfilled. The California Values Act would make it illegal for any state or local agency to respond to these requests.

Why do California Democrats think this bill needed?

Nearly one in three Californians is foreign born, one in two children in California has at least one immigrant parent, and millions of Californians belong to families whose members have mixed immigration status. The bill’s authors believe that public officials must maintain the trust of its immigrant population—trust that is eroding under President Trump.

Some California police chiefs and county sheriffs support the bill. Los Angeles Police Department Chief Charlie Beck announced his support of the bill in June. “We do not want to lose trust, because we believe trust is the most important thing in policing,” he said. “The ability to get witnesses to come forward, the ability to get victims to come forward can be severely detrimented by civil enforcement of immigration by local authorities.” The LAPD, which patrols a county where about 10 percent of the population is undocumented, has a longstanding policy to not initiate investigations based on a person’s immigration status.

Is California prepared for a legal fight over a law that seems to directly contradict federal policy?

It seems so. When Chuck Todd asked Governor Jerry Brown on Meet The Press last weekend if California was considering litigation against the federal government, Brown deferred to state Attorney General Xavier Becerra. But the governor also said “a few judicious forums to resolve this dispute between the federal government and California can be very helpful for the whole country.” Becerra has vowed to fight any federal efforts to defund so-called sanctuary jurisdictions, including California.

Who opposes the bill?

The bill’s largest and most vocal opponent is the California Sheriff’s Association, which argues that it will prevent immigration officials from going after violent criminals and ensuring public safety. Preventing local and county law enforcement agencies from communicating with federal immigration officials, the Sheriff’s Association says, increases the chance that a potentially violent offender who is in the country illegally could be released from custody.

Many sheriff’s departments have contracts with ICE to hold detainees in their jails for a fee. This practice would have to end if the California Values Act becomes law.

What major exceptions are in the bill?

For the most part, the California Values Act does not block federal immigration agents from carrying out judicial warrants. The bill also permits joint law enforcement operations, for example, a federal-local operation between the LAPD and the Drug Enforcement Administration that might result in suspects being deported. These joint operations are a sticky subject, and Gov. Brown has said this section of the bill might still need some work. “The goal here is to block and not to collaborate with abuse of federal power,” said Brown on Meet the Press. “It is a balancing act. It does require some sensitivity. And that’s why I take a more nuanced and careful approach to dealing with what is a difficult problem. Because you do have people who are not here legally, they’ve committed crimes. They have no business in the United States in the manner in which they’ve come and conducted themselves subsequently.”

What is the timeline for the bill?

The bill has been passed by the state Senate and has moved through two state Assembly committees. Progress will resume when the Assembly to reconvenes on August 21. The bill’s backers hope to have it on the governor’s desk before the end of the legislative year on September 15.