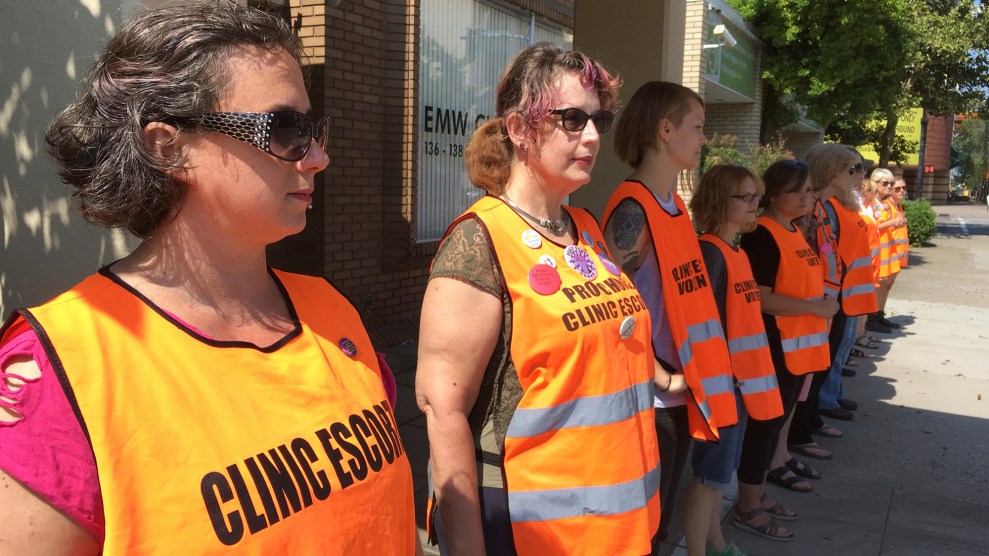 Meg Stern, left, and other escort volunteers lined up outside the EMW Women's Surgical Center in Louisville, Ky. Dylan Lovan/AP

Kentucky is down to its last abortion clinic, and it has gone to court in order to stay open.

EMW Women’s Surgical Center in Louisville is in the US District Court of the Western District of Kentucky this week fighting to retain its license. In March, the clinic was notified by Republican Gov. Matt Bevin’s administration that it was failing to meet state health regulations, which require agreements with a local hospital and an ambulance service in case of medical emergencies. At that point, US District Judge Greg Stivers blocked the closure until the case could go to trial.

EMW was joined by Planned Parenthood in the federal lawsuit and contends that the regulations are not motivated by protecting women’s health, as the governor argues, but are an attempt by the Bevin administration to shut down abortion access in the state. As Donald Cox, a lawyer representing EMW, said at the beginning of the trial on Wednesday, “We have a new sheriff in town who’s vowed to get rid of abortion.”

In the federal lawsuit, EMW says their agreements are long-standing, conform to state regulations, and that the notification of any violations came “out of the blue.” The clinic has had an agreement with Mercy Ambulance since 2008 and began their transfer agreement with the University of Louisville Hospital in 2014.

Kentucky’s Cabinet for Health and Human Services contends that EMW’s agreement with the hospital is not signed by an authorized person, and the hospital “withdrew from a similar agreement with another abortion facility in 2016.” The Cabinet is referring to Planned Parenthood of Indiana and Kentucky, which has tried unsuccessfully for more than a year to secure a long-term license to provide abortions at its downtown Louisville clinic. Last year, the clinic was able to sign a transfer agreement with the U of L hospital, only to have it abruptly terminated less than a month later because of political pressure from the Bevin administration, Planned Parenthood alleges.”It’s not about whether this business, EMW, stays in business,” countered Steve Pitt, Bevin’s general counsel. “It’s about to what extent the Commonwealth of Kentucky has the right to regulate abortion practices for the health and safety of women.”

When asked about the circumstances leading up to the licensing fight, Robert Silverthorn Jr., a health care regulator, testified on Thursday that his office has not had any communication with Bevin’s office about the dispute.

EMW and Planned Parenthood have argued that federal law requires that in the event of an emergency, hospitals are required to accept all patients, regardless of where they came from and the nature of the emergency. They also note that Louisville Emergency Medical Services is available for transporting patients from EMW and Planned Parenthood, even though complications from abortions are extremely rare—a 2014 study pointed out that it occurs at about the same frequency as complications from a colonoscopy—less than a quarter of a percent of the time.

Gov. Bevin, who considers himself  “unapologetically pro-life,” has made curbing abortion access a central feature of his administration. Under Bevin, two anti-abortion measures were passed in early January. One prohibits abortions after 20 weeks of gestation. The other requires abortion providers to perform an ultrasound prior to the procedure and to describe the fetus in detail to the patient even if she objects (though she is not required to look at the ultrasound images). The ACLU also filed a lawsuit in January to contest this law, which it says violates doctors’ First Amendment rights.

Bevin’s administration successfully shut down an EMW clinic in Lexington earlier this year over a licensing dispute. (The landlord also refused to renew the clinic’s lease.)  Should the state prevail in the case against the EMW clinic, Kentucky would become the first state in the nation to be without a single abortion provider. It is now one of seven states—North Dakota, South Dakota, Missouri, Mississippi, Wyoming and West Virginia—that have only a single clinic to provide abortion services.

In 2016, the Supreme Court ruled in favor of Texas abortion clinics that were being forced to comply with Targeted Regulation of Abortion Providers, or TRAP laws, that were similar to the regulations being disputed in Kentucky,  saying they posed an “undue burden” on women living there. The Supreme Court ruling also concluded that Texas’ regulatory laws offered no benefit in terms of protecting women’s health. Planned Parenthood and EMW are requesting the 1998 law that requires transfer agreements with a hospital and an ambulance service be struck down as unconstitutional barriers to abortion, which they believe “falls squarely” within the scope of the Supreme Court ruling. This case will test the application of the recent Texas ruling in the federal courts.