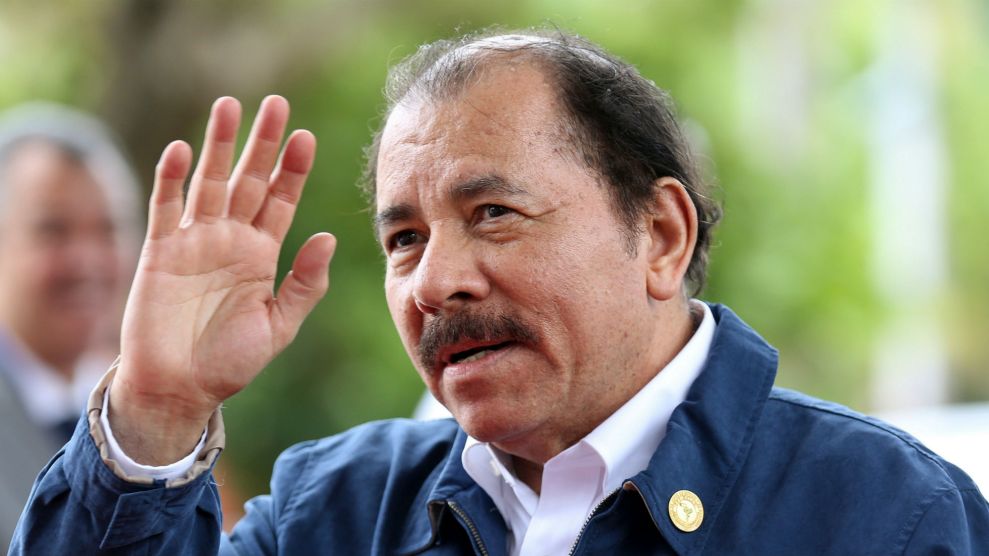 This story was originally published by Huffington Post and appears here as part of the Climate Desk collaboration.

Nicaragua, one of only two countries to initially reject the Paris climate accord, now plans to sign the agreement.

The Central American nation originally refused to sign the global deal to cut planet-warming emissions in protest of the agreement not doing enough to require historic emitters, such as the United States and European countries, to overhaul their energy systems and pay for poorer countries to do the same. Syria, its infrastructure in shambles after six years of civil war, also did not sign.

But three months after President Donald Trump announced plans to withdraw the U.S. from the agreement, Nicaragua President Daniel Ortega said he will sign onto the accord in a show of support for countries suffering from disasters caused by climate change.

“We have to be in solidarity with this large number of countries that are the first victims, who are already the victims and are the ones who will continue to suffer the impact of these disasters,” he said Monday, according to the Nicaraguan newspaper El Nuevo Diario.

“We will soon adhere, we will sign the Paris Agreement,” he added. “We have already had meetings addressing the issue and we have already programmed the adhesion of Nicaragua and the signing of the country agreement.”

Following months of reality TV-style suspense, Trump proclaimed that the U.S. would pull out of the non-binding accord at a televised press conference in June. In his speech, he described the deal as if it were a trade agreement, infuriating critics who said his decision demonstrated a severe misunderstanding of the 195-country pact, forged in December 2015. He suggested the deal was designed to redistribute wealth from the U.S.―which has paid just one-third of the $3 billion it pledged to help poorer countries adapt to climate change―to other nations.

“We have to be in solidarity with this large number of countries that are the first victims, who are already the victims and are the ones who will continue to suffer the impact of these disasters,” Ortega said .

Ortega’s announcement this week ramps up pressure on the White House to reverse Trump’s decision. The president’s refusal to accept the basic science behind climate change drew renewed criticism this month after back-to-back hurricanes―which scientists say were made worse by warming oceans―wreaked havoc across Texas, Florida and U.S. territories in the Caribbean.

The process of withdrawing from the accord cannot begin for another few years, and won’t be complete until November 2020. The Wall Street Journal reported last week that U.S. officials were considering avenues to stay in the agreement, though White House officials denied the report.

“This is continuing evidence that the U.S. is isolating itself,” Andrew Light, a climate policy expert at the World Resources Institute, told HuffPost by phone on Wednesday. He noted that Nicaragua rejected the deal because it went too easy on countries like the U.S., whose national wealth was built on top of being the world’s largest historic emitter of greenhouse gas emissions.

“If they’re coming around to this,” Light said of the Nicaraguan government, “it’s just more evidence that the U.S. position is out of touch with reality.”