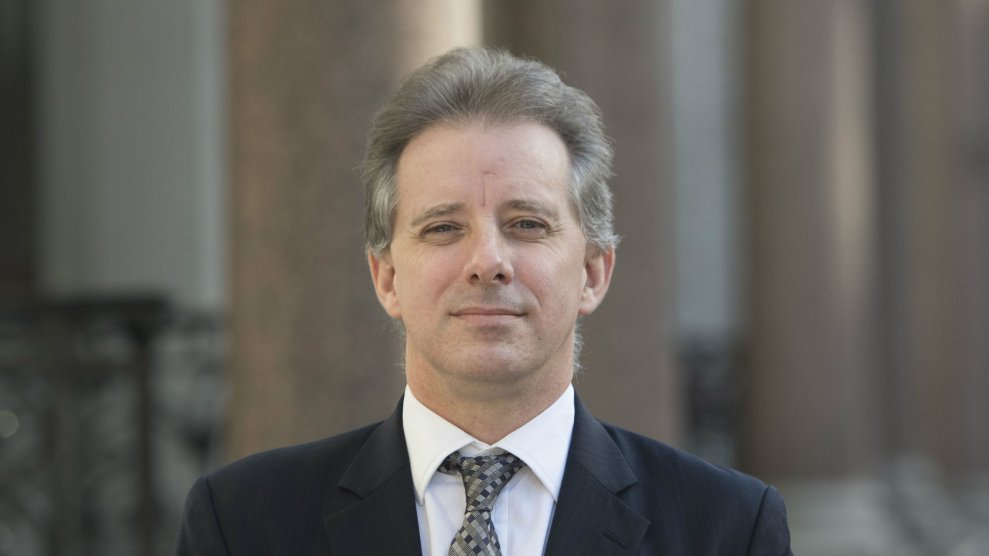 When the existence of these memos was first reported (uh, by me, in October 2016), I noted that Steele’s investigation was underwritten by a Democratic source. Now the public knows which ones. But as Republicans seize on this development to try to discredit the Steele memos and the whole Trump-Russia scandal, they are also pushing for an investigation into what they claim is the real scandal involving Hillary Clinton and the sale of a uranium company with US operations to a Russian government agency. Fact-checkers have already declared this supposed scandal, which President Donald Trump has pushed, a phony. But here’s where the hypocrisy truly kicks in: the Clinton-uranium story originated with an anti-Clinton book called Clinton Cash, which was produced at a nonprofit supported by right-wing hedge-fund manager Robert Mercer and co-founded by conservative firebrand Stephen Bannon.

So you see what’s happening? Republicans are asserting the Steele memos should be dismissed because they are a dastardly Democratic oppo concoction and saying this somehow undermines the whole Trump-Russia scandal. Yet at the same time, they are demanding an investigation of the fake Clinton-uranium scandal that was based on a debunked story subsidized and promoted by a big-money conservative donor and Trump backer.

At the heart of all this is a simple and troubling fact: Most Republicans don’t seem to give a damn about the Russian assault on the 2016 election and the profound implications of that act of information warfare. Trump, of course, has refused to fully acknowledge Vladimir Putin’s attack on American democracy and has branded all reporting of interactions between him and his associates and Russia as “fake news.” (His denial of Russia’s actions was one form of collusion.) Most of his party has followed his lead. Though there are three congressional investigations underway related to the Trump-Russia scandal, several prominent Republicans, including Sen. Chuck Grassley of Iowa, the chair of the Senate Judiciary Committee, and Rep. Devin Nunes, the chair of the House Intelligence Committee, have been trying to change the subject by focusing on the Steele documents more than the extensive Russian covert plot—which included the hack-and-dump operations and, as we now realize, clandestine social-media campaigns. These Republicans also have been attempting to develop competing scandals, such as the Clinton-uranium affair or the unmasking controversy. (For the latter pseudo-scandal—a Nunes favorite—Republicans have claimed former Obama administration officials who reviewed classified intelligence intercepts improperly asked for the names of Americans caught in US intelligence eavesdropping. Unmasking actually is a common action conducted by national security officials, and so far there has been no evidence anyone engaged in wrongful unmasking.)

Republicans and conservatives looking to protect the president from the Russia scandal keep trying to build up distractions. The Steele memos have been a main target. Republicans appear to believe that if they can cast the Steele memos as no more than a spurious product of partisan oppo research—essentially, a dirty trick—they can persuade people that the whole Trump-Russia affair is the hoax the president claims it is. Some Trump backers even contend that the FBI investigation is a sham because it was predicated on the Steele material.

There is no indication that Steele’s memo triggered the FBI’s probe of the Trump-Russia connections. The available information shows that the bureau was already interested in the ties between Trump’s campaign chairman Paul Manafort and Putin-friendly Ukrainians and that the FBI was keeping an eye on Carter Page, a Trump campaign foreign policy adviser who had in 2013 been a recruiting target of Russian intelligence. Steele did, on his own initiative, start to share his material with the FBI in July 2016—weeks after the Russian hacking of the Democratic National Committee became public—but it was not until early October that the bureau requested a briefing from him. The bottom line: There was plenty of reason for the FBI to investigate Trump-Russia ties without the Steele stuff.

Still, the Steele memos should not be dismissed. Some of his material now tracks with what’s become publicly known. Steele’s first memo, written in June 2016, reported there had been secret exchanges of information between the Russian government and Trump and his team. This past July it was revealed that Donald Trump Jr., Jared Kushner, and Manafort met with a Russian emissary in June 2016 in an effort to obtain dirt on Clinton as part of a secret Russian government scheme to help Trump. That initial Steele memo also reported that the Kremlin had for years been trying to cultivate Trump by offering him lucrative real estate deals in Russia. Though Trump’s efforts to score a big project in Russia has long been known, only recently was it disclosed that during the 2016 campaign, Trump—while he was making positive remarks about Putin—was secretly trying to land a deal to build a Trump tower in Moscow. Was that part of a Russian attempt to woo the developer-turned-candidate?

There are elements in the Steele memos that are far more solid than the Clinton-uranium conspiracy theory. The gist of that tale is that when Clinton was secretary of state she supposedly approved a Russian takeover of a uranium firm that controlled about one-fifth of uranium production in the United States—and she okayed this deal after the Clinton Foundation received $145 million from investors in the company. The two foundational premises of this are inaccurate. The State Department was one of nine federal agencies that had to sign off on the deal, and there is no evidence that Clinton was involved in Foggy Bottom’s decision-making on the matter. (The official in charge of foreign investment issues at the State Department has said that Clinton did not participate in these decisions.) And about $140 million of the payments to the Clinton Foundation came from a Canadian businessman who says he sold his stake in the company three years before the Russian deal. (One investor did give between $1.3 million and $5.6 million while the deal was being reviewed.)

As the New York Times noted in a long 2015 story that used material from Clinton Cash, “Whether the donations played any role in the approval of the uranium deal is unknown.” The Clinton Foundation did pose ethical challenges for Clinton when she was secretary of state—it accepted donations from foreign governments and businesspeople who had interests in US policy—and this was a subject that warranted scrutiny. But there has been no evidence that this uranium deal—hyped by conservative outfits—amounted to a secret and corrupt pay-to-play arrangement. Yet that is what Trump and other Republicans have claimed, in a brazen effort to present a counter-controversy. And this week,  Nunes and Rep. Trey Gowdy (R-S.C.), the chairman of the House Oversight Committee, announced their committees would be conducting a joint investigation of the deal. (This is before there has been any conclusion of the Trump-Russia probe.)

One tragedy of the Trump-Russia scandal is that it has not escaped the hyperpartisan vortex of modern-day politics. The intelligence community—which Republicans used to support and embrace as part of their patriotic duty—has declared that Putin waged cyberwar on the United States to influence an election and help Trump land in the White House. Yet plenty of  Republicans now are looking to deflect and distract. Ultimately, the Steele dossier is not the most important matter at hand. And certainly the uranium deal and unmasking are not. None of these have anything to do with the integrity of the American election process—or with protecting US democracy from future attacks from Russia or elsewhere. Still, many Republicans—Trump, most of all—would rather have congressional committees (and the public) chase after these rabbits rather than confront the bear in the room. And there’s just one word for that: sad.