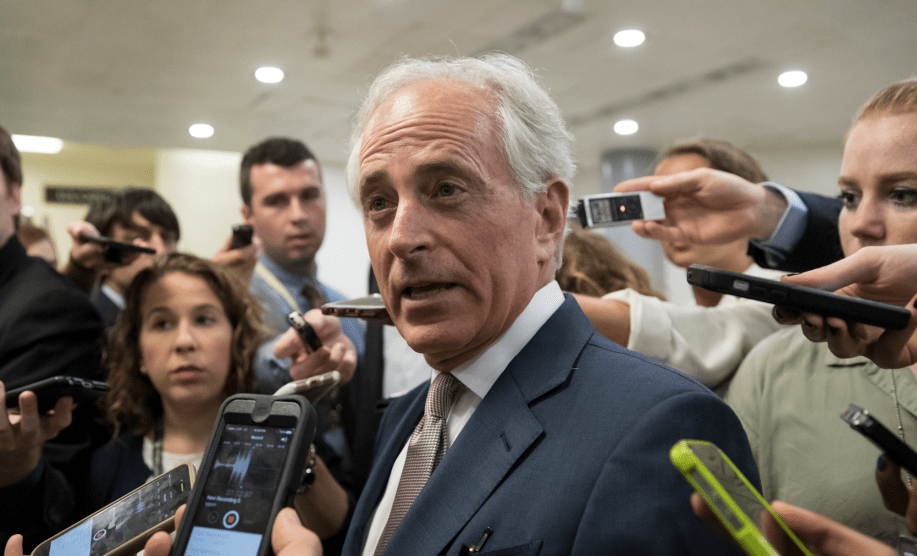 President Donald Trump on Tuesday accused the New York Times of surreptitiously recording a recent interview with Sen. Bob Corker, in which the Tennessee Republican called out the president’s alarming “volatility.” The baseless claim comes on the heels of an extraordinarily public feud between the two men, with Corker saying publicly what many congressional Republicans only utter behind closed doors, including fears that Trump’s recklessness could spark another World War.

The Failing @nytimes set Liddle' Bob Corker up by recording his conversation. Was made to sound a fool, and that's what I am dealing with!

A transcript of the interview published Monday shows Corker explicitly acknowledging that he is speaking on the record. Times reporter Jonathan Martin also responded to Trump’s bizarre claim, adding that two of Corker’s aides, who were were on the line during the conversation, were also taping the call:

Corker had 2 aides on line, also recording, and they made sure after it ended that I was taping, too.

Corker’s increasingly blunt criticism of the president in recent months lead to the current clash. The mounting discord between the two boiled over on Sunday, when Trump claimed Corker “begged” him to endorse his re-election campaign. Corker, who is not seeking another term, hit back and called the White House an “adult day care center.” He subsequently gave his no-holds barred interview to the Times.

“Sen. Corker is certainly entitled to his own opinion, but he’s not entitled to his own facts,” White House Press Secretary Sarah Huckabee Sanders said during a press briefing Tuesday. “The fact is that this president has been an incredibly strong leader on foreign policy and national security, and he’s been a leader on this front.” Sanders then read through a list of the president’s supposed achievements.

Trump’s sparring with members of his own party and perceived allies also extended to Secretary of State Rex Tillerson. In a separate interview with Forbes published Tuesday, Trump dismissed reports Tillerson disparaged him as a “moron” over the summer, but still challenged his secretary of state to an IQ test.

“I think it’s fake news, but if he did that, I guess we’ll have to compare IQ tests,” Trump told the magazine. “And I can tell you who is going to win.”