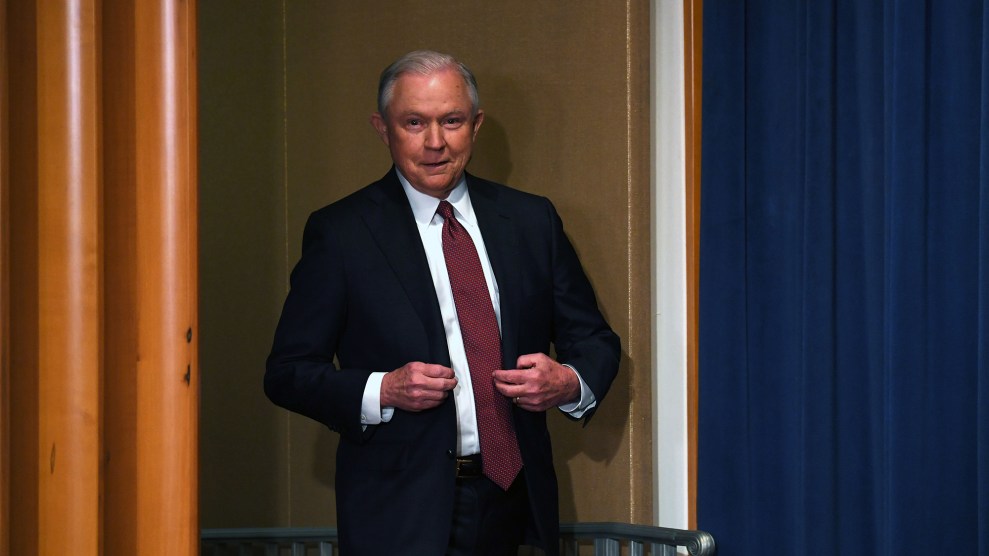 The first day of the Supreme Court’s new term on Monday will feature a rare legal showdown: The Justice Department will face off against another federal agency. It’s unusual for the Justice Department, representing the United States government, to disagree with an executive agency, much less send its top lawyer to try to defeat that agency before the Supreme Court—but it’s only the first of several such confrontations in the Trump administration.

There are currently three major cases in which the Justice Department under Attorney General Jeff Sessions has taken a position in opposition to another executive agency. The nation’s top court will referee one of these disagreements on Monday, and the other two are likely to reach the Supreme Court next year. The situation is partially explained by politics: The department is opposing agencies whose missions—protecting the interests of workers and consumers—are less likely to align with the goals of a conservative administration. But it’s also a signal of how aggressive the Justice Department plans to be in pursing its conservative agenda through the courts.

“It’s highly unusual to have two lawyers, both representing the federal government, taking opposite positions in a court,” says Deepak Gupta, an appellate lawyer who has filed briefs in two of the cases opposing the Justice Department’s positions. “The fact that it’s happening in multiple instances across a broad range of issues is really remarkable and is a sign of how aggressively the Trump administration is flipping positions on a broad range of issues.”

The case going before the court on Monday concerns workers’ right to collective action. The other two will decide whether the creation of the agency in charge of protecting consumers violates the Constitution and whether the 1964 Civil Rights Act protects employees from being fired because of their sexual orientation. The Justice Department’s willingness to take on other agencies is even more notable because in two of the cases, the department’s top lawyers had to change the department’s position in order to oppose the agencies. Such changes are generally not made without serious deliberation and restraint because the department is expected to have a consistent position on legal issues.

“You would expect the justices to perhaps want to look a little bit more closely at precisely what the government’s position is,” says Jonathan Adler, a professor of constitutional and administrative law at the Case Western Reserve University School of Law, “to make sure that any change is in fact well considered and not something that’s being done cavalierly or superficially.”

On Monday, the US solicitor general, a Republican lawyer named Noel Francisco who was confirmed by the Senate earlier this month, will argue against the National Labor Relations Board (NLRB), which his office was representing until a few months ago. Under President Barack Obama, the solicitor general prepared to represent the NLRB, the federal agency charged with protecting workers from unfair labor practices, before the Supreme Court. But in June, the solicitor general’s office switched sides. “After the change in administration, the Office reconsidered the issue and has reached the opposite conclusion,” the office announced in a brief. The NLRB would now need to represent itself, and the solicitor general would appear in court on the other side. Labor advocates say they have to go back to the Reagan administration to find an analogous situation, in which a new administration changed its position before the Supreme Court for what appeared to be largely political reasons.

“This is not normal, even in a change of administration,” says Celine McNicholas, a labor attorney at the Economic Policy Institute, a progressive think tank, and a former counsel at the NLRB. Politics always affect agencies’ agendas, she says, but for the solicitor general to change his office’s stance before the Supreme Court for what appear to be political reasons “is a significant shift.”

The stakes in the NLRB case are high. The question is whether employment contracts can prohibit employees from joining together to seek better working conditions or higher wages or to address grievances, instead forcing them into secret, individual arbitration proceedings. Since 2012, the NLRB has held that these increasingly common mandatory arbitration clauses are illegal because they violate employees’ right to join together, which is enshrined in the 1935 National Labor Relations Act. The Justice Department has taken the position that in order to get a job, workers can be forced to waive any right to petition collectively in the future. If the department and the employers it is siding with prevail, such employment contracts are likely to proliferate further, giving every employer the ability to escape any chance of a class-action lawsuit or other type of collective agitation.

“This is the Trump administration flipping on itself, and it just shows how extreme the argument is that they ended up embracing.”

In March, the Justice Department filed a motion before the DC Circuit Court of Appeals in which it agreed with PHH. A “removal restriction for the Director of the CFPB is an unwarranted limitation on the President’s executive power,” the department wrote in a court filing announcing its new position.The Justice Department has also switched positions in a case over the Consumer Financial Protection Bureau (CFPB), the agency created after the financial collapse in 2008 to protect consumers from predatory mortgages, credit cards, student loans, and other financial products. The agency, the brainchild of Sen. Elizabeth Warren (D-Mass.), has been a target of Republicans since its inception. Now the Trump administration has seized on a chance to weaken it. The case originated when the CFBP levied a $109 million fine against PHH Corporation, a mortgage services provider that it alleged was referring customers to specific insurers in what was tantamount to a kickback scheme. PHH sued, claiming that in creating the CFPB’s leadership structure, Congress made the agency more independent from the president than is allowed under the Constitution. The agency’s director serves a five-year term and can only be fired by the president for cause.

Gupta, a former top official at the CFPB, sees this case as the most troubling of the three because, rather than execute the laws passed by Congress as required by the Constitution, the administration has opted to argue against an act of Congress. This is not unheard of; in 2011, the Obama administration announced that it would no longer defend a federal law that banned the recognition of same-sex marriages. But in announcing that decision, then-Attorney General Eric Holder explained that it was made in consultation with Obama and after an extensive review of the issue.

In contrast, the Trump administration’s decision to flip its position on the constitutionality of the CFPB seemed to lack serious deliberation. Three weeks before the administration announced its new position in a court filing, the department took the opposite position in a case that raised the same constitutional objection to another agency—the Federal Housing Finance Agency (FHFA)—with the same leadership structure as the CFPB. In February, the department filed a brief, signed by acting assistant attorney general Chad Readler, in which it argued that the challenge to the FHFA’s structure was an “illogical thesis” and “wholly without merit.” Three weeks later, Readler made the opposite argument about the CFPB. Acknowledging the conflict, Readler advised the court retroactively in the FHFA case that the government “does not urge reliance” on the argument it had previously advocated.

“It’s exactly the same constitutional challenge and the same arguments, and they called those arguments meritless,” says Gupta, who has filed a brief in the CFPB case in support of the agency. “This is the Trump administration flipping on itself, and it just shows how extreme the argument is that they ended up embracing.” The case is expected to reach the Supreme Court next year.

The courts have already noted the Justice Department’s unusual opposition to autonomous agencies. In the case concerning sexual orientation discrimination, federal appeals court judge Rosemary Pooler commented earlier this week, “It’s a little awkward for us to have the federal government on both sides of this case.”

That case involves a skydiving instructor named Donald Zarda who sued his employer after he was fired for being gay. The Equal Employment Opportunity Commission (EEOC), the federal agency that enforces workplace anti-discrimination laws, has sided with Zarda, arguing that the Civil Rights Act’s prohibition on sex discrimination in the workplace bans sexual orientation discrimination. But in July, the Justice Department weighed in—an unusual move because the government does not often intervene in private employment disputes. It asserted that the position of the United States government is that the landmark civil rights law does not apply to anti-gay discrimination. The case is also likely to reach the Supreme Court next year.

The Justice Department is expected to be wary of politicization and act as consistently as possible, changing positions only in rare cases.

Political considerations help explain why the Trump administration finds itself on the opposite side of these agencies. While the Justice Department represents most federal agencies—operating essentially as a law firm for the government—a handful of executive agencies have prosecutorial authority. These agencies, including the NLRB, CFPB, and EEOC, have more liberal goals, often at odds with today’s Republican Party. And unlike Cabinet members who are replaced in an incoming administration, the leaders of these agencies are appointed to terms of a set number of years, creating the potential for the agencies to be out of sync ideologically with a new administration. As American politics becomes more polarized, the incentive for a new administration to shift its legal stances could grow stronger. That trend spells trouble for the credibility of the government across administrations. “The legal system only works if we think there’s a difference between law and politics,” Gupta says. “It shouldn’t be the case that the two parties have completely different views on what the law is.”

The Justice Department, and in particular the solicitor general’s office, is expected to be wary of politicization and act as consistently as possible, changing positions only in rare cases. As long as the department seems to stay above the political fray, the courts give more weight to the government’s arguments. But under Sessions, the Justice Department has decided not only to take on other executive agencies, but also to switch positions in a number of other cases, including multiple voting rights cases. How judges will react to this fickleness—particularly in the coming Supreme Court term—could affect the Trump administration’s ability to uphold its broader agenda in the courts.

“Of all the offices in the federal government,” says Adler, “we tend to expect the solicitor general’s office to be the most candid about what the law requires versus what’s a policy judgment, and to really not overplay that or overstate that.”