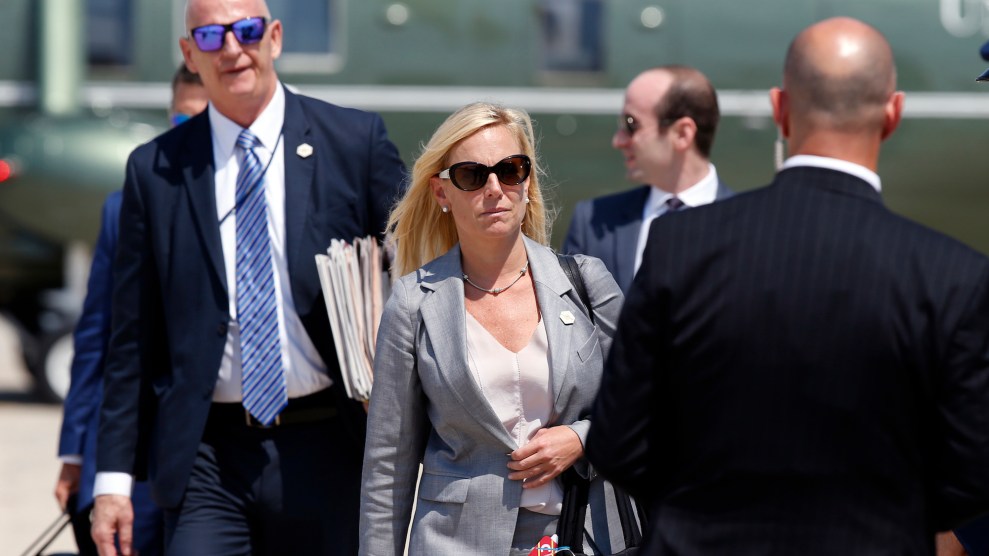 President Donald Trump is expected to pick Kirstjen Nielsen, above, to lead the Department of Homeland Security. Alex Brandon/AP

President Donald Trump is expected to pick Kirstjen Nielsen, a no-nonsense cybersecurity expert, to lead the Department of Homeland Security, Politico reports. Nielsen works as the deputy to White House Chief of Staff John Kelly and served as Kelly’s deputy at DHS before he left for the White House in July.

Unlike many of Trump’s picks, Nielsen already knows the department she is likely to run. “She would be the first person to run the department who has actually worked there,” a source close to the administration told Politico. “She has a deep familiarity.”

Nielsen’s current role as Kelly’s deputy, and chief enforcer, has caused tension in the White House. Her tough tone was seen as “dismissive and lacking in collegiality,” according to more than 10 administration officials interviewed by Politico in September. But that approach has been credited with bringing a semblance of order to Trump’s White House.

At DHS, Nielsen was accused of boxing out Trump loyalists. Roger Stone, a longtime Trump confidante, said in September that “she actively ensured that no Trump supporters were appointed or hired.” Stone went to say, “Like [national security adviser H.R.] McMaster and Kelly, she is a neocon who likely did not vote for Donald Trump and certainly does not support his non-interventionist worldview. If the president fails, it will be because of appointments like this.”

Before Trump entered the presidential race, Nielsen donated $2,500 to a super-PAC that supported Jeb Bush, according to Federal Election Commission records.