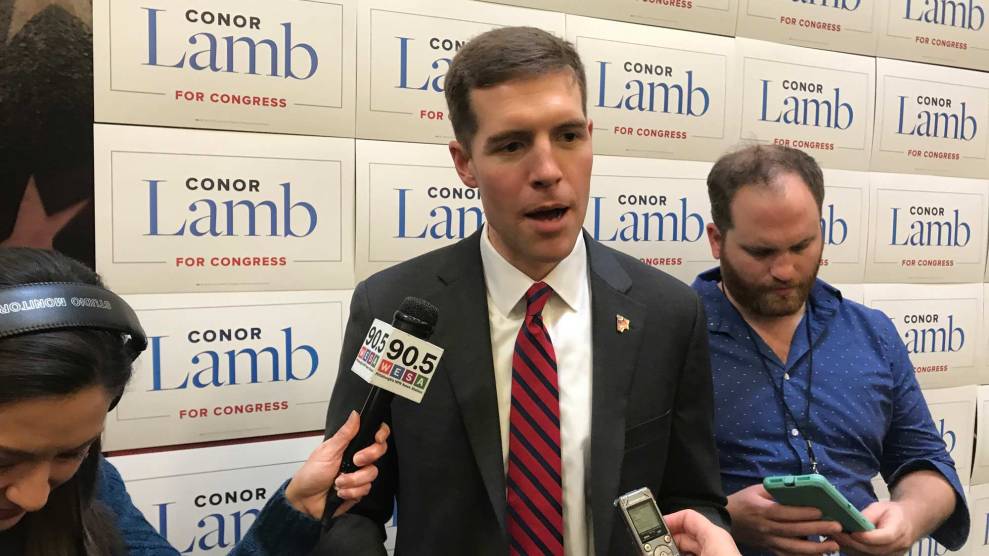 Conor Lamb after winning the Democratic nomination for a Pennsylvania congressional seat.

On Sunday, Pennsylvania Democrats picked Conor Lamb, a former federal prosecutor, as their nominee for a special congressional election to replace disgraced Republican Rep. Tim Murphy, who resigned in October. The special election is scheduled for March.

About 550 local Democratic officials, mostly precinct level committee members, gathered in the Washington, Pennsylvania, high school gym to select a nominee through rounds of secret ballots. The party members were choosing from a diverse slate of candidates including a pro-life county commissioner, an ex-Assistant Secretary for Veterans Affairs, a former head of the state’s teacher’s union, and an ER physician who campaigned on single-payer insurance.

Only three candidates emerged with enough votes to proceed past the first round of balloting: Lamb; Pam Iovino, the former VA official; and Gina Cerilli, the chair of Westmoreland County’s board of commissioners.

Cerilli had alienated progressive activists in the district, describing herself as a “pro-life” and “moderate Democrat”. The most liberal leaning candidates were eliminated early in the contest, allowing Lamb, an ex-Marine and a member of a prominent Pennsylvania political family, to consolidate voters opposed to Cerilli. In the final round Lamb took 319 votes, Cirelli 152, and Iovino 74.

The caucus decision will become official once ratified by the party’s executive committee. Democrats are hopeful that Rep. Rick Saccone, an outspoken Trump-aligned conservative who the Republicans nominated over two more moderate contenders, won’t appeal to the district’s voters.

“Sending him to Capital Hill would be a grievous error,” said Dr. Bob Solomon, a defeated candidate, pledging his support for the Democratic nominee.

The state’s 18th district is Republican leaning, and the Cook Political Report has described the race as “very tough” but “not impossible” for Democrats. The district has tens of thousands more registered Democrats, but Republican candidates perform well at all levels of the ballot. (In 2016, Trump won it by nearly 20 points.)

In his speech to the nominating convention, Lamb, a 33-year old former assistant United States Attorney in western Pennsylvania, hammered Washington Republicans for their tax proposal, cutting healthcare amid an opioid crisis, and failing to pass an infrastructure bill. When reporters asked him about other hot button issues, he was less specific.

“Five weeks ago, I was in a non-political job as a federal prosecutor,” Lamb said shortly after his victory. But he dodged specific questions about gun control and public funding of abortion.

“Everything like that,” he said, “we can talk about later.”