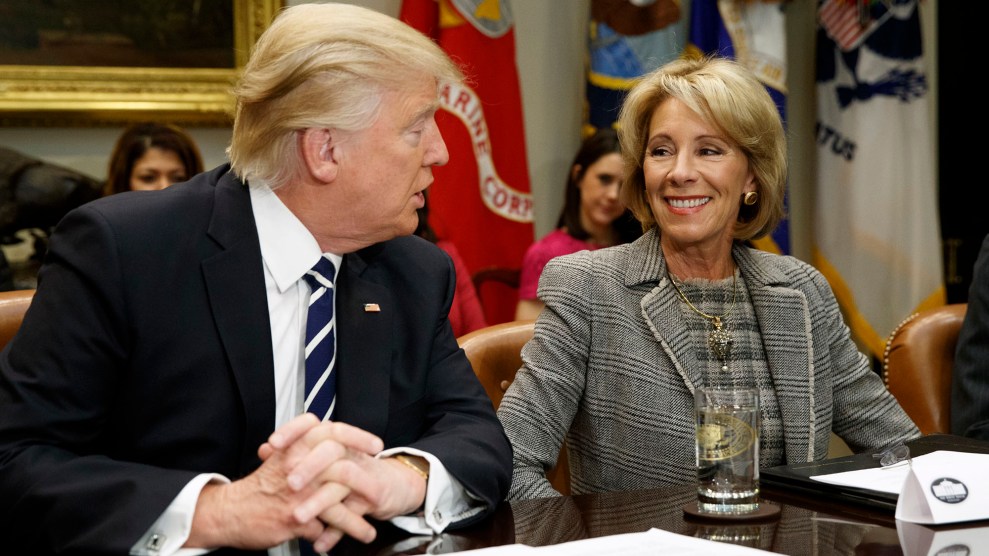 Under a Republican tax bill that experts anticipate would disproportionately benefit wealthy Americans, families would be able to withdraw up to $10,000 a year from tax-free college savings accounts known as 529s and use it for tuition and expenses at K-12 schools, including private and religious schools.

The bill released on Thursday would also:

Some “school choice” advocates would see the 529 expansion as a win. In a statement to Education Week, Education Secretary Betsy DeVos called it “a good step forward” and a reflection “that education should be an investment in individual students, not systems.”

Good policy in the tax plan. Expands ed choice by allowing families to save own money for K-12 expenses; doesn't grow fed intervention in ed https://t.co/D079guG91X

Meanwhile, a coalition of public-school advocates noted in a statement that the bill’s provisions would encourage wealthy Americans to choose private education and ultimately would “redirect larger amounts of funding to private, religious schools.”

Matthew Chingos, a senior fellow and director of the education policy program at the Urban Institute, says expanding 529 accounts to K-12 schools would have little effect on the number of people who choose private schools. “You’d have to have enough money to not just pay for private school but to save for private school,” he says. As Richard Reeves and Katherine Guyot at the Brookings Institution point out, the 529 program currently benefits affluent families, mostly.

The 529 expansion would represent “a decent-sized government handout to people who would send their kid to private school anyway.”

Rather, the expansion would represent “a decent-sized government handout to people who would send their kid to private school anyway,” Chingos says. “If you are trying to save up enough to send your child to a Catholic school for $6,000 a year, the tax benefit on those savings isn’t going to be that much,” he adds. “If you know you are going to send your child to a fancy private school in DC that costs $40,000 a year, then you could start stocking money away into one of these accounts and get a pretty big tax benefit. But who’s going to get that? It’s going to be pretty wealthy people.”

Notably, Thursday’s bill did not include a federal tax-credit scholarship program, an idea that has been floated for months as a possible way to direct money to working-class families to get them to go to private schools. Long touted at the state level by DeVos and the Trump administration, such a program would give credits to people or groups that donate to scholarship-granting organizations. (In August, DeVos told the Associated Press the idea would be part of the tax overhaul discussion.) Congress has so far rejected the administration’s budget requests to fund more charter schools and school vouchers. “If your goal is to expand access to private school to give people more school choice, I don’t think expanding 529s is likely to get you there,” Chingos says.